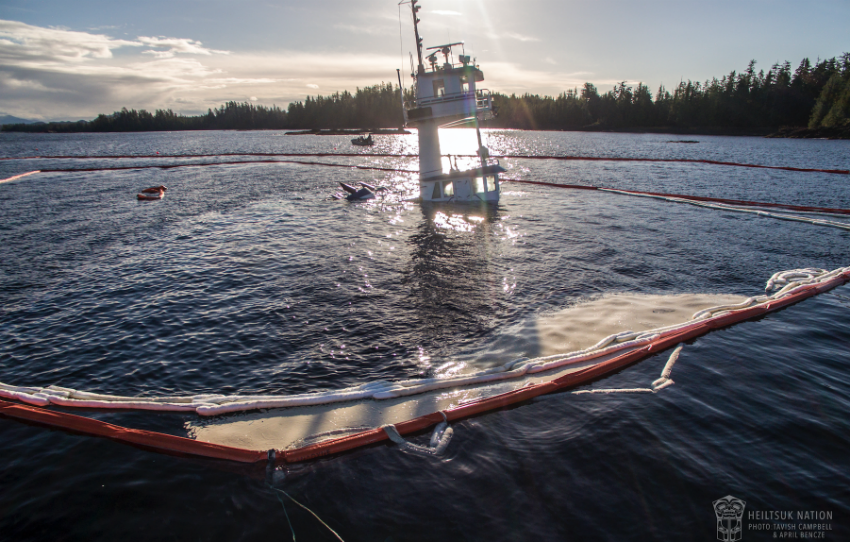 The Transportation Safety Board of Canada says the second mate on the Nathan E. Stewart was by himself on the tug's bridge and had fallen asleep when the tug-barge​ ran aground on Oct. 31, 2016, resulting in the release of about 110,000 litres of diesel fuel in Heiltsuk First Nation territorial waters near Bella Bella, B.C.

In a report released Thursday afternoon, the board recommended the marine industry "effectively and reliably manage the risk of fatigue," according to an accompanying media release.

The board said keeping watch alone on the bridge of the Nathan E. Stewart was contrary to Canadian regulations. It said the second mate had been alternating between six hours on duty and six hours of rest for more than two days.

The safety board is recommending that watchkeepers be trained to help identify and prevent the risks of fatigue, and that all vessel owners have fatigue-management plans tailored to individual operators. It says fatigue has been identified as a "casual or contributory factor" in a number of marine accidents.

The Transportation Safety Board's investigation also found the need for more coordination between the first response agencies, as there was some confusion about roles and who had final authority. The diesel disaster has highlighted concerns raised by many British Columbians opposed to the Trans Mountain pipeline and oil tanker expansion project, approved by the Trudeau government about four weeks after the accident.

The government has said it is addressing gaps on safety and spill response through a new federal Oceans Protection Plan, worth about $1.5 billion over five years.

The 30-metre tug hit rocks and partially sank near Bella Bella while it was towing an empty barge.

Chief Marilyn Slett of the nearby Heiltsuk First Nation has said the fuel spill forced the closure of prime seafood harvesting and fishing areas and has had devastating social, cultural and economic impacts on her people. The Heiltsuk were the first responders to the Nathan E. Stewart's spill. She told National Observer on Thursday that she thought there was "some missed opportunity" to not have a deeper investigation reviewing safety procedures. She added that Indigenous communities along the coast should be consulted in such discussions, given that they know the territory and are often the ones affected the most in the event of a spill.

Commenting on Canada's recent agreement to buy the Kinder Morgan pipeline expansion, which would significantly increase the number of oil tankers to the B.C. coast, Chief Slett said the government still doesn't have a world class oil spill response, and that it's not fully prepared to deal with the possibility of a major spill on the coast.

The U.S. National Transportation Safety Board released a report in November saying the tug's second mate told investigators he missed a change of course after falling asleep, which the board said was the probable cause of the vessel running aground.

It also said there was a lack of documentation on safety rounds and no evidence that safety management rules were implemented on board the Nathan E. Stewart.

Bottom line, as long as it's

Bottom line, as long as it's cheaper to hire less crew than you really need, shipping lines will find ways to do that. It's hard to regulate them effectively because of the way they come and go; you tell a tanker it has to upgrade its practices, it sails away and next time it enters your waters it has a new name and is flying a different flag for a "different" company. So they can talk about improving this that and the other thing, but the risks will not go away.