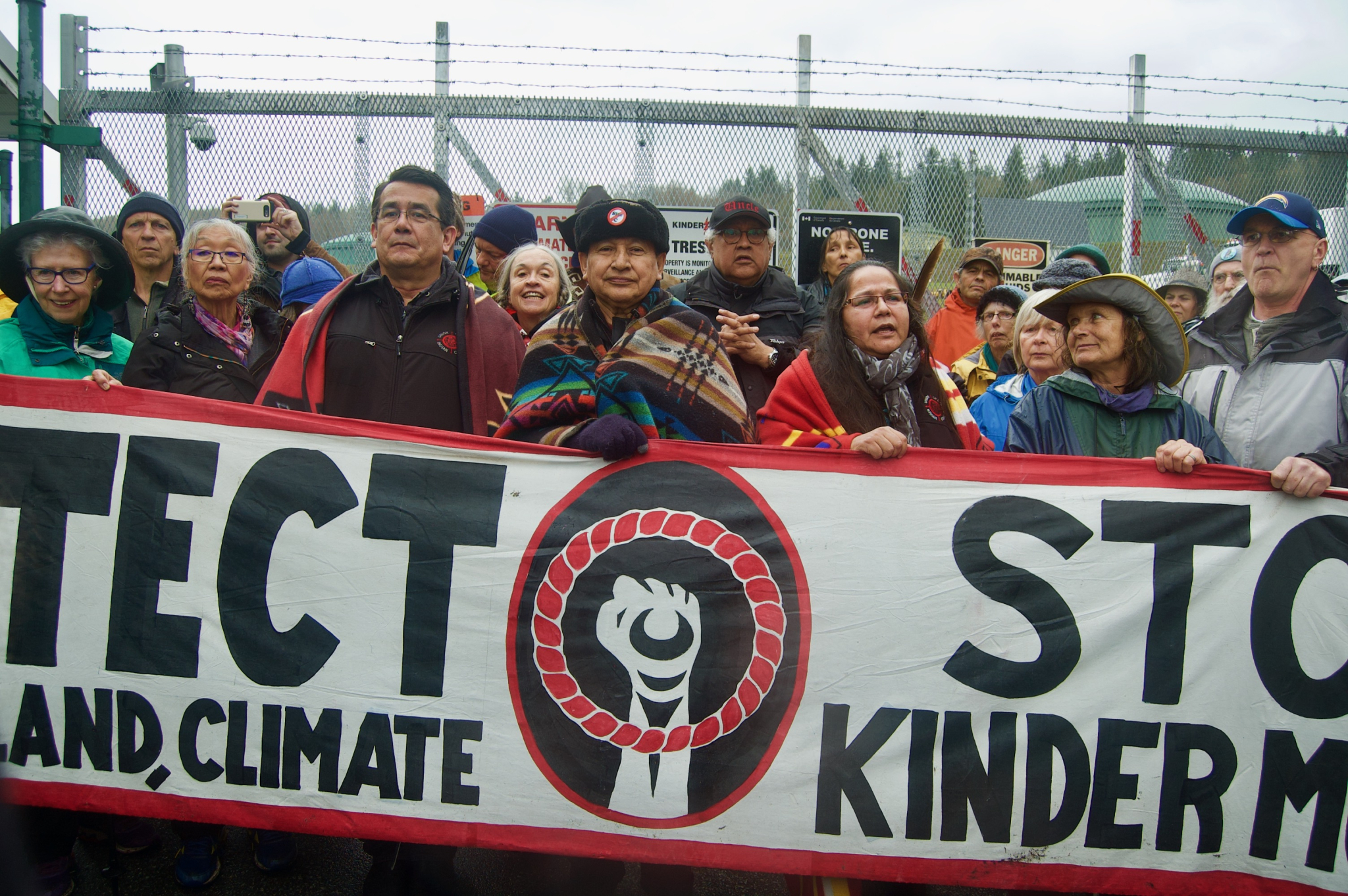 Land defenders and water protectors gather on April 7, 2018 near an exclusion zone on the site of a proposed terminal in Burnaby, B.C., for Kinder Morgan's Trans Mountain expansion. Photo by Dylan S. Waisman
Previous story
Next story

A B.C. Supreme Court judge has granted Texas energy giant Kinder Morgan the power to expand the scope of its injunction across the province, in a bid to keep anti-pipeline protesters away from its property.

Lawyers for Kinder Morgan asked the judge to broaden its March 15 injunction against protesters during a hearing on Friday. The existing injunction imposes a five-meter exclusion zone around its Burnaby Mountain tank farm and Westridge Marine Terminal. B.C. Supreme Court Justice Kenneth Affleck agreed to the lawyers' request to make the injunction applicable to other locations and equipment facilities, and also removed the 10-minute warning period given to protesters before police start making arrests.

Kinder Morgan's Trans Mountain pipeline expansion has sparked significant opposition from B.C., leading to months of civil disobedience, lawsuits and protests. To date, over 200 people have been arrested for violating the court-ordred injunction.

The controversial project would triple the capacity of the existing Trans Mountain system, allowing it to transport up to 890,000 barrels per day of diluted bitumen and other petroleum products from Alberta to a terminal in Burnaby, a city in metro Vancouver. Although the federal government — which recently offered to purchase the existing Trans Mountain pipeline from Kinder Morgan for $4.5 billion — said the project will stimulate jobs and growth, opponents say it brings too many environmental risks for B.C., and would make it impossible for Canada to meet its climate goals.

Kinder Morgan continues to own and operate the Trans Mountain system until its deal with the federal government gets finalized by the end of the summer.

Kinder Morgan's injunction against protester obstruction has also been expanded to include all of the company's contractors and subcontractors throughout the province of B.C..

Trans Mountain lawyer Maureen Killoran explained that the request to expand the injunction was prompted by a May 3 protest, in which two Greenpeace activists climbed a massive piece of drill equipment used to bore tunnels for the pipeline.

She said the company couldn't call the RCMP to enforce the injunction, as the drill's site "wasn't within the definition of a Trans Mountain site."

Defence lawyer Neil Chantler argued that the expansion of the injunction would create a "carte blanche" on any "hypothetical work sites around the province," and result in limiting the freedom of expression of protesters.

Defence lawyer Neil Chantler says the expansion of the injunction would create a "carte blanche" on any "hypothetical work sites around the province," and result in limiting the freedom of expression of protesters. #TransMountainPipeline

Affleck denied that it would have any impact on freedom of expression, saying that protesters are "not entitled to block lawful activity" and that their actions are a "clear attempt to frustrate the injunction." He added that the injunction does not prohibit lawful protests — provided that they do not obstruct Kinder Morgan construction.

The newly updated injunction states that contractors and subcontractors that Trans Mountain intends to include within the scope of its protection must be reasonably identified through signage or fencing.

Changes to the arrest process

Killoran's request to remove the standard 10-minute warning given to protesters before being arrested was also accepted.

Killoran cited a RCMP constable who said that protesters are "taking advantage" of the 10-minute warning by using "waves of persons" blocking the gate, resulting in "only a fraction" of protesters violating the injunction actually being arrested.

Chantler argued, meanwhile, that the removal of the 10-minute consideration time made the injunction "ripe for abuse," and that the words "a brief opportunity" need to be more clearly defined.

Affleck accepted Killoran's request, stating that "those who seek to stop the building of the pipeline are not respecting the 10-minute warning."

In light of the strategy to use waves of persons to block construction, Killoran requested that the nine-page injunction be read aloud over an amplification system, as opposed to police reading it aloud to each new wave of protesters.

Killoran suggested that reading the injunction to each person causes unnecessary delays for the RCMP, who spend up to nine hours working on days when protests take place at the injunction zone.

The strategy, she said, was conducted by organizers leading the activist movement. She cited two affidavits by private investigators who were hired to mingle among the protesters and receive training before the protest action. The two investigators took notes and photos, chronicling how organizers gave protesters information about the injunction and advice on how to avoid or risk arrest.

To expedite the process, Affleck agreed to allow the injunction to be read over an amplification system, so that all protesters in the vicinity, including those not yet breaking the injunction, would be warned of the consequences of doing so and are therefore immediately eligible for arrest upon crossing the injunction line.

Welcome to Kinder Kanada Korporation. If you don't respect our universal border you will be immediately arrested by the Royal Corporate Mounted Police.

Thanks for your coverage of

Thanks for your coverage of this. Have you read the just released Policing Indigenous Movements: Dissent and the Security State by Crosby and Monaghan? It's a scary read but the information in it makes this whole Kinder Morgan catastrophe make sense.

Justice Affleck’s decisions do not reflect community standards. Perhaps he should be reassigned!

Affleck throughout has not

Affleck throughout has not given the impression of impartiality or disinterest. Not a huge surprise--we can presume that most current BC judges are Liberal appointees, and all, before they were judges, were lawyers, trained to be rabidly partial.

One can only wonder what the

One can only wonder what the Supreme Court justice is thinking? Is he siding with the crooks at Kinder Morgan or just thwarting dissent at every opportunity? One wonders where he got his training from? the corporate sector no doubt. If this sounds like contempt of court ..it isn't. The court in my humble opinion is so far below contempt that it is not in my interests to think that.