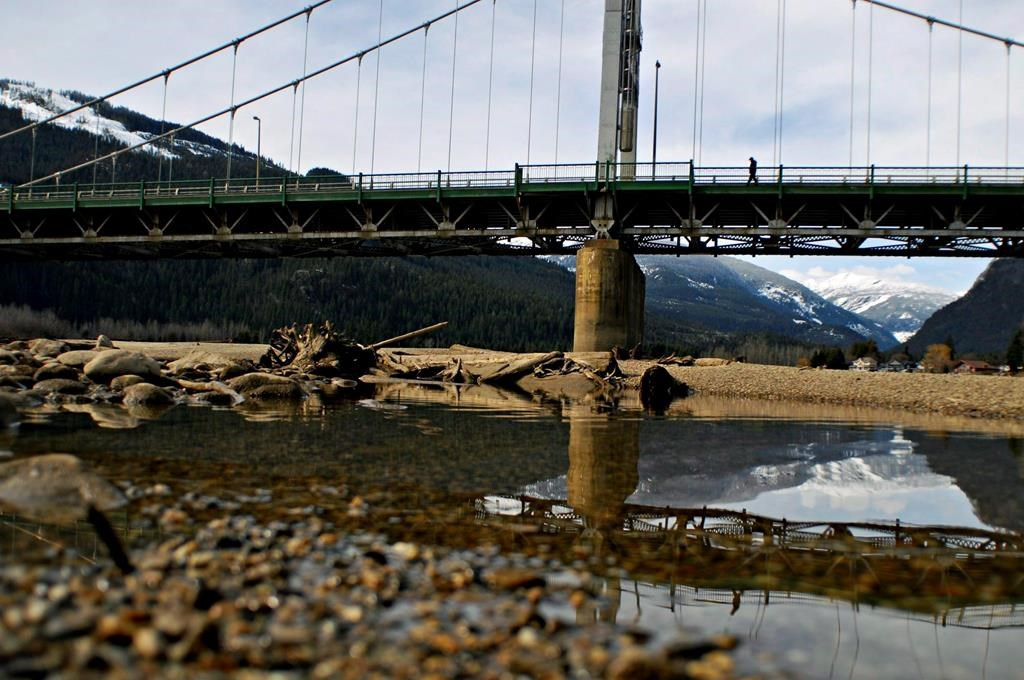 A man crosses a bridge over the Columbia River in Revelstoke, B.C., on March 14, 2010. File photo by The Canadian Press/Daniel Hayduk
Previous story
Next story

Canadian negotiators are resisting U.S. attempts to increase the amount of water released into a major waterway that flows through British Columbia and the Pacific Northwest.

"We have to make sure we're paying attention to our side of the border and the issues around maintaining certain levels of water in the river," said Katrine Conroy, the B.C. cabinet minister who's monitoring talks which began this week in Washington, D.C., on updating the Columbia River Treaty.

The two countries signed the treaty in 1964, but its flood control measures expire in six years and the United States has asked for talks to modernize its provisions. Although it originally only concerned flood control and power generation, the Americans want to add environmental measures.

That would mean being able to request more water from Canadian reservoirs to improve salmon habitat in the U.S. reaches of the Columbia.

"We seek greater co-ordination with Canada on the appropriate quantity and timing of water releases to help support a healthy ecosystem," said a senior U.S. official speaking on condition of anonymity.

Canada would love to see salmon return to the heavily dammed Columbia, said Conroy. But it has concerns about sending more water south.

"I know it's a concern for people in the basin."

Conroy points out the reason there are no salmon in the Columbia is that the Grand Coulee dam in Washington blocks the fish from moving upstream.

The water issue stems from U.S. environmental legislation that requires American authorities to improve the river's environmental quality and salmon habitat, said Bruce Maclock, a consultant who's part of the treaty's science advisory group. Maclock said those rules have forced U.S. authorities to release more water from their reservoirs, which has depleted the amount available for power generation.

"The American legislation is what's pinned them to the wall to have to release a lot of water for fisheries migration and not power generation."

The Americans are doubly concerned because the treaty obliges them to send north electricity worth between $150 million and $200 million a year. The U.S. is also seeking a reduction in that Canadian entitlement.

The Canadian water would be especially helpful for salmon, Maclock added.

"They need cold water. Where is most of that? It's in the Canadian reservoirs."

Nigel Bankes, a professor of resource law at the University of Calgary, suggests Canada should be cautious about promises of renewed salmon runs in its part of the Columbia.

"It might happen one day but it's a very long-term prospect."

He said the U.S. might be seeking to have environmental measures added to the treaty as a way of gaining influence over Canadian reservoirs not currently covered by it.

"They want the non-treaty storage brought into the treaty arrangement."

The U.S. official downplayed those concerns.

A Canadian environmental group says a renegotiated treaty should include measures to improve the Columbia's ecology.

"It's a very complex technical problem that involves a lot of different changes both sides of the border," said Lars Sanders-Green of the group Wildsight. "It's part of a whole package that there would be some flow changes from the Canadian dam."