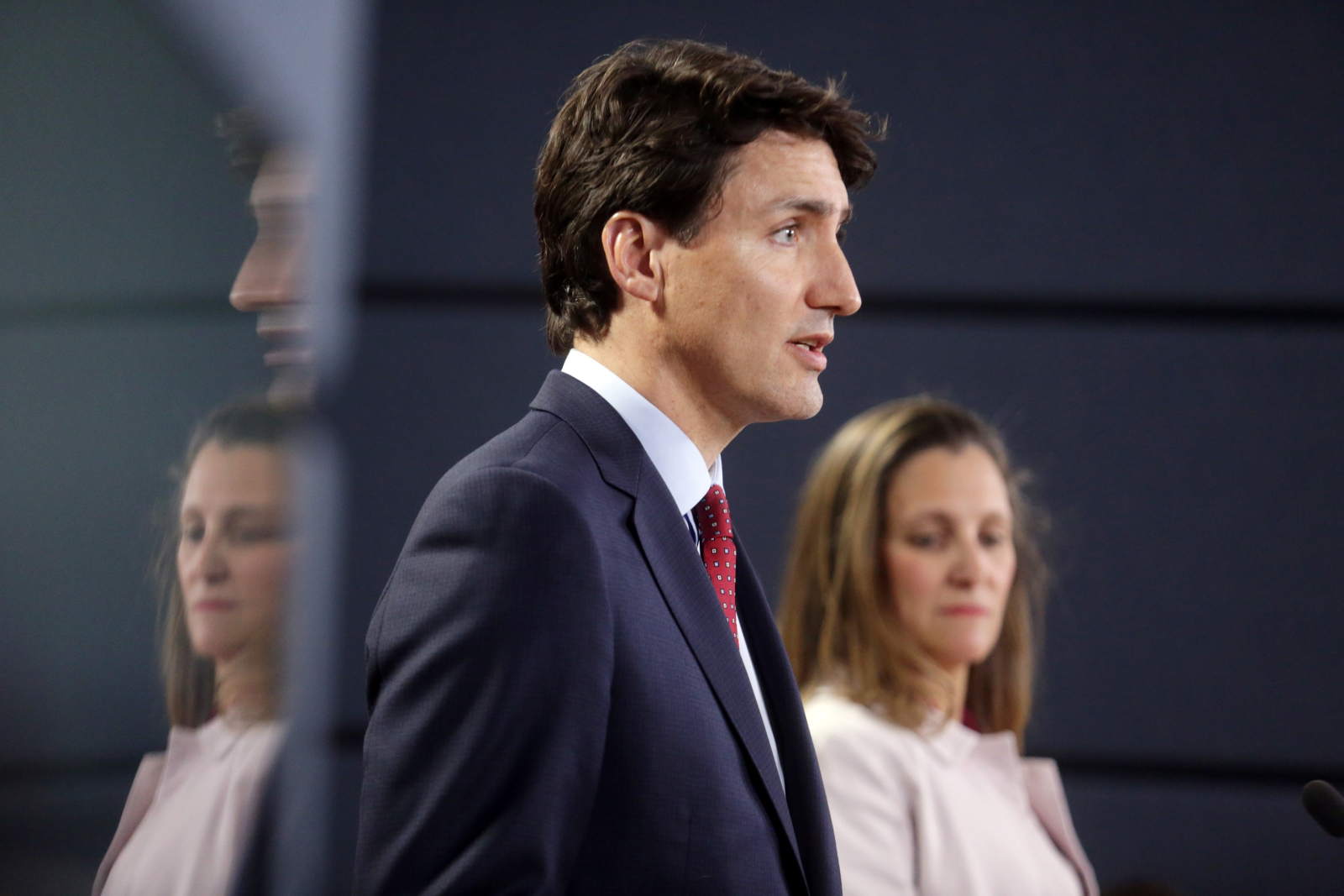 Environmental policy experts are watching to see if Prime Minister Justin Trudeau can deliver a strong outcome on climate change at this week's G7, as the U.S. continues to avoid consensus deals and Canada faces backlash over its pipeline purchase announcement.

The issue of climate at the summit in Charlevoix, Que. remains front and centre in civil society, as more than 45 foundations around the world called on the G7 on Tuesday to put its commitment to phase out fossil fuel subsidies by 2025 into action.

That call comes on the heels of a new report from environment and development groups that showed G7 nations continue to shovel at least $100 billion a year in subsidies toward coal, oil and gas.

Yet the leaders of the world’s seven advanced industrialized nations are still battling it out over fundamental policy differences, in a last-ditch effort to come to a consensus and issue a joint statement agreeable to all at the end of the June 8-9 summit, Canadian government officials confirmed Tuesday.

“We are working on bridging the differences that exist and bringing people together,” said one official speaking on background.

Meanwhile, Canada’s credibility on green causes has been questioned following its announcement of its intent to purchase the Kinder Morgan Trans Mountain pipeline expansion with $4.5 billion of public money.

Trudeau has spent months pushing a set of themes for the summit that includes “working together on climate change.” But his focus is also on achieving a deal on oceans protection and plastics that environmentalists warn might take too narrow a view on climate.

Officials said Tuesday that resilient coastal communities, plastics and the biosphere will serve as the components of that oceans plan.

“Later this week at the G7 summit, we will bring world leaders together to discuss how we can reduce plastic pollution, tackle climate change, and improve the health of the world's oceans,” said Trudeau in a World Environment Day statement.

The government also marked the day by naming a new climate change ambassador, Patricia Fuller, filling a position that had been vacant for about six months, following the departure of Jennifer MacIntyre, who resigned in December following the sudden death of her husband.

"Climate change is a global challenge that requires a global solution‎," Trudeau said in a statement as he announced the diplomat's new appointment. "Everywhere, we are seeing the effects of climate change reminding us of the need to act now. Canada's new ambassador for climate change, Ms. Fuller, is here to lead Canada's efforts and work in collaboration with the global community to tackle climate change and promote clean economic growth."

Catherine Abreu, executive director of Climate Action Network Canada, said negotiations over plastics and oceans will have to involve a broader discussion about economic links between the oceans and the climate.

“You can’t talk about plastics, which are produced using petroleum, or oceans, which interact with the atmosphere, without talking about climate change,” she said in a Tuesday briefing of policy groups ahead of the summit.

In addition to oceans and plastics, Abreu said she will be watching for three other elements to come out of the summit: an affirmation of the Paris climate accord, given that six of the seven countries are committed; language around climate financing and the green climate fund, as G7 nations are donor countries; and mentions of a "just transition" for coal, oil and gas workers as fossil fuels are phased out.

Canadian officials can barely hide their frustration after Canada was hit by the Trump administration’s tariffs on steel and aluminum, and as U.S. President Donald Trump continues to threaten to blow up the summit over his isolationist stances on climate change, trade and other topics.

The Canadians have taken to describing the G7 as a venue for “frank” discussion where leaders can have disagreements and even interrupt each other.

The summit agenda shows a G7 working session on the second day of the summit devoted to "climate change and clean energy." Leaders, including Trump, would be included in this session, officials confirmed.

But it's unclear what sessions Trump will actually show up for, or even what his general schedule will be.

“The U.S. hasn’t really shown any willingness to find any compromise, and we’ve also seen a hardening stance of the U.S.,” said Luca Bergamaschi, senior associate at E3G and the 2017 Italian G7 presidency’s lead advisor on climate change and energy, in the Tuesday environmental briefing.

Last week, the U.S refused to join a consensus statement from the Organisation for Economic Cooperation and Development’s ministerial council meeting on the multilateral trading system. Bergamaschi said this G7 will be a major test to see if differences introduced by Trump are here to stay.

Environmental advocacy groups in Canada and Europe say a key difference from last year’s G7 summit is that European officials appear less willing to compromise in order to appease the United States. This, they said, was even more so after some European nations were also targeted for the tariffs.

Germany wants the summit to issue a joint communiqué, or statement, signed by all the leaders, that covers climate, on the basis that the G7 represents a multilateral forum with shared values and shared responsibility, Berlin-based Clean Energy Wire has reported.

A June 3 report by the UK development think tank, Overseas Development Institute, Oil Change International and several other groups found that, despite pledging to ditch fossil fuel subsidies since 2009 — and giving a deadline in 2016 that they would phase them out by 2025 — G7 countries still hand about $100 billion US per year in fiscal support and public finance to oil and gas companies and coal firms.

Editor's note: This article was updated at 12:30 p.m. ET on June 6, with additional information about the appointment of Canada's new climate change ambassador.

Justin should offer all G7

Justin should offer all G7 members attending the summit shares in the Transmountain pipeline...just to show he's determined to put a cap on Canada's carbon footprint. No, that statement doesn't make any sense. Neither does Mr. Trudeau.

Thanks for the article.
World get ready for more meaningless puppet meetings that will accomplish nothing.
Anyone who says,
"Climate change is a global challenge that requires a global solution‎," Trudeau said in a statement as he announced the diplomat's new appointment. "Everywhere, we are seeing the effects of climate change reminding us of the need to act now. Canada's new ambassador for climate change, Ms. Fuller, is here to lead Canada's efforts and work in collaboration with the global community to tackle climate change and promote clean economic growth."
and follows with actions like spending 4.5 Billion $ during a 'recession' on the purchase of a pipeline who's contribution to the environment should be considered criminal, is a mouth piece who is towing the line for his masters.

I suspect the nature of these talks will revolve primarily around PR.

Specifically, how best to continue to ignore the science while seeming concerned.