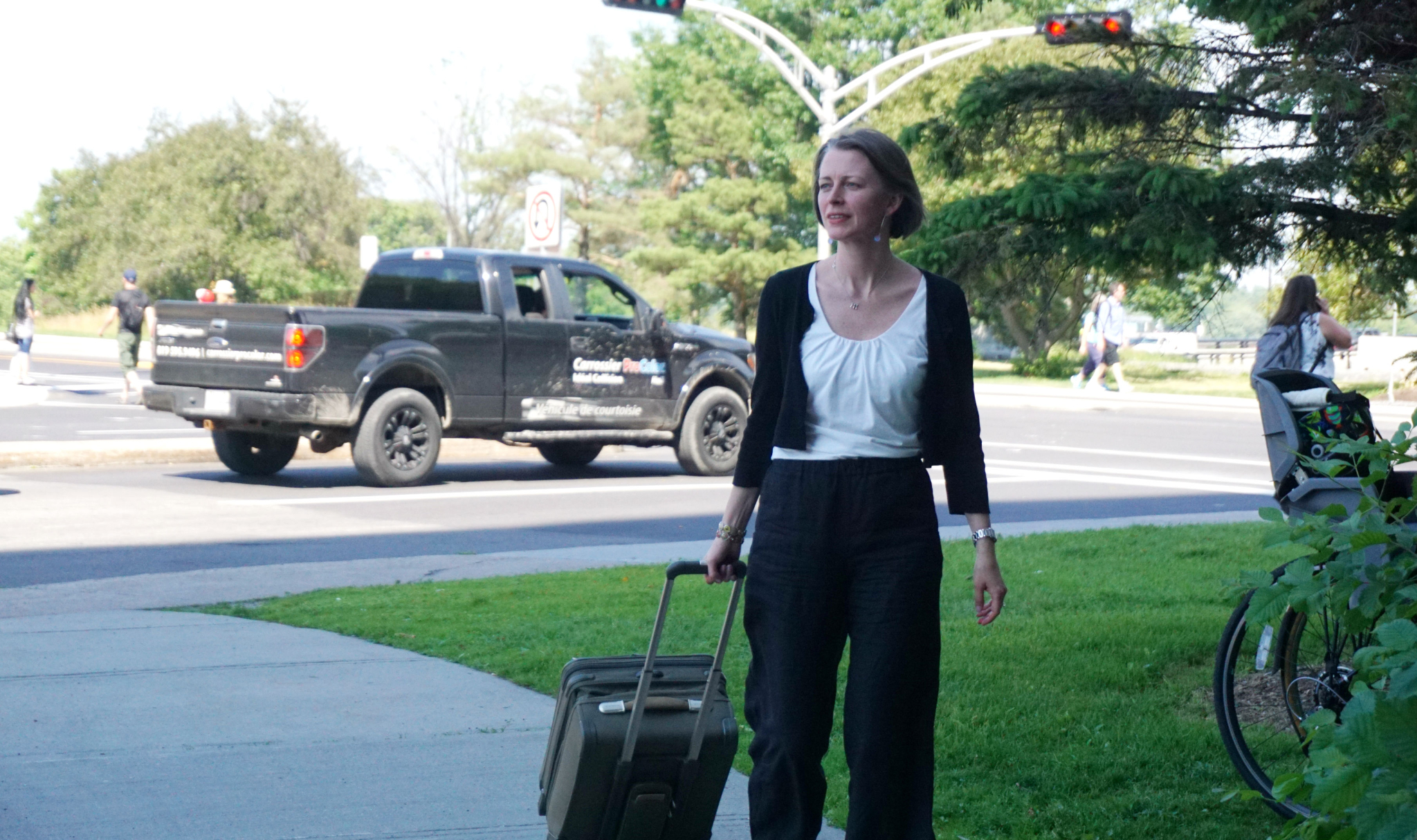 Canada's new climate change ambassador, Jennifer MacIntyre, catches some fresh air outside the Environment and Climate Change Canada building in Gatineau, Que. before catching a flight to Toronto for meetings on July 6, 2017. Photo by Elizabeth McSheffrey
Previous story
Next story

As a diplomat with 15 years of international experience, she has learned that no matter what obstacles arise during negotiations, the most important thing is to keep communication channels open.

“When you encounter a challenge, you just keep talking and you keep moving forward,” she says. “At the end of the day, diplomacy is not always about agreeing. It’s about having a frank exchange and looking for common ground.”

MacIntyre's approach to the United States

MacIntyre, 42, has her work cut out for her — as ambassador, she is charged with advancing implementation of the Paris Agreement on climate change, and promoting Canada’s climate plan and clean technology on the world stage.

But she weaves her positivity seamlessly into an interview with National Observer, little more than a week after starting the new position.

Asked what challenges she foresees as she carries out her mandate, she points to figuring out “which of the many opportunities to chase first.”

Asked how she will approach a U.S. administration that has pulled out of the Paris Agreement and called for the rapid approval of new fossil fuel pipelines, she responds:

“At the same time, it’s really exciting to see how many U.S. states, businesses, cities…are stepping up and saying, ‘No, we’re still committed to climate action and we’re moving forward.’ So my approach to all of our international partners will be to work very closely together with those who, together with Canada, are interested in moving forward.”

Securing Canada's "piece of that pie"

McIntyre’s appointment comes at a critical time. She is the first Canadian climate ambassador since the signing of the historic Paris Agreement, which aims to keep global warming below 2 C this century. A two-degree increase could spell catastrophe, scientists warn — through drought, ocean rise, crop failure, wildfire, flooding, and disease.

At the G20 summit in Germany last weekend, U.S. President Donald Trump refused to endorse climate action as part of a G20 communiqué on leaders’ priorities. Trudeau did endorse this addition, but closer to home, Canada is on track to fail its 2030 targets to reduce climate-warming greenhouse gas emissions.

What happens if MacIntyre can’t find “common ground” with other countries as she carries out her three-year mandate?

She says such speculation is dangerous as a diplomat. She remains focused on the financial and partnership opportunities presented by a post-Paris world.

“For me, the timing (of this position) is absolutely perfect, because as I said, it’s kind of this moment in time where we have this tremendous opportunity for our country to really take a leadership role in moving the world towards great climate action and promoting clean growth.

MacIntyre is the fifth person to hold the title of ambassador for climate change — but the first where the role is not the equivalent of Canada’s chief negotiator for climate change treaties. Asked why the role has changed, she said it the new mandate is focused on seizing the enormous opportunity for international collaboration on climate action and solutions.

“Canada still has a chief negotiator who remains focused on the technical aspects of the climate negotiations," she explains. "But this is a reinforced mandate...that is much more focused on this post-Paris world, where there’s tremendous opportunity to really play a leadership role on climate action, work with our international partners in a really concrete way to take steps to reduce our emissions and encourage others to do the same.”

MacIntyre is the first woman appointed to the job and will advise the ministers of environment, foreign affairs, international development and international trade on "mainstreaming climate change considerations" in Canada's international priorities.

According to the World Bank, the climate commitments made by signatories of the Paris Agreement represent a $23-trillion investment opportunity in clean growth, including renewable energy and smart transit and infrastructure. MacIntyre says she will work hard to make sure Canada has “a piece of that pie.”

For the rest of the summer, MacIntyre says she’ll be meeting with top climate scientists and stakeholders to familiarize herself with the climate portfolio and its intricacies. Before accepting the position, she worked as the acting director general of multilateral and bilateral affairs for Environment and Climate Change Canada.

MacIntyre holds degrees in journalism and public administration, and has previously served as Canada’s ambassador to Switzerland, executive assistant to Canada’s ambassador in Washington, and as the deputy director responsible for Canada’s nuclear security programming in the Russian Federation.

By Elizabeth McSheffrey | News, Energy, Politics | May 23rd 2017
Race to a Safer World