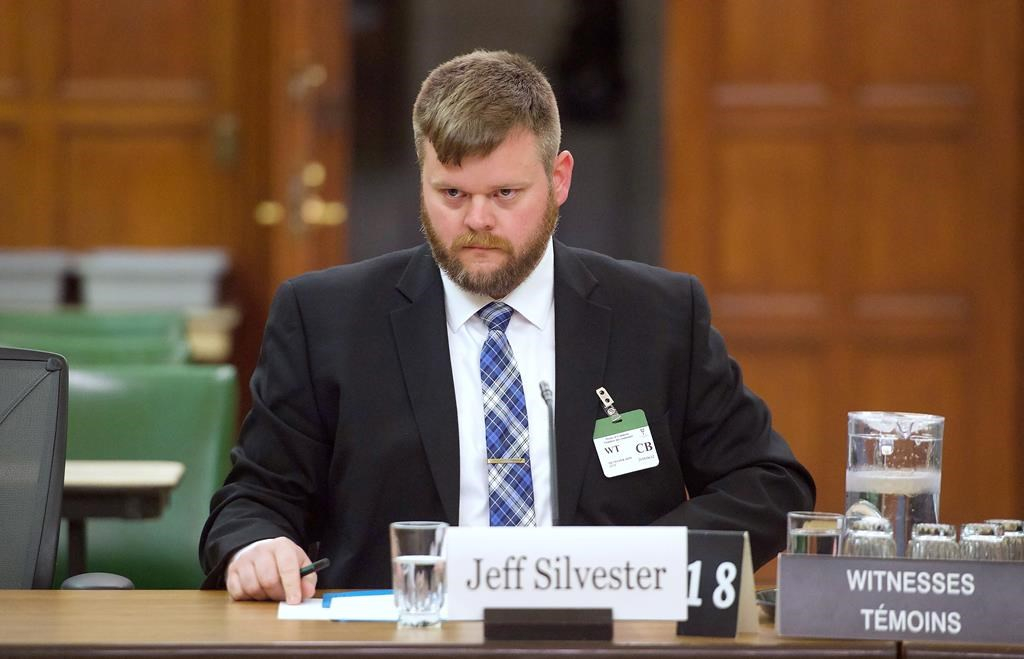 Jeff Silvester of AggregateIQ appears at the House of Commons ethics committee on the breach of personal information involving Cambridge Analytica and Facebook in Ottawa on June 12, 2018. Photo by The Canadian Press / Sean Kilpatrick
Previous story
Next story

A member of Prime Minister Justin Trudeau's caucus says it is "plausible" that a Canadian advertising company’s software tool was used in the successful 2016 campaign of U.S. President Donald Trump.

Nathaniel Erskine-Smith, the House of Commons ethics committee vice-chair, made the comments after a senior executive of the firm, AggregateIQ, told MPs Tuesday that “it looks as though” the firm’s political relationship tool had been fed personality profiles that were developed from data that was originally vacuumed up from Facebook using a quiz app.

That data was then improperly passed to political campaigning firm Cambridge Analytica and parent company SCL. Christopher Wylie, a data scientist from British Columbia, went public in March about his involvement with SCL and its connections to the Trump campaign.

But the executive, Jeff Silvester, insisted during a three-hour committee hearing June 12 that he was unaware of the ill-gotten data at the time, contrary to testimony by Wylie at the committee two weeks ago.

“With the information that has come out now, it looks as though they (Cambridge Analytica) may have used, indeed, that Facebook information in order to come up with that scoring (of people’s profiles)," Silvester said, referring to a method of picking people to target with political ads. "It appears to be the case."

The firm has never had access, or even viewed, the data in question, he added. “The information that we got was that it was from public data sources,” he said. “We were unaware that they were obtaining information improperly at the time.”

The comments by the Trudeau Liberal, Erskine-Smith, about Trump’s election came as the American president vowed to punish “the people of Canada” over the prime minister’s closing remarks at last weekend’s G7 summit regarding the U.S. decision to impose tariffs on Canadian-made steel and aluminum.

Silvester was in Ottawa to clarify concerns from MPs on the House of Commons ethics committee over testimony he and his colleague gave in April, as part of the continuing fallout from the data scandal. The firm is also connected with work done on Brexit campaigns for the United Kingdom to leave the European Union.

Silvester has maintained he was unaware of the data's origins, despite Wylie's testimony two weeks ago that Silvester had told him the work AggregateIQ was doing was “totally illegal.”

“I don’t recall ever telling him I thought it was illegal,” Silvester reiterated Tuesday to the committee. “We did speak about the media, and what they thought. Perhaps he interpreted what I was saying about the media as me saying it myself. I don’t know.”

Speaking after his committee appearance, Silvester called Wylie's accusations "astonishing" and said "I know I’m telling the truth and I’ve always told the truth. I don’t know why he’s saying some of the things he’s saying."

'Plausibly it was used in the Trump campaign'

The relationship tool, called Ripon, was largely funded by hedge fund billionaire Robert Mercer and daughter Rebekah, through the Republican leadership campaign of Ted Cruz, according to an investigation by Mother Jones.

When Cruz dropped out of the race, the news outlet reported, the Mercers shifted to Trump, getting his campaign to hire Cambridge Analytica and install Stephen Bannon, who was vice president on the firm’s board, as chief executive of Trump’s campaign.

Bannon, who went on to serve as senior White House counselor to Trump before being jettisoned, was also a former chairman of Breitbart, a far-right news site that Mercer invested in.

In September 2016, Cambridge Analytica’s then-CEO Alexander Nix boasted to a crowd in New York that the firm had developed personality profiles that could predict the political leanings of Americans, and that “of the two candidates left in the election, one of them is using these technologies,” meaning Trump.

It is now clear that those profiles were developed from data that was obtained via a quiz app on Facebook’s platform called “This is your digital life,” made by University of Cambridge lecturer Aleksandr Kogan. The app was able to grab the information on users and their friends, thanks to Facebook’s earlier, more open data-sharing policy.

Kogan then broke Facebook’s policies, the company says, by passing the data he gained from the quiz app to Cambridge Analytica. In March, Facebook suspended the firm and Kogan’s accounts, and in April it kicked AggregateIQ off its site after U.K.'s The Guardian reported on links between the two firms.

Facebook, which has since changed its data-sharing rules, has now undertaken an investigation of its own, suspending hundreds of apps and committing to new restrictions around political advertising.

The fallout from the scandal has led to a flurry of activity from lawmakers and watchdogs in Canada, the United States and the United Kingdom as they probe the connections between social media and the democratic process.

Silvester has repeatedly said the company doesn’t harvest data itself and, with regards to the Brexit campaigns, has not broke U.K. election laws. AggregateIQ has also maintained it is an independent company and not a franchise of SCL.

Firm's CEO a no-show due to health reasons

The committee had hoped to hear from Silvester’s colleague, the firm’s chief executive officer Zackary Massingham, who Silvester said couldn’t attend due to health reasons.

During the executives’ last appearance before the committee, Massingham said he wasn’t sure about several details in connection with the Brexit campaigns, and the committee was hoping to follow up.

“He would have liked to have been here,” Silvester said, but said he was not well enough. He declined to disclose in public the specific nature of his medical issue.

"What we’re trying to do here is get at the facts. We have no axe to grind with AggregateIQ. Your evidence is as valuable to us as anyone else’s," NDP critic Charlie Angus told Silvester.

"We’re very frustrated because we felt the last time that your colleague, Mr. Massingham, was not forthcoming at all and we have a number of questions."

But the committee issued a summons for Massingham to attend, said Erskine-Smith, and “he has clearly refused to attend in the face of that summons.” He said the committee would consider a formal complaint to the House over the issue.