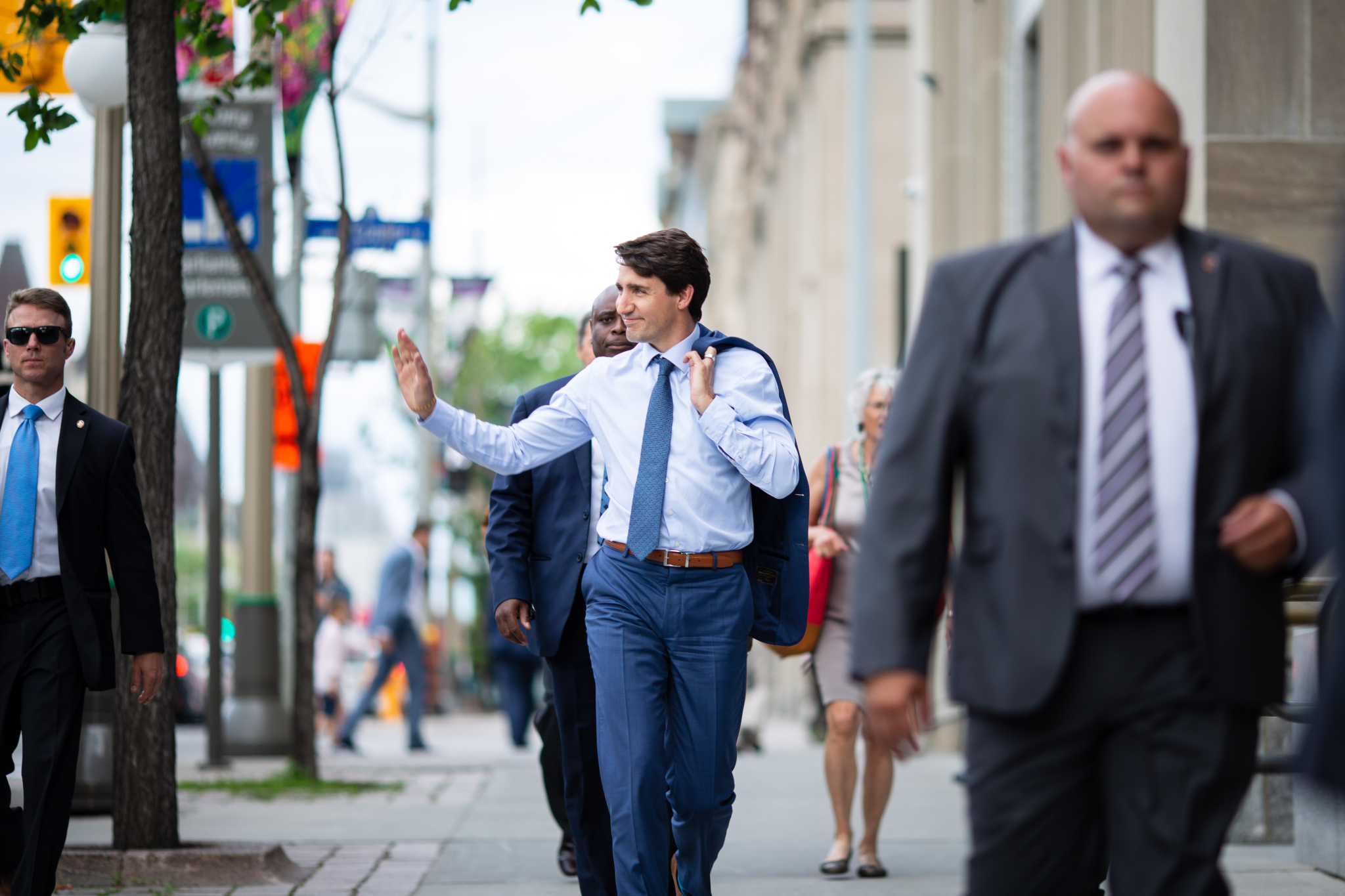 Prime Minister Justin Trudeau waves as he walks toward a news conference in Ottawa on June 20, 2018. Photo by Alex Tétreault
Previous story
Next story

A disappointed Prime Minister Justin Trudeau said Wednesday that he was planning an intervention after learning that Ontario premier-designate Doug Ford was withdrawing from a national climate change plan.

“On the environment, the premier-designate has notified us that he intends to withdraw from the national climate plan," Trudeau told reporters at a news conference marking the end of the parliamentary session in Ottawa on Wednesday.

"This is obviously unfortunate, we would rather he not do that, but since he’s notified (us) that he’s withdrawing from the national climate change plan, we need to continue to ensure that we move forward on both growing the economy and protecting the environment at the same time."

The federal government had not previously planned to intervene in Ontario, as it had said it would have accepted the outgoing Liberal provincial government's plan to price pollution using a cap and trade system.

Trudeau's pan-Canadian climate change framework was a 52-page roadmap, signed in December 2016 with provincial and territorial leaders as part of efforts to achieve Canada's international commitments under the Paris agreement to achieve a 30 per cent reduction in annual greenhouse gas emissions below 2005 levels by 2030.

All political parties in the House of Commons have agreed to this target as a minimum goal. Conservatives have said they disagree with requiring polluters to pay for emissions, but have not proposed any alternative solution.

The national framework from 2016 also includes new building codes to reduce energy consumption in homes and businesses, additional electric charging stations in support of zero-emission vehicles, as well as policies to reduce pollution from government operations.

Although Ford has not explicitly spoken about the entire pan-Canadian strategy, Trudeau's office said that the prime minister has taken the premier-designate’s stated intent to kill cap and trade as evidence enough that he will abandon the framework too.

Having its cap and trade system in place was the only way that Ontario, Canada's most populous province, planned to contribute to meeting the national carbon pollution reduction target, the prime minister’s office said.

The notice from Ford would undo a commitment made by outgoing Premier Kathleen Wynne who signed on to the national strategy in 2016, noting, at that time, that it supported the province's "transition to a low-carbon economy by encouraging innovation and helping us maintain our competitiveness."

At his news conference in Ottawa, Trudeau indicated he wouldn't be stopped by the opposition to his plan from conservative politicians.

"As I’ve said many times, we’re going to ensure that monies collected in any jurisdiction are returned to the citizens of that jurisdiction," Trudeau said.

"And I will highlight that the legislation we just passed, allows us in cases of using the federal backstop to directly return monies collected in Ontario to Ontarians. And that is certainly our intention to do that, unless provinces like British Columbia, for example, move forward with their own sufficiently ambitious plan — which B.C. has had for a long time — to meet our climate targets.”

Ford's rejection of the plan came after a week in which the provincial Progressive Conservative leader had announced Ontario was abandoning a joint cap and trade market with Quebec and California, designed to stimulate green jobs and growth, while discouraging business activity that contributes to climate change.

This was followed by an announcement that Ontario was also shutting down a provincial green fund offering rebates and other incentives to encourage green renovations and savings on home energy bills.

But Trudeau also said he was committed to working collaboratively with all premiers, including Ford, to make life better for Canadians.

His disagreement with Ford comes as Canada faces a looming trade war with U.S. President Donald Trump's administration, that has threatened to impose tariffs on Canadian-made steel and aluminum.

Trudeau said he plans to continue fighting for Canadian jobs, also encouraging the population to "buy Canadian" products and take vacations at home.

He also noted that that many Canadians depend on the success of the auto industry, another target recently mentioned by Trump, but that he would continue to stand up for Canada's interests.

When asked to comment on the president's recent personal attacks posted on Twitter, Trudeau said that Trump “prides himself on a certain degree of unpredictability.”

"I'm not in a position to opine on motivations of the president," Trudeau added.

Earlier in the day, Trudeau spoke about the government's new cannabis legislation, that is set to come into force this fall.

He told the House of Commons during the daily question period that the substance would become legal on Oct. 17, 2018.

That’s a bit later than many analysts had expected, due to the prime minister’s long-standing position that it would be available by the “summer” of 2018.

During his press conference, the prime minister explained that the later date was because he had granted provincial requests.

“The provinces have asked us for more time than they originally thought that they’d need in order to get the implementation right,” he said.

“I think we all agree it’s important to get this right, and not rushed, and that’s why we’re moving forward with the legalization coming-into-force date as of October 17, 2018.”

Trudeau will ‘look at’ pot amnesty after legalization

Some commentators have wondered whether the government will continue to jail people for marijuana-related possession offenses once cannabis is legal.

Trudeau said on Wednesday that he would “look into” that, but not until after Oct. 17.

“Once it comes into effect, then we will look into the whole question of amnesty and pardons,” he said.

“Until the actual coming into force date happens and the law is changed, there’s no point in looking at pardons while the old law is on the books.”

He also defended the government’s rejection of the position of some conservative senators to ban home grow, comparing it to allowing Canadians to grow tobacco.

Our self proclaimed leader

Our self proclaimed leader must realize that as an inept twit his opinions no longer matter either to his dismayed backbenchers let alone the well voiced opposition. One must believe that those who voted for him are obviously members of the no contribute society. Non taxpayers, non property owners and non job holders must think that the mPM is a hero. He may be but his hero bar is quite low and dropping along with his support of the $.
Sad eh!

Yes, I look forward to

Yes, I look forward to bidding Mr. Trudeau adieu in October 2019. Then we will get to work undoing the many wrongs of the Justin era.

I pay taxes, and plenty of

I pay taxes, and plenty of them, own property, self employed and support Trudeau and his team totally. We had the worst PM in history named Harper and I never want to see his kind in office again.
PMJT heroes bar has had a mid term sag because of the sunless slagging from Scheer Nonsense who hasn't a decent proposal for us ever. Get used to PMJT being your PM for the next ten years during which I will pay taxes own my property and my business.

Justin highlights the "returned monies." The cost of most everything will go up and his returned monies will not begin to cover the taxpayer's costs....ie food, transportation, heating and so on.

Well for a start Trudeau, you

Well for a start Trudeau, you could reverse your insane KM pipe dream purchase to help Canada further reduce our GHG emissions, and then stand firmly up to Doug Fossil Fool with the majority of Canadians backing you up!

It's hard to face reality.

It's hard to face reality. For all of us I'm coming to believe, it's hard to change.

But that Ontario voters would choose cheap beer and a climate no nothing for the sake of some penny pinching savings...that as usual, will come out of the environment we all depend on, speaks volumes to how short sighted many of us still are.

A carbon tax is a necessity, if we are to combat the climate catastrophe bearing down on all of us. What's important, is that the money raised be used to transition.......and help those citizens who will bear the greatest losses during transition. But those losers are a minority. For most of our children, green jobs are going to be far more plentiful than anything left in the old economy....and those green jobs will be building a better world for all..........not doubling down on a rust bucket pipeline because an industry that accounts for less then 5% of our national GDP wants us to believe we're totally dependent on fossil fuels for our prosperity.

It's silliness and foot dragging...when we need real entrepreneurship and bold leadership. Get on it Justin....slap that carbon tax on Ontario and direct the money to people smart enough to understand the physics of climate change. Most Canadians are with you....or will be very shortly. Extreme weather isn't going away.

Re article on Canada's

Re article on Canada's climate plant - from Coast to Coast am interview (an interesting possibility) on June 18 by Tim Ball: In the first half, retired professor of Climatology and now Chairman of the Natural Resources Stewardship Project, Tim Ball discussed how climate data has been manipulated and politicized. Instead of global warming, we're actually in a cooling trend, he contended, and in America, the 1930s were much warmer than the 1990s. To put things in perspective, he continued, if you look at the last 12,000 years, about 95-96% of the time was hotter than it is today, and what we've been experiencing is just natural variability.

"The idea that CO2 is a pollutant is part of the deception," Ball declared, as well as the notion that global warming is due to human activity, which began in 1988 and gained traction with Al Gore's documentary, An Inconvenient Truth. Ball believes the environmental agenda around climate warming is a kind of propaganda used to gain political control and foster globalism. He noted that increased volcanic activity and the corresponding geothermal heat could be an overlooked factor that affects climate. Responding to a question about chemtrails, he suggested that rather than a nefarious plot or attempt at climate control, what people may be seeing is the effects of increased air traffic to Asia.

Let's hope that the feds

Let's hope that the feds decide to return the carbon tax money directly to Ontarians. That may give the people a taste of what a real tax-and-dividend system looks like. Most people, and especially the less well-off, will find out that they're coming out ahead.