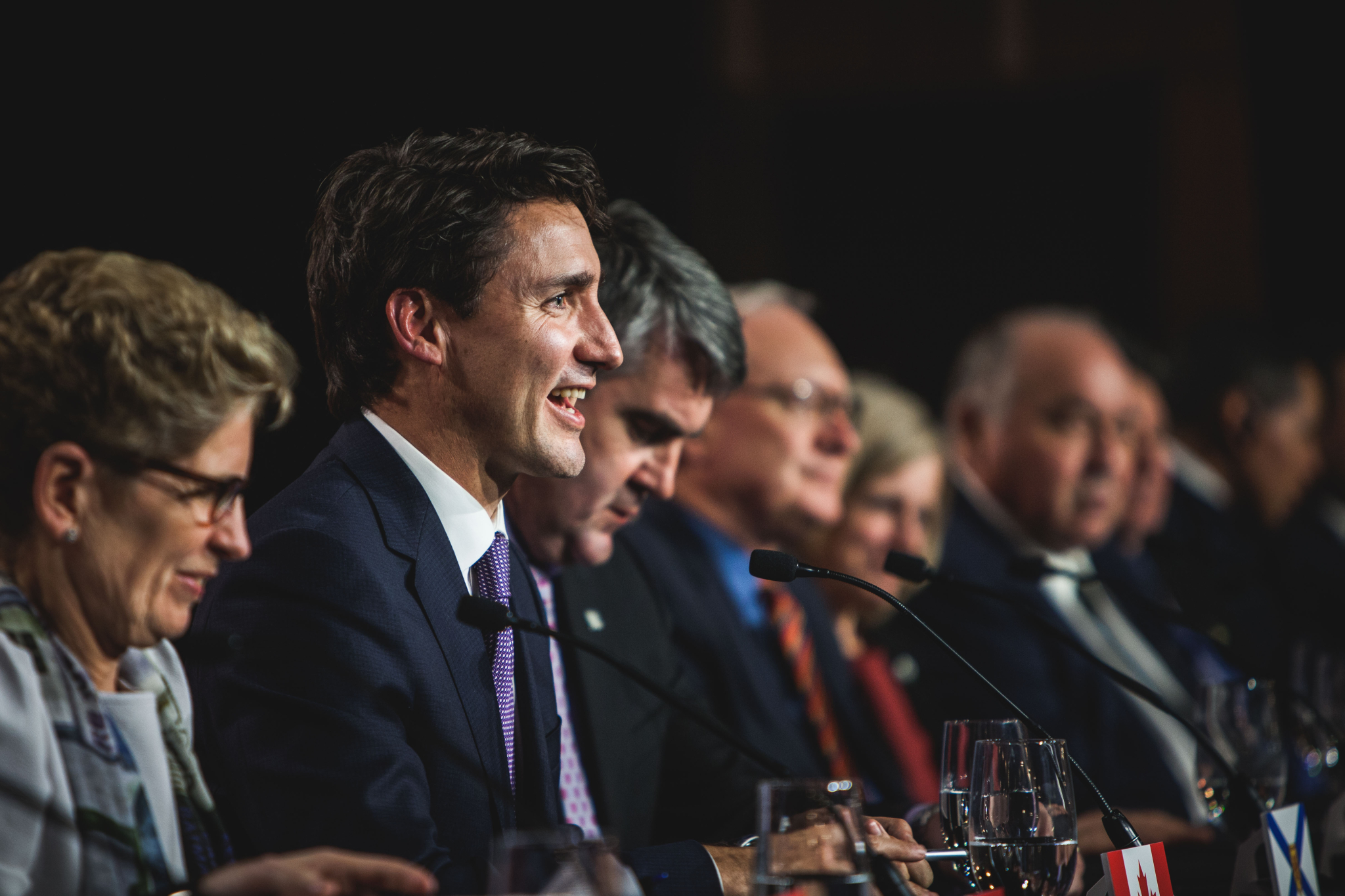 There were some celebrations after negotiations ended with a climate change deal covering 93 per cent of the population.

Environment Minister Catherine McKenna gave a big hug to Brian Topp, chief of staff to Alberta Premier Rachel Notley, when she walked into the back of the room where the announcement was about to be made official.

They were celebrating a new 52-page roadmap which will allow Canada to grow a cleaner economy that contributes less to climate change.

“I’m very proud to now work with a group of premiers and Indigenous leaders who recognize that we are all in this together and that the need to act now is not simply a moral imperative, it’s an economic necessity,” said Trudeau, sitting alongside the premiers at the end of their full day of discussions.

The deal struck in Ottawa does not promise to deliver fully on Canada's international promises. The statement released today notably says that the actions will "contribute" towards Canada's 2030 target for reducing climate pollution.

"The actions taken under the framework will contribute to meeting or exceeding Canada's 2030 climate change target of a 30 per cent reduction below 2005 greenhouse gas levels."

Only one premier was completely opposed to the climate plan, Saskatchewan’s right-leaning Brad Wall, while another, Manitoba’s Progressive Conservative Premier Brian Pallister, said he wanted to see more action on healthcare before fully endorsing the climate plan.

All in all, the new deal creates a national climate change strategy — including introducing new charges that Canadians will have to pay for carbon pollution — a price that gradually rises beginning in 2018.

“It’s only by working together that we can truly take on the challenge of climate change — sharing ideas, challenging each other and, ultimately, making tough decisions," Trudeau said. "That’s what we needed to do to grow a strong and clean economy."

The framework agreement is based on nearly a year of work between Trudeau’s government, the provinces, territories and First Nations leaders. Quebec Premier Philippe Couillard, facing a series of votes in the National Assembly, did not attend but endorsed the agreement ahead of an evening dinner between the leaders to discuss healthcare.

“With this framework, we are telling Canadians and the world that a clean environment and a strong economy go hand in hand,” said Trudeau.

"It's been a long time since we've had a federal government making a real effort to try and hit a climate target," she said. "Although it's a tough process, working through the federation, we saw them come to an agreement today that's got a lot of key elements in it. So we think this is a really big step."

Some other environmental organizations were less enthusiastic. Both Greenpeace and Stand described it as a step in the right direction but not enough.

B.C. Premier Christy Clark initially left the negotiations before they had concluded. She told reporters that she wasn’t satisfied with the deal and felt it would harm western Canada’s oil and gas producers. But her spokesman later said she agreed to sign on after changes were included for mechanisms to conduct independent reviews on how the plan was working.

Alberta's Notley accepted the deal and noted that her province was also going ahead with its own carbon levy that takes effect in less than a month, on Jan. 1, 2017.

Trudeau sparred with Saskatchewan’s Brad Wall at the closing news conference over the deal's plans to introduce a national price on carbon pollution. Wall has previously questioned the urgency of fighting climate change, often expresses his distaste for carbon pricing, and said it was the wrong time to move forward with climate policy.

The Saskatchewan premier's latest criticism covered a range of concerns, including the policies of president-elect Donald Trump as well as low global oil prices that have led to tens of thousands of job losses since 2014 in the oil-producing provinces of Alberta and Saskatchewan.

Trudeau quickly fired back at Wall’s criticism, noting that studies show carbon pricing to be effective and that Canadian climate change policies need to be made in Canada.

“It’s a great day for Canada,” Trudeau said, getting the last word before concluding the news conference.

Biden tells Trudeau he used to be eye candy, too

The Trudeau government policies on reducing carbon emissions seems to reflect policies presented by the Canada's Ecofiscal Commission in a July 2016 report "Comparing Stringency of Carbon Pricing Policies" across Canada. In their Executive Summary, the authors start by saying: "Carbon pricing is not automatically effective at reducing greenhouse gas (GHG) emissions. Effectiveness depends on "stringency", a measure of the policy's ability to drive emissions reductions. More stringent policy creates stronger incentives and leads to deeper emissions reductions over time...
Given the gap between projected GHG emissions under current policies and Canada's existing 2030 target, more stringent policy will clearly be required across the country...
Different paths can be taken to achieve a coordinated pan-Canadian policy. The provinces themselves, for example, could choose to align their respective policies. Alternatively, the federal government could define a minimum level of stringency, with provincial policies that meet or exceed that level being exempt from the federal policy. There are likely other options, but in any case, some metric of stringency is required to define equivalent policy...
When carbon prices are equalized across all provinces, the result is that low-cost emissions reductions (i.e. those that cost less than the carbon price) are realized across the country. In contrast, differential carbon prices result in higher-cost reductions being implemented in those jurisdictions with higher carbon prices, leading to higher abatement costs overall."
Despite all these relatively simple, comprehensible and practical policies, the main question remained: " To what extent are individual provinces and the federal government ready to contribute toward the overall national and international effort to reduce GHG emissions ?" Unfortunately, most government policies are usually decided based on political ground, not practical ground, and that meeting showed exactly that. Is there hope that the different level of governments can get their act together? I don't know, but I hope so, because if we don't act promptly at reducing GHG emissions in Canada and around the world, we will have to face more stringent urgencies, urgencies that won't be dictated by politicians but by nature itself.