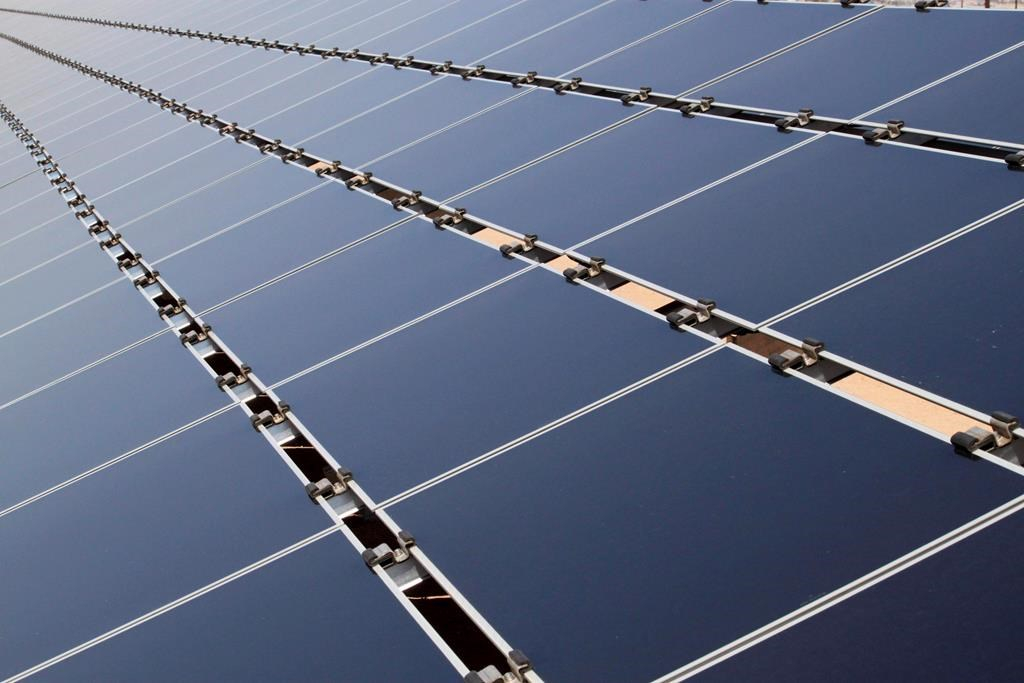 This April 20, 2011, file photo shows some of the 30,000 solar panels that made up a photovoltaic array in Albuquerque, U.S. Photo by The Canadian Press / Susan Montoya Bryan
Previous story
Next story

John Gorman, president of the Canadian Solar Industries Association, said Thursday that the shutting down of a rebate agency that had been funded by the cap and trade program will put a “chill” on a part of the province’s solar business.

“What we’re left with now is a big void, a big vacuum, and a lot of Ontarians who were literally on the waiting list to put solar on their rooftops,” said Gorman, in an interview with National Observer on June 21.

The provincial agency, called Green Ontario Fund or Green ON, offered rebates of up to thousands of dollars for solar installations as well as new insulation, replacement windows, heat pumps and smart thermostats. On Tuesday, Green ON’s website announced that it had closed all its rebate programs as well as other activity.

Ford's plans to scrap the outgoing government's climate change plan has also prompted speculation that the province is on the verge of eliminating incentives for consumers looking to buy an electric car.

Gorman said he didn’t know exactly how many people were on the waiting list for Green ON solar installations, but he said there was “no doubt in my mind that it was in the thousands.”

That’s because Ontario solar firms had been expecting to be on track to meet a target to install solar on about 30,000 new residential rooftops over the next three years, he said. The industry had already installed about that much and expected the trend to continue, powered in part by the rebate program.

Having solar at home helps Ontarians reduce their power costs, cut their power bills and help tackle climate change. Green ON was funded entirely by revenues from the price on pollution. The agency’s imminent shutdown now means the growth of residential solar installation is less certain.

“The decision to pull out of cap and trade is going to put a chill on certain segments of the market, in particular homeowners,” said Gorman. “That part is going to hurt a lot.”

Gorman was speaking from the Solar Canada conference in Calgary — which is being held outside of Ontario for the first time in its 20−plus−year history.

He said he expected commercial rooftop installations, and other solar products and services offered to commercial and industrial users, to continue to be strong in Ontario.

The province has installed roughly three gigawatts of solar over the last seven years, he said, arguing the industry has been built into a significant and diversified force, seeking out market niches as costs have plunged.

He also stressed that cap-and-trade revenues aren’t the only way to drive residential rooftop solar installations.

But solar industry participants at the conference told The Canadian Press they expect more investment to flow to Alberta and the United States in the wake of Ford’s vow to axe cap and trade.

Toronto−based SolarWall, which makes solar heating systems for buildings, was poised for "explosive growth" in Ontario but will now concentrate on finding contracts in the United States or Alberta, said Todd Marron, North American sales manager.

"All of that money in Ontario is going to Alberta right now. Or back to the safe haven of California," he said in an interview at his company’s exhibition area booth. "There was a ton of investment coming into Ontario."

The Ontario market for his company’s solar array mounting systems will slow down considerably because of the Ford government’s moves, said Peter Aulich, CEO of Toronto−based KB Racking.

"We have some hopes for the Alberta market right now but I see for the next year or two the Ontario market will be fairly slow in terms of new jobs," he said.

"I’m hopeful we can keep our staff just from the other projects we get from Alberta or the U.S."

He said many of KB Racking’s products are made with aluminum and steel, pointing out that the U.S. government’s tariffs on those metals have increased prices for his customers in both the U.S. and Canada.

Exhibitor Randy Fillmore, national sales manager for Ontario−based Fusetek, which imports and sells electric fuses, said he’s willing to give the Ford government a chance to prove that cancelling the previous government’s policies will create a more business−friendly environment that will allow everyone to prosper.

Ford’s move to abandon Ontario’s price on pollution is also generating market uncertainty in the energy sector, a report in the Financial Post suggests.

At least two of Canada’s largest energy giants, Calgary-based Suncor Energy and Enbridge, are unsure about what to do with the cap and trade credits that they have already purchased, the Post reported.

Under the program, businesses emitting large amounts of carbon pollution were expected to buy up enough credits to offset that pollution by 2020 — the date when the program stopped handing out free credits as a transition phase.

“Everyone’s scared. These guys want to have market certainty,” said Michael Berends, a managing director at cap-and-trade advisers ClearBlue Markets based in Toronto, according to the report.

In addition to energy players, at least one large Canadian financial institution — the Toronto-Dominion Bank — has also bought credits, the report confirmed.

Ontario had joined its carbon market with Quebec and California. Soon after Ford announced his intent to pull out, those two other jurisdictions quickly kicked Ontario out of the joint market themselves — in order to prevent firms from dumping credits and driving down prices.

Reporters asked Ford about the issue of what firms that already own credits should do, when he announced his move to abandon the price on pollution on June 15.

He replied that businesses “will be quite happy they don’t have to pay (for carbon credits) in the future,” but did not elaborate about what will happen to those credits.

He was also pressed about the possibility of lawsuits from angry investors who had been made to invest in the program that is now being abandoned.

He said the same thing: “the companies are going to be quite happy that they don’t have to pay for this."

On Tuesday, the Green Ontario Fund website said rebates would still be honoured if Ontarians had already signed work agreements for work to be finished by Aug. 31, and the rebate application paperwork is submitted by Sept. 30.

Ford’s camp said Thursday that he would be extending those deadlines to Oct. 31 and Nov. 30 respectively, according to the Toronto Star.

“In order to help small businesses and families, our intention is to extend the install date of the Green ON program to Oct. 31, 2018,” PC spokesperson Simon Jefferies is quoted as stating.

“They will have until Nov. 30 to submit any outstanding paperwork. No new applications will be accepted."