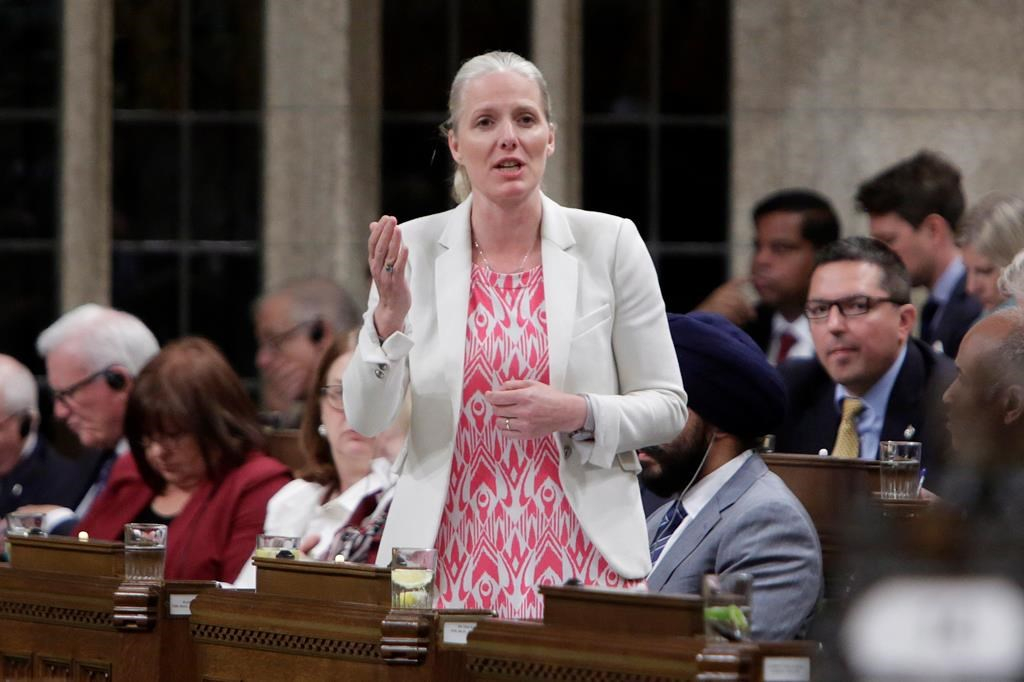 Minister of Environment and Climate Change Catherine McKenna speaks during question period in the House of Commons on Parliament Hill in Ottawa on Thursday, June 14, 2018. File photo by The Canadian Press/David Kawai
Previous story

McKenna is in Belgium this week for the second ministerial meeting of Canada, European Union and China on their climate change alliance to keep driving progress on the Paris agreement.

During the meeting, European Union energy commissioner Miguel Arias Canete called on the rest of the world to follow Europe's lead and aim to cut emissions even more than already planned.

"Our collective Paris goal to pursue efforts to limit global average temperature rise to 2 C and to limit this rise to well below 1.5 C, requires each of us to look for deeper cuts than are reflected in our current Paris targets," Canete said in his speech at the event.

Europe now believes it can cut overall emissions to 45 per cent below 1990 levels by 2030, up from the 40 per cent target originally set in 2014, by increasing its use of renewable energy sources and improving energy efficiency.

When it signed the Paris agreement in 2015, Canada set targets to cut emissions to 30 per cent below what they were in 2005 by 2030 and it isn't looking yet at setting those targets higher. Currently Canada is working on actually meeting the existing targets, with most analyses suggesting Canada would be at least 50 million tonnes shy of its goal by 2030 unless more work is done.

"We negotiated an ambitious climate plan and we're committed to implementing that plan," McKenna said from Belgium on Thursday. "That's quite frankly our focus right now."

While in Belgium, Canada did sign a "declaration of ambition" put forward by the Marshall Islands, declaring it will look at "exploring the possibilities for stepping up our own ambition." A spokeswoman for the minister later said ambition does not necessarily mean targets, but Marshall Islands President Hilda Heine seems to disagree.

"If we do not raise global ambition by 2020 it will be too late for my island nation," said Heine said in a news release about the declaration. "This means increasing the targets we set before we agreed to the Paris Agreement in 2015."

Heine wants the world to aim for zero net emissions by 2050.

The United Nations last fall also called on countries like Canada to increase their targets or the world will have no way to keep the world from warming up more than two degrees compared with pre-industrial levels. Beyond that point, scientists believe the extreme weather and flooding that will result will be difficult, if not impossible, to guard against.

McKenna said Canada is always looking at how it can be more ambitious, pointing to investments in clean technology and a challenge fund for government cash for green initiatives issued to businesses and other levels of government last year. She said with the United States pulling out of the Paris deal, Canada is stepping in as a global leader with China and Europe, despite its much smaller population and emissions.

"Canada is clearly punching above its weight on the climate file," McKenna said.

Dale Marshall, the national program manager for climate change and energy at Environmental Defence, said he doesn't think anybody else would agree with that.

He said Canada can increase ambition without increasing targets by improving accountability mechanisms in its climate plan or reducing its contribution to the world's fossil fuel supply by not building the Trans Mountain pipeline expansion.

But Europe already had more ambitious targets and plans and this week they enhanced them, while Canada isn't even on track to meet its less-ambitious target, he said.

"I think it's a bit much to claim that Canada is punching above its weight," Marshall said. "We may end up getting there, if the government was to actually implement all the policies in the (climate plan) with ambition and speed. We may get to that point but we're certainly not there now."

HOW TO FIGHT CLIMATE CHANGE: figure out who's to blame, and sue them