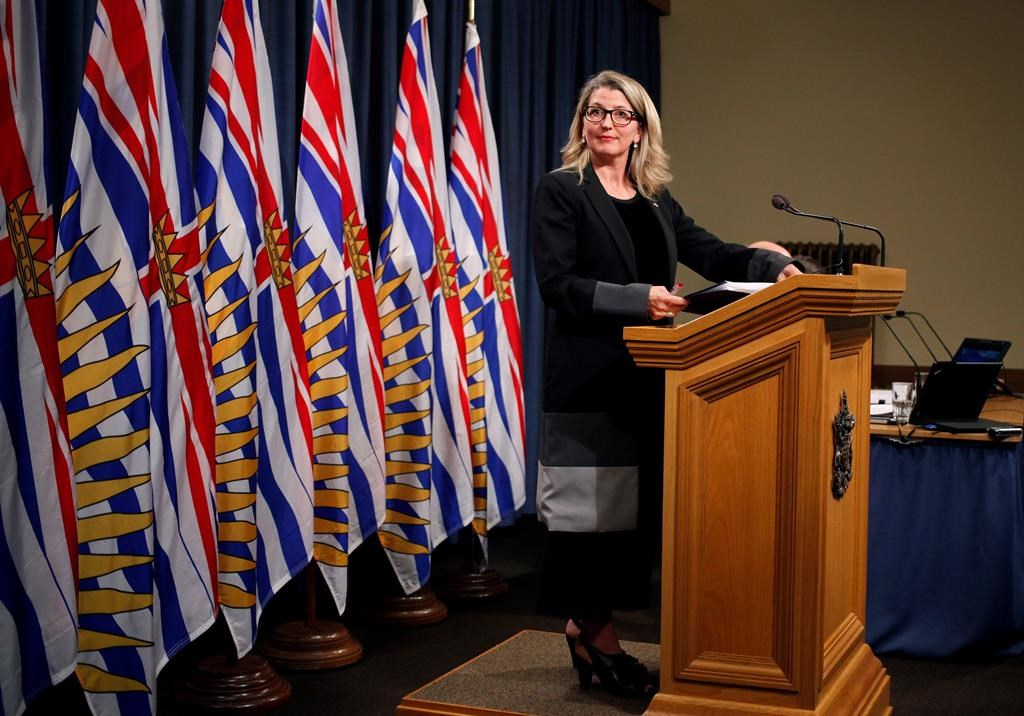 Minister of Agriculture Lana Popham provides an update about fish farms in the province during a press conference in the press gallery at the Legislature in Victoria, B.C., on Wednesday, June 20, 2018. Photo by The Canadian Press/Chad Hipolito
Previous story
Next story

Fish farmers in British Columbia have four years to show their open-net operations don't harm wild salmon and to get approval from First Nations to locate them in their territories as part of new rules introduced Wednesday.

"Fish farms are unique, with impacts that are very difficult to contain," Popham told a news conference. "We acknowledge that many factors are affecting wild salmon, and one of them is fish farms. Wild Salmon are critical to the culture and well-being of many B.C. First Nations."

Popham announced the new policies as tenures expired for 20 fish farms operating around the Broughton Archipelago off Vancouver Island.

Opponents to open-net pen fish farms in the Broughton Archipelago have conducted protests and occupations on some of the farms, which they say pose a threat to wild salmon stocks by spreading viruses, diseases and sea lice.

Popham said talks between Broughton-area First Nations and the government about the future of the tenures are ongoing though she wouldn't comment on their status. She said the tenures for those fish farms will now continue on a month-to-month basis until some form of agreement is reached.

A court ruling in 2009 clarified that the federal government had jurisdiction over regulating the farms, and B.C. will look to the Department of Fisheries and Oceans to determine under what conditions the farms can operate without threatening wild salmon, Popham said.

She said the four-year limit aligns with the 2022 renewal of licences for most of the fish farms currently operating in B.C.

"B.C. is very aware that thousands of jobs depend on maintaining healthy marine environments, along with the livelihoods and economic prosperity of coastal communities and First Nations," Popham said. "The challenges that face our wild salmon have been ignored for too long."

Chief Bob Chamberlin of the Kwikwasut'inuxw Haxwa'mis First Nation, who is part of the group of Indigenous nations negotiating the Broughton Archipelago tenures, said he's pleased the government has expressed its commitment to protect and rehabilitate wild salmon populations.

He said he's also enthused salmon farm operators must demonstrate they have reached agreements with First Nations to locate in their territory.

But the 2022 deadline is too far away, Chamberlin said, adding the First Nations in the Broughton Archipelago area have been negotiating with the B.C. government since January on how to address the expired fish farm tenures.

"We just have to dot one more I and debate a comma and then we'll be ready to sign this process document," said Chamberlin. "But the opinion I express on behalf of our First Nation and the group at the table is 2022 is too long."

B.C. Salmon Farmers Association spokesman Shawn Hall said the government has introduced significant changes to rules overseeing the approval process for fish farms and the industry will rely on the relationships it has built with First Nations.

The BC Liberals said the government's new tenure policy sends the wrong message about economic stability in the province.

Resource opportunities critic Ellis Ross said in a statement the government has ignored the thousands of Indigenous people employed in the fish-farm industry.