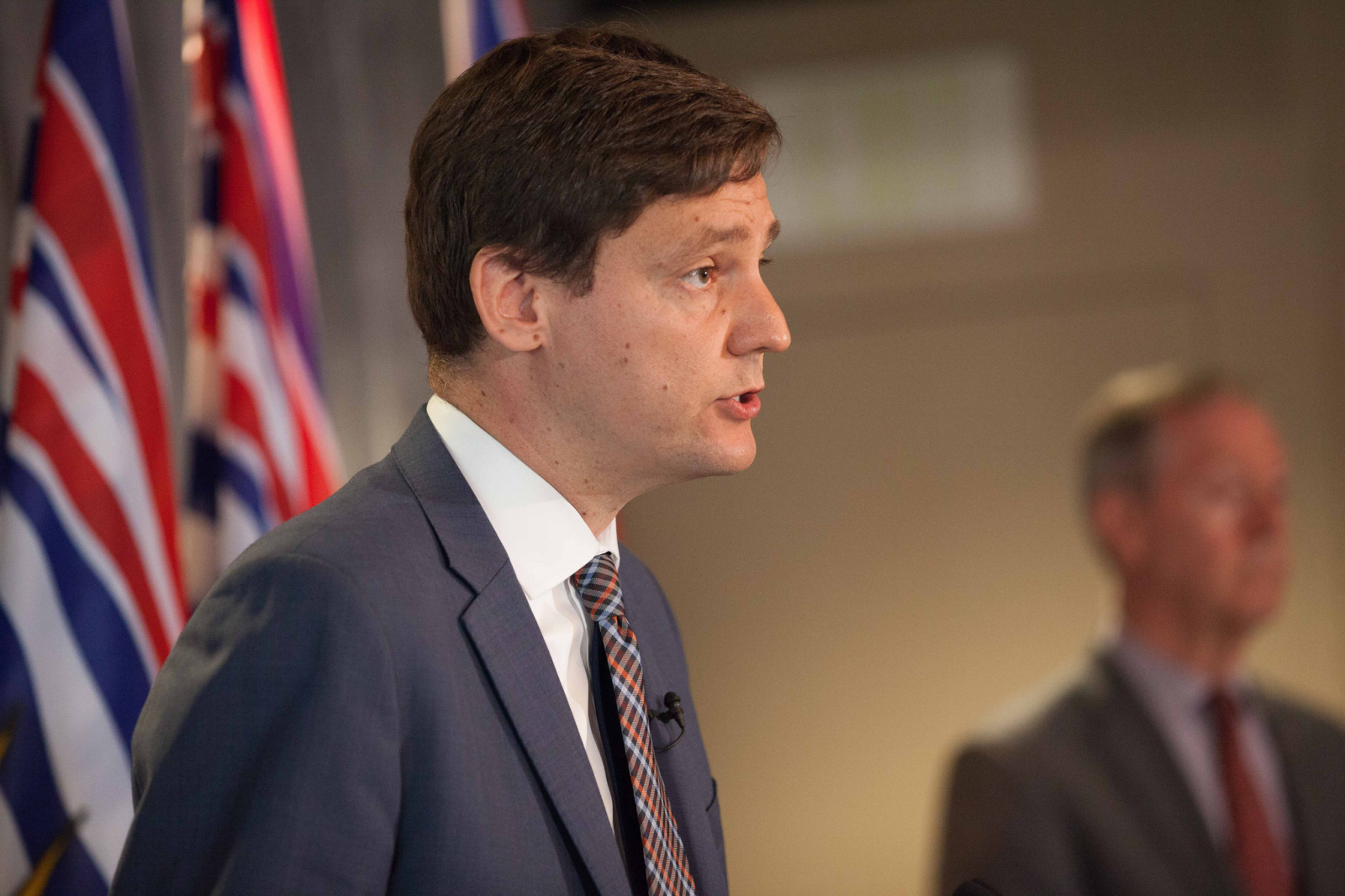 At least $100 million in dirty money – and probably much more – was laundered in B.C. casinos over the past 15 years, fueling both the opioid crisis and sky high housing prices, a new report has found.

Dr. Peter German’s report — Dirty Money — outlines what the province needs to do to clean up this mess and Attorney General David Eby says he’s on it.

“The era of inaction and denial is over. We are moving immediately to get dirty money out of B.C. casinos," Eby said. “It will take time to undo the damage done to B.C.'s international reputation, but we aren't waiting to get started.”

Eby tasked German, who is a former RCMP officer, a lawyer and the author of a textbook on money laundering, with investigating money laundering in the province and has agreed to implement all 48 of German’s recommendations.

“We will be moving as quickly as possible to slam the door shut on dirty money in B.C. casinos and cut off funding for organized crime in our province,” Eby said at a news conference.

But while the casinos are being reformed and regulated, organized crime may very well move its cash to another industry, German said.

“It’s like whack-a-mole,” German said. “You deal with casinos and then where are they going?”

Likely suspects are any sector of the economy where you can pay with cash, such as luxury goods, automobiles, boats and horse racing, German said.

“Vancouver has been described as the number on super car city in North America,” German writes. “Furthermore, dealers in Greater Vancouver are among the highest volume new and used luxury car dealers in Canada.”

Companies that handle cash, like casinos, but also like travel agencies, foreign exchange dealers, bars and restaurants are also vulnerable, as is the entire real estate industry. Vancouver real estate is globally renowned for its lack of affordability, but German notes it is also estimated to provide about one-third of the province’s entire GDP.

“It has been suggested that you can ‘see a rat move through all of it,’ meaning each component is of the (real estate) industry is vulnerable to criminal actors who tend to operate in more than one discrete area of real estate sales, mortgages, insurance and so forth,” German writes.

“The era of inaction and denial is over. We are moving immediately to get dirty money out of B.C. casinos," Eby said. “It will take time to undo the damage done to B.C.'s international reputation, but we aren't waiting to get started.”

Lawyers, accountants and company formation agents are all vulnerable to being unwitting agents of money laundering, German writes, noting that neither mortgage brokers nor lawyers have to report transactions to FinTRAC, an organization that detects money laundering and the financing of terrorism.

A second phase of the investigation will look closely at the real estate industry, which has been linked with money laundering, Eby said.

What will the economic impact of the crackdown be?

The government has projected a $30-million reduction in gambling revenues for this year, in anticipation of the crack down on money laundering. The Attorney General's Ministry says it does not know what the overall, ultimate fiscal impact to B.C.’s economy will be.

Casino gambling revenue is the largest source of revenue for the provincial government, outside of taxes, German writes in the report. The government uses this money to fund social welfare, education and health and it has become critical to balancing the books.

“The gaming industry is incredibly important to all British Columbians as it accounts for approximately $1 billion in revenue to the province annually that is designated for social services of various kinds,” German said at the news conference.

So how does the money laundering work?

The Vancouver Model, as German describes it, involves Chinese citizens who want to get their money out of China and into Canada. They first borrow money in Canada, then send it to an underground banker in China. The origin of the money in Canada is unclear, but often it is stacks of $20 bills, German writes. Someone will take the cash to a casino, gamble and then leave with either larger bills or a cheque.

Professor John Langdale of Macquarrie University in Australia was the first to use the term “Vancouver Model.” His research shows that “Vancouver is a hub for Chinese-based organized crime,” German writes.

“A complex network of criminal alliances has coalesced with underground banks at its centre. Money is laundered from Vancouver, into and out of China and to other locations, including Mexico and Colombia,” German writes.

Although German notes the large-scale money laundering was transnational, he says it’s not an Asian problem.

“It’s about those who purchase illegal drugs, counterfeit products, and stolen property, as well as those who operate in the underground economy and subvert tax laws,” German wrote in the report. “It’s our problem, not China’s problem.”

The 48 recommendations are largely regulatory and administrative, but they do include the formation of a specialized gaming police force that operates 24 hours a day, seven days a week.

In 2004, an RCMP Integrated Illegal Gaming Enforcement Team (IIGET) was created, but by 2009, it was disbanded, because the government did not think it was getting value for money, German writes. In 2015, a Joint Integrated Gaming Investigation Team (JIGIT) was formed between the RCMP and the GPEB.

A suspicion of money laundering was reported by casino staff as early as 2011 and the Liberal government commissioned a report by MNP LLP in 2015, who confirmed what was happening at the River Rock Casino in 2016. The report was not released to the public by the former Liberal government, however the NDP government released it in 2017.

The epicenter of the activity was the River Rock Casino Resort in Richmond, but no large casino was untouched, German said.

There is no way to know exactly how much dirty money was laundered in B.C. casinos.

“We can only guess at the true amount … but the total well exceeds $100 million,” German said.

An investigation in 2015 showed that, in just one month, $13.5 million in $20 bills was accepted at River Rock Casino.

In September 2010, a person arrived at the Starlight Casino in New Westminster with $3.1 million, including $2.6 million in $20 bills bundled with elastics and carried in plastic bags. When the Gaming Policy Enforcement Branch reported that to the B.C. Lottery Corporation, BCLC said the person’s buy-in pattern didn’t indicate money laundering, German writes.

Another example is from 2012: a man went to the River Rock Casino in Richmond with $100,000 in $20 bills. He gambled $3,000 and cashed out the remainder in $100 bills. The next day, he returned with another $100,000 in $20 bills. An investigator told the casino to refund his $20s, but “a casino official told [him] not to interfere or direct his staff.” In the end the $20s were returned to the man, who later “admitted collecting cash outside a local mall from an ‘unknown’ source that he telephoned.”

At Wednesday’s news conference, reporters were shown videos of people arriving at the casino with plastic bags full of $20 bills, which were accepted and counted by casino staff. One video shows the staff counting $20 bills for a full 13 minutes.

In 2014, more than $118 million in Suspicious Currency Transactions (SCTs) was reported in B.C. casinos, with 76 per cent of that being in $20 bills, German writes.

Calling it a “system failure,” German said the problem grew over time.

“The combined effect of years of denial, alternate hypotheses and acrimony between entities made for a perfect storm which reached its apex in July of 2015,” German said.

The report does not find fault with anyone in particular and Eby says that was a conscious decision. If he had opted for a fault-finding investigation, it would have taken years to complete and been very expensive, he said. But on the other hand, it would have had greater accountability.

In a foreboding section of the report, German quotes interviews with senior Vancouver Police Department executives who told him we have not “scratched the surface” of the money laundering that occurs in the Lower Mainland and that the casino money laundering represents “a drop in the bucket.”

Drawing on examples from Ontario and Nevada, German recommends that the casino industry transition to a standards-based model, developed jointly by industry and government, with a new independent regulator in charge.

While the hit to the economy could prove to be a bitter pill, allowing this dirty business to continue would be far worse. Money laundering is far from a victimless crime, and if it’s linked with our province’s mounting death toll from the tragic opioid crisis and the serious dysfunction of our housing costs, it needs to end today.

Tracy Sherlock writes about B.C. politics for the National Observer. Reach her at [email protected].

A Matter of Confidence gives insiders an intimate look into B.C. politics

Can the drug deaths be traced

Can the drug deaths be traced to the BC Liberal oversights? By the way, where is Rich Coleman? Reporters have been trying to reach him all day. Jas Johal filled in but he offered more Liberal smoke and mirrors. That's why they're done in B.C.

Is Rich Coleman really going to run for mayor of Surrey? I sure hope so because then he will have to show up and answer questions about this story. But then again, maybe he'll take a page from Doug Ford's playbook - don't bother campaigning. Just let the chips fall where they may.