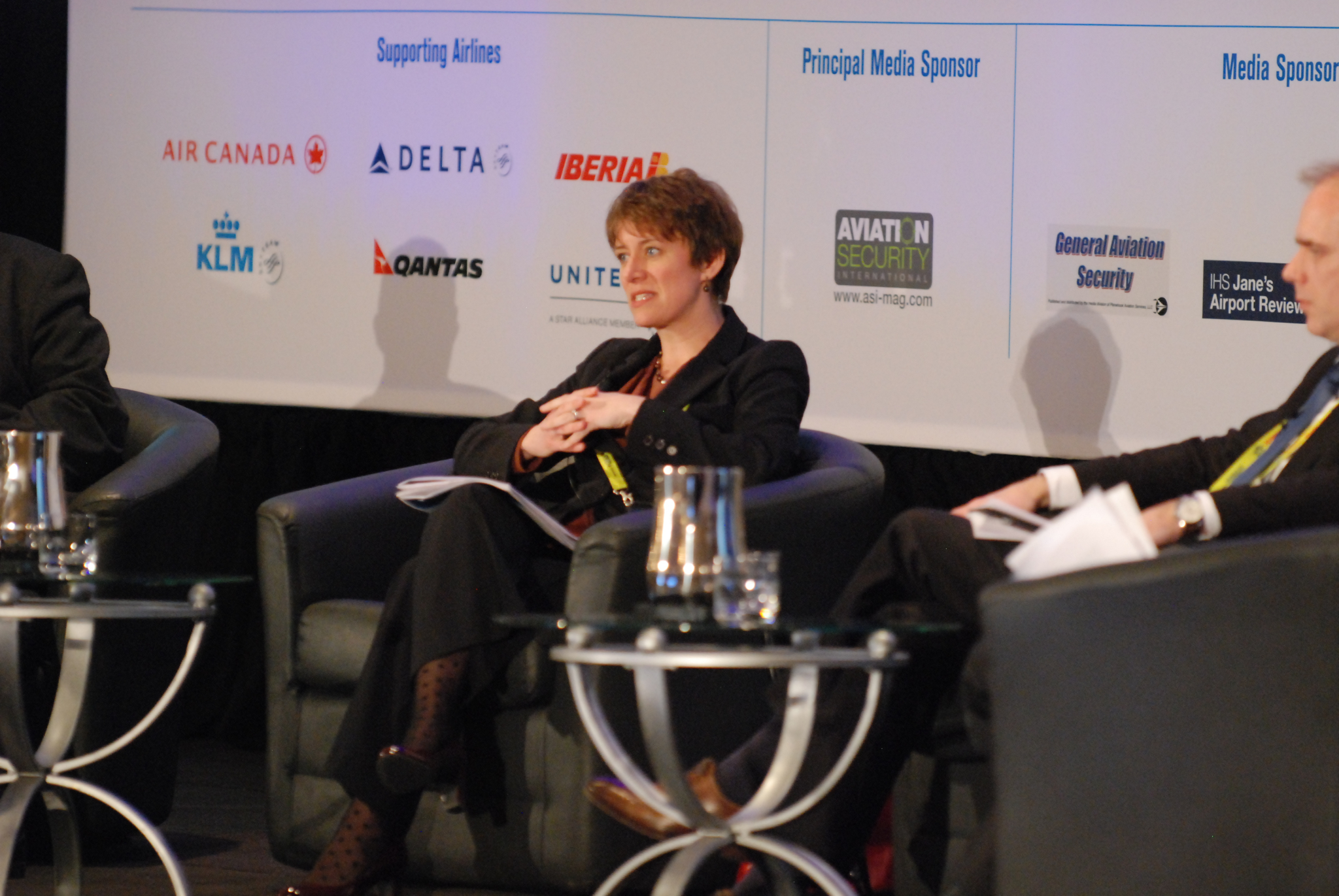 Erin O'Gorman, at the time a director at Transport Canada, speaks during a panel discussion hosted by the International Air Transport Association on March 5, 2013 in Brooklyn, N.Y. Photo courtesy of IATA
Previous story
Next story

Prime Minister Justin Trudeau has announced the promotion of a high-ranking public servant who played a key role in the federal government's 2016 consultations with First Nations and its approval of the troubled Trans Mountain pipeline expansion project.

The move has prompted one opposition MP to describe Trudeau's actions as "irresponsible" due to a cloud of controversy hanging over the pipeline, soon to be owned by taxpayers after Texas energy company Kinder Morgan bailed on the project and sold it to the federal government for $4.5 billion.

Erin O'Gorman served as an associate deputy minister of the government's Major Projects Management Office, during the federal review of the expansion, which aims to triple Kinder Morgan's crude oil shipping capacity from Alberta to the B.C. coast. The Major Projects Management Office was set up by the former Harper government in 2007 to speed up the federal review of major industrial projects and make them more efficient.

Government urged to turn over documents

Soon after Trans Mountain was approved in November 2016, several senior officials involved in the process moved to new positions in government, including O'Gorman, who transferred to the federal Treasury Board as an assistant secretary of government operations.

The pipeline review, under O'Gorman's supervision, has been soundly criticized by Kinder Morgan opponents who have alleged that the process was "rigged" to approve the project without an adequate assessment of its impacts. Concerns about this process have driven fierce opposition in British Columbia, prompting Kinder Morgan to withdraw from the project and sell its interests to the federal government in the $4.5-billion deal announced on May 29.

Two Kinder Morgan executives in Canada, Ian Anderson and David Safari, were each offered $1.5-million bonuses under that deal, if they remain in their positions over the next two years.

Trudeau announced Wednesday in a statement that O'Gorman would be promoted to the position of associate secretary of the Treasury Board, effective on July 9.

O'Gorman has had a long career in the public service, working in several senior positions since 2003. These include a stint as a director responsible for aviation security at Transport Canada from 2011 to 2015, as well as serving as a top aide to former prime minister Stephen Harper's national security adviser from 2006 to 2007. She was also a director of operations at the Privy Council Office, the central department in the public service, from 2007 to 2010.

She was most recently in the news this year however, following an investigation by National Observer that revealed she had instructed public servants in 2016 to find a "legally sound" way to approve the Trans Mountain project, at least one month before the government had concluded its formal consultations with affected Indigenous nations.

Several First Nations have challenged the government's approval of the project at the Federal Court of Appeal, arguing that the consultations violated their rights since they were not meaningful, as required by the Canadian Constitution.

“It’s irresponsible for the prime minister to promote someone who is under suspicion of helping to rig the review of Kinder Morgan's Trans Mountain pipeline expansion project," said NDP environment critic and Montreal-area MP Alexandre Boulerice in an email to National Observer, after being asked to comment on the promotion.

"And I seriously hope this is not some sort of reward for allegedly helping the government override consultations with First Nations. The government has not responded to our request to turn over relevant documents that could dismiss these serious allegations.”

In the wake of National Observer's revelations about the pipeline approval process, NDP MP Richard Cannings attempted to introduce a motion last spring to get O'Gorman to explain her actions before parliamentary hearings. But this proposal disappeared after the Liberal-dominated House of Commons natural resources committee secretly decided to kill the motion, which was raised on April 26 by Cannings, who represents the B.C. riding of South Okanagan-West Kootenay in Parliament.

NDP Leader Jagmeet Singh also wrote a letter to Trudeau asking him to release all of the secret records about the federal Trans Mountain review, but so far the government has declined. The federal government has also successfully fought off a legal motion at the Federal Court of Appeal, spearheaded by the Tsleil-Waututh Nation in B.C., that aimed to force it to release these files. That motion was dismissed by the court in a May 31 ruling.

An NDP spokeswoman said the party is not allowed to talk about what happened during the debate over Cannings motion due to parliamentary rules that require secrecy over off-the-record discussions in committees.

National Observer was unable to reach James Maloney, the Liberal MP for Etobicoke-Lakeshore who chairs the committee in question, for comment.

“Deputy ministers are professional, non-partisan public servants,” said PCO spokesman Stéphane Shank, in an email. “They are chosen by the prime minister on the advice of the clerk of the Privy Council and are appointed by the Governor in Council. Their role is to provide their minister with the broadest possible expert advice and support needed for the minister’s portfolio responsibilities, and to undertake the day-to-day management of the department on behalf of their minister.”

Tankers/pipelines don’t fail ,people fail …due to fatigue/stress. lack of training, deferred maintenance ,etc.
Society (investors/public) must rely on statistical risk assessments to determine the probable life of infrastructure .The NEB recommended approval of TMX without any independent science to help protect communities most likely to be impacted when that inevitable tanker spill occurs .While the TMX risk assessment suggested 1000+ year incident cycle…this does not prevent the spill from happening TOMORROW !
Why didn’t the government science/engineer community demand that their employer(Canadian public/government) not proceed …until they offered independent risk assessment counsel. The engineers' code of ethics demands such behavior…engineers must “ Be aware of, and ensure that clients(the public) and employers (Government)are made aware of, societal and environmental consequences of actions or projects and endeavor to interpret engineering issues to the public in an objective and truthful manner.

Perhaps this could be made

Perhaps this could be made available to the public through letters to the editor, if surviving local newspapers are "willing" to endanger relations with chambers of commerce, car dealerships, etc.

The National Observer is certainly working to expose the cover-ups of the Liberal/ Bay Street dependenc and their supporting "Merchants of Doubt," about the increasingly obvious threats to life on Earth.

The good news is she won't be

The good news is she won't be supervising the new review when it happens. National Observer needs to shadow whoever it is chosen to fill her expensive and compliant shoes.