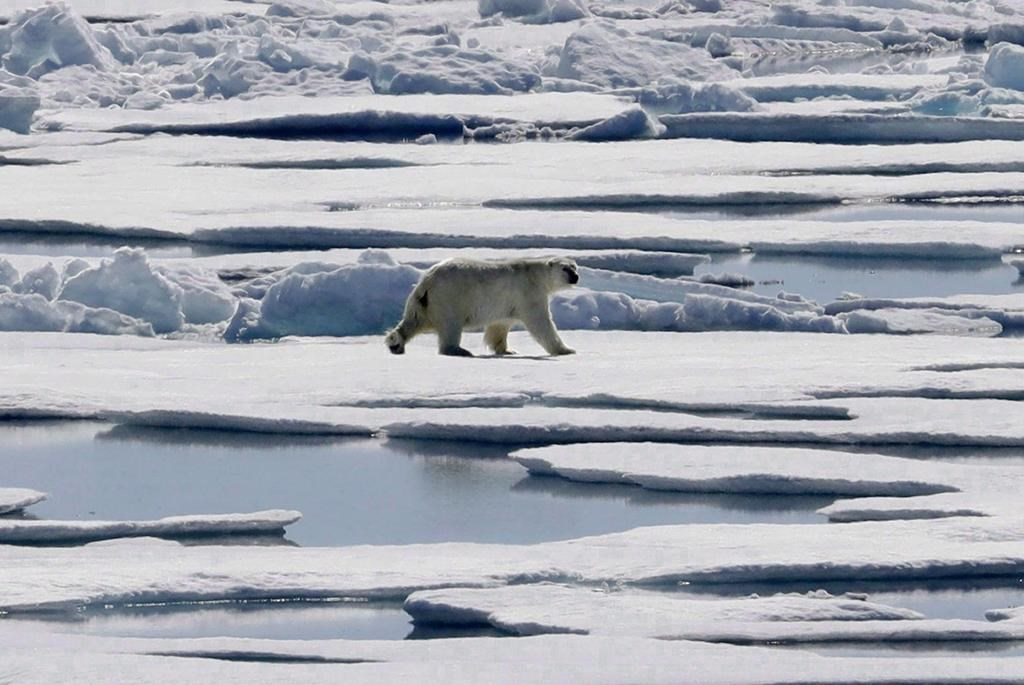 In this July 21, 2017 file photo a polar bear walks over sea ice floating in the Victoria Strait in the Canadian Arctic Archipelago. File photo by The Associated Press/David Goldman
Previous story
Next story

Increased shipping could make parts of the Northwest Passage among the most dangerous places in the Arctic for the whales and other mammals that live there, a study suggests.

In a paper published Monday, Donna Hauser of the University of Alaska warns that Lancaster Sound at the eastern gate of the passage could become a choke point for ships and marine mammals.

"That is one area that has the potential for high conflict," she said. "It's an obligatory pathway for both vessels that are going in and out of the passage as well as marine mammals that are migratory."

Hauser and her co-authors looked at 80 different populations of narwhals, belugas, bowhead whales, seals, walrus and polar bears across the North and attempted to gauge how vulnerable they would be to large ships.

Transits of both the Northwest Passage and the Russian Northern Sea Route are expected to increase as climate change melts the sea ice.

Hauser's study examined how the animals' habitat could intersect with probable sea routes in the month of September when ice is at its lowest and shipping would be busiest. It then weighed what would be the likely impacts of increased shipping on mammals.

The study concluded that just over half the populations would be exposed to shipping. It also found that animals in Lancaster Sound, along with a portion of Russia's central Arctic coast, were the most vulnerable.

Polar bears and seals face little risk, the study said. But whales — especially narwhal — would be the most vulnerable to harm.

Hauser said ship traffic could disrupt the behaviour of whales and affect their communication. Ships could also collide with them.

"There's been a lot of research to suggest that vessels may have impacts on marine mammals," she said.

Ships cause whales to change their swimming speed or dive rate. They can drive them away or cause them to freeze in place. If ship traffic increased in Lancaster Sound, whales would have to cope with those changes while already dealing with climate change.

Tens of thousands of bowhead, beluga and narwhal migrate through the area and depend on it for food. All the studied mammals are also important food sources for Inuit people who regularly hunt in the region.

Shipping through the passage is still relatively rare. But as sea ice extent falls by roughly 13 per cent each decade, that's expected to change.

Hauser said her research suggests now is the time to start thinking about the issue.

"There's going to be a lot of policy work to decide what are the risks and benefits of certain routing."

Techniques developed in southern waters to minimize conflict could be adapted to the North, the paper suggests. Careful design of shipping lanes, minimizing noise coming from ships and timing transits to avoid peak migrations could all help.

Hauser said it's tough to estimate when shipping might start to become a real problem for the mammals in Lancaster Sound. Too much depends on social and economic factors to have a firm timeline.

But it's coming, she said.

"We're at this precipice where vessels are poised to expand into these regions. The idea behind this study is provide a comprehensive assessment to help plan for the future."