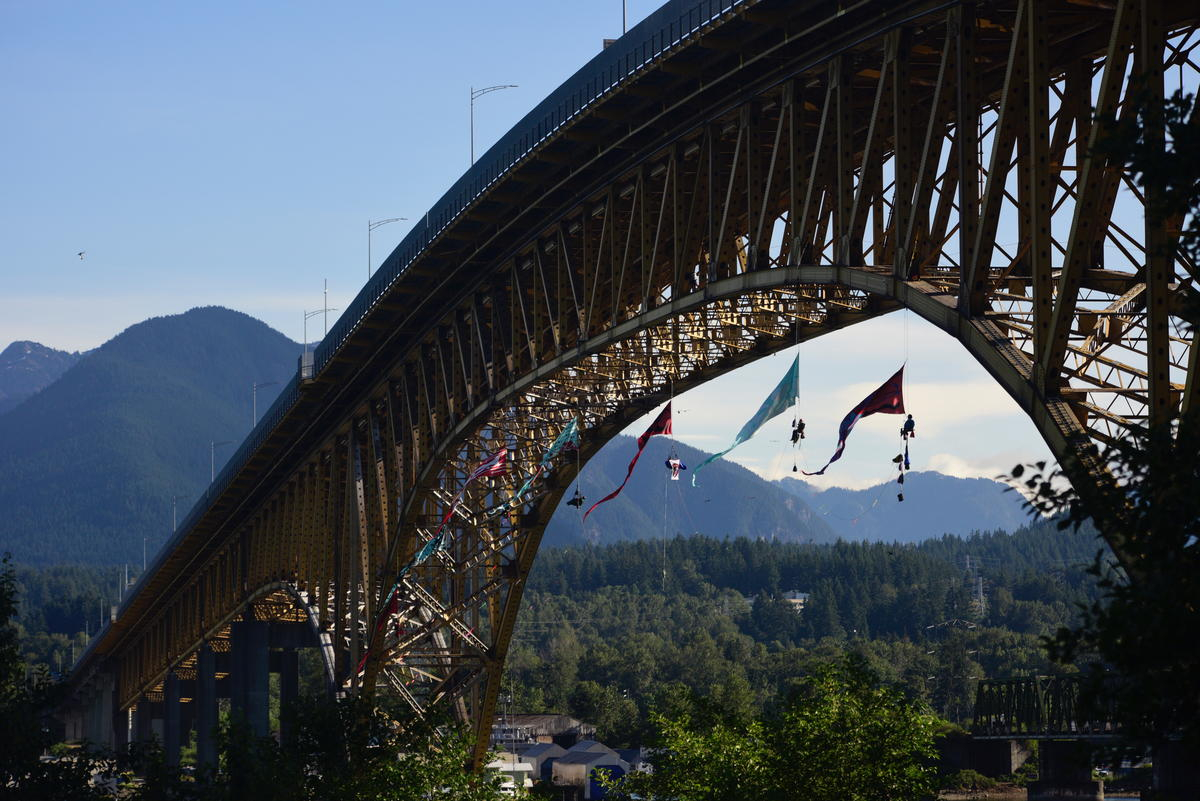 Activists launched an aerial bridge blockade in the path of a Trans Mountain oil tanker at the Ironworkers Memorial Bridge in Vancouver, British Columbia on July 3, 2018. (Photo: Greenpeace)
Previous story

As green groups and Indigenous leaders continue to raise alarm about the ecological and economic threats of the Trans Mountain pipeline expansion project—which Canadian Prime Minister Justin Trudeau recently announced the government is taking over after protests led Kinder Morgan to halt construction—12 activists on Tuesday launched an aerial blockade at the Ironworkers Memorial Bridge in Vancouver to stop an oil tanker from leaving the pipeline's terminal.

Opponents of the expansion project are especially concerned that, if completed, it would trigger a nearly seven-fold increase in the number of tar sands tankers that depart from the company's terminal in Burnaby, British Columbia, increasing the risk of a major oil spill and degrading marine conditions along the "tanker superhighway."

Greenpeace Canada's Mary Lovell, a climber from Seattle, Washington, said in a statement: "We urgently need to protect water because this tanker superhighway threatens the entire coast down to California. We are taking action today to defend water, health, and the climate—and we aren't alone. Hundreds of thousands of people from around the world are standing with us."

"I will remain the fierce opposition. It is in my blood to protect the water," declared Will George, one of the climbers and the leader of Kwekwecnewtxw. "Our Indigenous rights are being completely ignored, the safety of our water is being ignored, and most of all, my son's future is at stake. I will do whatever it takes to protect the water and my family and your family.

Greenpeace Canada's Mike Hudema, another climber based in Vancouver, specifically called out Trudeau for ignoring the widespread protests and attempting to save the pipeline project. "Trudeau is standing on the wrong side of history. Climate leaders don't choose to buy pipelines," he said. "World leaders cannot be allowed to approve projects that violate the rights of Indigenous peoples."

Hudema tweeted his view from the bridge, adding, "It's always a good day to protect the things you love."

This article was originally published in Common Dreams on July 3, 2018.

Huge thank you to these brave

Huge thank you to these brave water protectors! Millions have your backs. This pipeline will never be built.

The Ironworkers' Memorial Second Narrows Bridge itself and the rail bridge next to it are particularly vulnerable to collapse should a vessel hit them.
https://vancouversun.com/news/local-news/province-looks-at-ability-of-bu...
With an average 20-minute tide window to get oil tankers under them and the First Narrows bridge, with all other inlet traffic cleared of the shipping lane, what could go wrong? The rail bridge has collapsed before, and the resulting chaos and costs were contained. If the Second Narrows Bridge is lost, it will cost a few $-billion, with traffic and business in the whole Lower Mainland suffering for the couple of years required to rebuild.

Three cheers for their

Three cheers for their demonstrative courage and conviction. So too are their other heros....https://canadianviews-ymo.ca/meet-dimitri-lascaris-incisive-journalist-a...