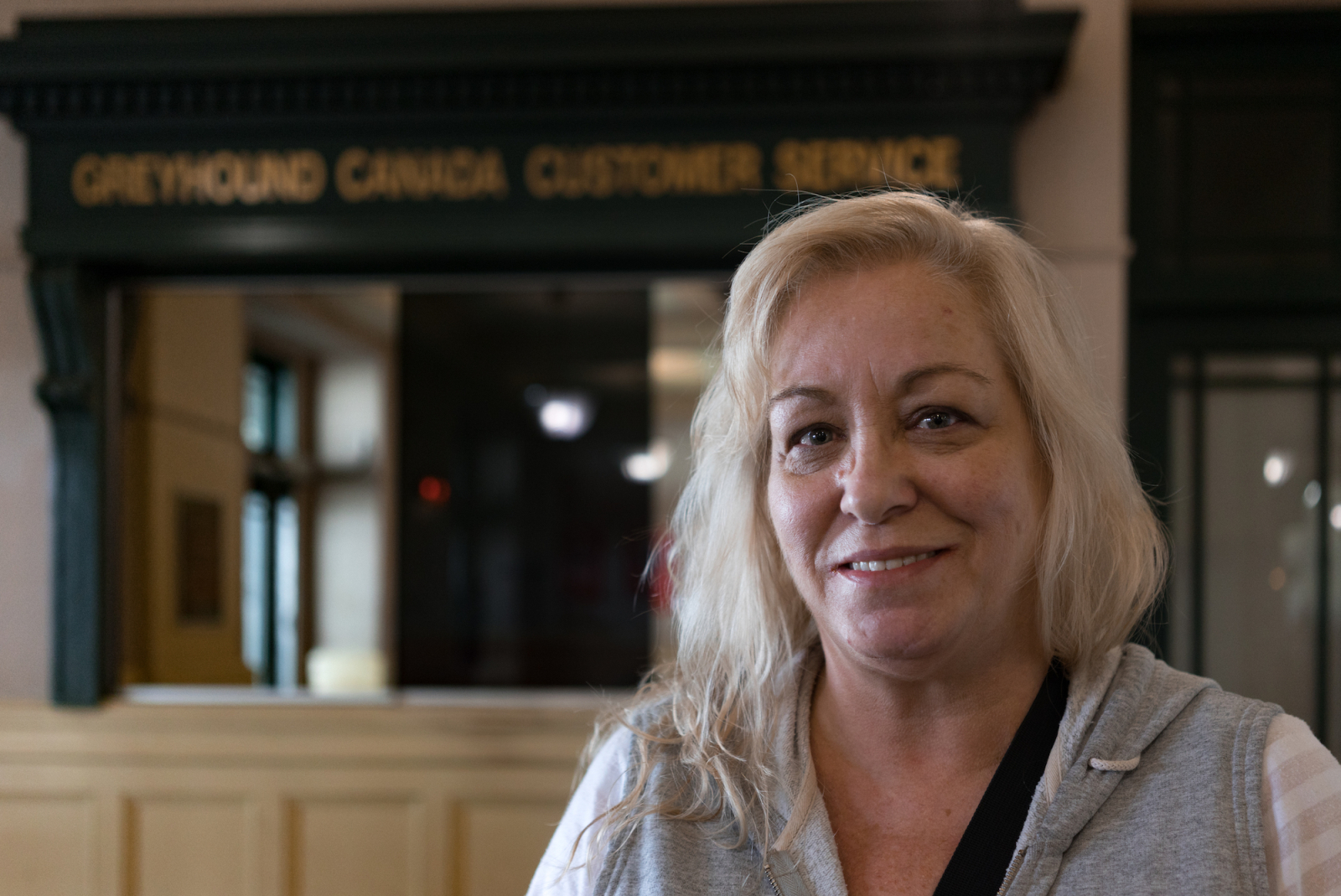 Cori Lofstrom waits for a Greyhound bus on July 10, 2018. She fears that she'll only be able to connect with her grandchildren by Facebook once Greyhound discontinues service. Photo by Michael Ruffolo
Previous story
Next story

Cori Lofstrom had been waiting for four hours at Pacific Central Station in Vancouver, as she considered how her life was about to change.

Lofstrom is a grandmother of 10 who lives in Nanaimo on Vancouver Island. From the Vancouver station, she was about to hop on a Greyhound to visit her niece in Merritt, in the south-central interior of the province.

She takes the coach service roughly four times a year to visit her family on the mainland. But on this day, she was learning that intercity bus company, Greyhound Canada, had just announced that they would be ceasing nearly all operating lines west of Ontario after October 31.

“I won’t be able to go anywhere,” Lofstrom stated in response to the news.

Greyhound has said it is maintaining one route linking Vancouver and Seattle. But once the other routes cease to operate, Lofstrom said that the only way she'd be able to keep in touch with her family would be through Facebook.

As far as travelling for leisure, Lofstrom joked that “the only thing I can do for an excursion is walk on the ferry, get off on [the mainland], go for lunch or something right there, go back on the ferry and go home.”

Alternative methods of transportation aren’t in the cards for Lofstrom, either. Her car just broke down, and with B.C. gas prices being the highest in Canada, she doesn’t believe that she’ll be driving anywhere anytime soon.

“[And] a plane would be real nice. But chances are it’s an expensive cab ride to get where you’re going from the airport. If there’s no bus service, you have to try and find somebody because a cab is an arm and a leg. And then it costs so much to go in the air.”

Exacerbating the epidemic of missing and murdered Indigenous women and girls

Lofstrom isn't the only one who's concerned about what the service disruptions will mean.

The Native Women's Association of Canada, an organization that promotes the well-being of First Nations, Métis and Inuit women, urged the federal government to intervene, noting that lives depended on safe, affordable and reliable transportation was an essential service.

“It is already well documented that our citizens have to ride the bus for hours, some longer than 14 hours, in order to see a doctor. How will they get access to adequate health care now?" - Grand Chief Arlen Dumas on Greyhound discontinuing service.

"The lack of safe transportation in and out of communities creates more vulnerability for Indigenous women, girls and gender-diverse people by encouraging travellers to resort to less safe means of transportation such as hitchhiking or walking unsafe highways," the association said in a statement posted on its website. "By virtue of this significant access barrier, it will exacerbate the epidemic of missing and murdered Indigenous women and girls."

The federal Department of Indigenous Services told CBC on Tuesday that it was aware the decision would have an impact on First Nations people and would work with other departments, provincial governments, Indigenous people and other stakeholders to find solutions related to medical transportation needs.

But Transport Canada told National Observer in a statement that it was not the federal government's role to intervene with subsidies for Greyhound or other private intercity bus companies. Instead the federal department pointed the finger at the provinces.

“Intercity bus services within Canada, such as Greyhound, operate on a commercial basis with no support from the federal government. There are no federal government funding programs that would provide an operational subsidy for private intercity bus carriers, as there has not been a requirement for such programs,” said Pierre Manoni, a senior communications advisor at Transport Canada, in an email.

"As the economic regulation of interprovincial bus carriers in federal jurisdiction has been delegated to the provinces and territories, under the federal Motor Vehicle Transport Act, the federal government has not taken an active role in supporting service provision."

The federal New Democrats said it's time for the government to change its approach.

“The NDP is calling on the federal government to intervene and ensure that these bus routes remain open. If those bus routes are shut down, then thousands of Canadians will lose their primary method of transportation to their work, medical appointments, and family visits,” said NDP transport critic Robert Aubin, who represents the Quebec riding of Trois-Rivières in Parliament.

In an interview with The Canadian Press, Greyhound Canada senior vice-president Stuart Kendrick stated that the closure is likely to impact roughly two million consumers, and place 415 people out of work.

Greyhound blames increased car travel and the introduction of new ultra-low-cost airlines as part of the reason for the cutbacks.

According to Kendrick, “despite best efforts over several years, ridership has dropped nearly 41 per cent across the country since 2010 within a changing and increasingly challenging transportation environment. Simply put, we can no longer operate unsustainable routes.”

These “unsustainable routes” include rural and small communities, as well as major cities like Vancouver, Edmonton, and Calgary.

The announcement by Greyhound came as a shock to many. British Columbia Minister of Transportation and Infrastructure Claire Trevena stated that “it’s unfortunate that Greyhound did not communicate their plans sooner. At no point did Greyhound reach out to me, or my staff, to have a conversation on solutions to keep people connected — something I would have expected, given their long history in this province."

She continued, “in the weeks and months ahead, I will be sitting down with other service providers, the private sector and local government to discuss how we can ensure people have access to safe, reliable and affordable transportation to get from one community to the next. In the meantime, I hope that other local, private operators will see an opportunity to bring a badly needed service to the parts of the province most affected by Greyhound’s decision.”

Bus service will continue as normal in all regions until October 31, when operations will cease in western Canada.

Alternative methods of transportation exist, but few are as economical and convenient as Greyhound. Train and plane services operate in many of the major towns and cities along the Greyhound network (at much steeper cost than a bus ticket), but dozens of small towns and Indigenous communities will be left behind.

“It is already well documented that our citizens have to ride the bus for hours, some longer than 14 hours, in order to see a doctor. How will they get access to adequate health care now?" Grand Chief Arlen Dumas of the Assembly of Manitoba Chiefs stated in an interview with Global News.

The lady in the opening of

The lady in the opening of the story says that she won't be able to visit her family when Greyhound stops the service and she can't use her car because it is in need of repair. If that is the case and her family wants her to visit four times a year , then why don't they chip in to repair her car instead of the NDP wanting the rest of Canada to pay for her trips. But as usual the NDP are good at making noise on any issue just to try and score some points and it has gotten worse under the present leader.The NDP started out from socialist roots and they appear to want to return there; Government control of every thing.

The income gap between the

The income gap between the haves and have nots is widening; boomers are aging out of employment into poverty in ever increasing numbers; the age of the golden handshake and a tidy pension for all is long past if it ever existed at all. Circumstances are difficult enough already for people living in remote communities. The need is quite obviously societal, and detrimental. The regional and intercity services that Greyhound offers will be increasingly important for people, not less so as Greyhound’s financials seem to be suggesting. I find those claims to be questionable. And anyway, why not mount a public awareness campaign, promote the benefits, bump fares by 20% and maintain the service? I just don’t buy the story that cheap airfare and car ownership is driving a decline in profitability. So what’s the real story?

For many of the people who depend on this service there is no plan B, no reverse mortgage option, and no ‘dipping into savings’ in order to make up the difference when this affordable service is terminated. There is however, the option of isolation, dispair, loneliness, dislocation, suffering due to unaddressed health issues, dangerous travel, especially for women forced instead to hitchhike.

My understanding is that Greyhound was sold a number of years ago, and as these things seem to go, the buyer is chopping dispassionately. Fair enough, but I suspect that more could have been done, and as far as we’re aware there were no discussions with government. That would have been a sound strategy move for a company dedicated to maintaining this important service to customers. Kinder Morgan, also an American company operating under a Canadian subsidiary had that figured out; they played a long game, coersed the feds into nationalizing their business interest and it earned them $4.5B.

I would agree with the sentiments of many, that Greyhound has acted with a calous disregard for the people who’s custom has been the life-blood of the company. Fail...

Here’s hoping a solution is found to Greyhound’s abrogation.