By Farid Iskander | Opinion, Politics | July 12th 2018
#33 of 55 articles from the Special Report: Letters to the Editor 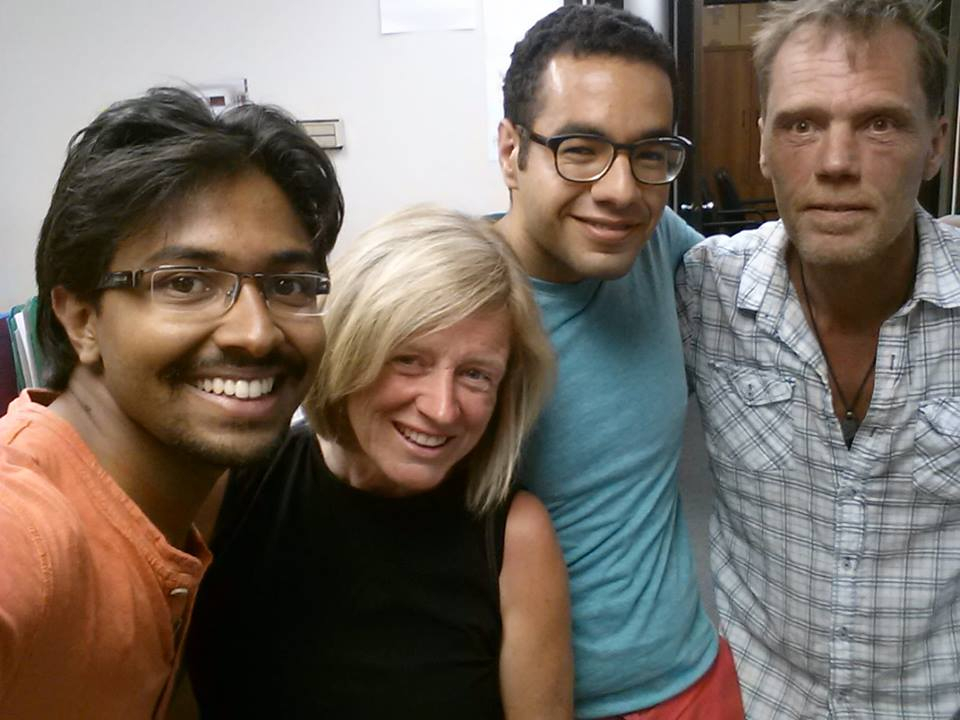 Last week, I spent more than 36 hours on a bridge, standing and sleeping more than 100 feet in the air in order to block the path of a tanker carrying oil from the Alberta tar sands — not what you might expect from a former volunteer for Rachel Notley, who yesterday indicated her government was likely to buy a stake in the Trans Mountain Expansion Project.

This was the first time I’d ever participated in a non-violent direct action of this kind on such a scale. It was also the first time in my life that I’ve been arrested.

On July 3 at 2:00 a.m., accompanied by 11 other people, I began to climb the Ironworkers Memorial Bridge in Vancouver, B.C. Seven of us would soon rappel from the bridge, supported by myself and four other courageous people who secured their safety and well-being from the bridge catwalk above. Together, we blocked the path of an oil tanker, Serene Sea, while it was docked at Kinder Morgan’s Trans Mountain pipeline terminal. We blocked the tanker’s path for more than 36 hours until we were extracted by the RCMP.

Each of us had our own reasons for being up on that bridge. For me, it was the anger that had been building up inside me as I watched my party, the Alberta NDP, lose its way. During these hours, and in the days that followed, I’ve had time to reflect on what brought me on that bridge.

I believed in Notley's vision for Alberta

I moved to Edmonton, Alberta, from Cairo, Egypt, in 2007, and have been a settler on Treaty 6 ever since. This land, this city is special to me. I became a member of the NDP in 2011. I volunteered for Rachel Notley’s leadership campaign in 2014, a year before she outdid everyone’s expectation and won the election. I believed in her vision for Alberta, which included a serious just transition to a green economy. But as her term as Premier went on, I slowly became disillusioned by her decisions, especially when she decided to put all of her political eggs in the basket of Texan oil company, Kinder Morgan.

It started with the ridiculous ban on B.C. wine. Then the government spent taxpayer dollars on a marketing campaign on the company’s behalf. They also passed protectionist “turn off the taps” legislation to choke off petroleum shipments to B.C. While I was under the impression that I was a card-carrying member of a social democratic party, I watched my party revert to nationalism and protectionism.

While Notley’s actions left me dazed and disenchanted, none of them matched the federal government’s audacity in purchasing the existing pipeline and expansion project infrastructure outright to the tune of $4.5 billion in Canadians’ money. As someone with left-leaning politics, I have been given multiple lectures from people on the right about the evils of deficit-spending—people who are now only too happy to see the federal government fork out billions in taxpayers dollars to clean up an oil company’s mess. Any talk about not having enough money to bring water treatment on First Nation reserves up to the standard enjoyed by settler Canadians is now a farce, given that it would cost less than the buyout.

"I believed in her vision for Alberta...I slowly became disillusioned by her decisions, especially when she decided to put all of her political eggs in the basket of a Texan oil company." #cdnpoli #ableg #KinderMorgan

Governments are accountable to people, not corporations

When I lost my political party, non-violent direct action became the only tool I had to stand up for my beliefs. And when the Premier Notley and Prime Minister Trudeau decided to purchase this project, the idea of getting arrested for this cause stopped scaring me. The interests of Canadians, especially those communities living on the margins, should always come before the interests of wealthy shareholders of a Texas oil company.

That principle, the idea that governments are accountable to people and not corporations, is worth standing up for.

It was truly an honour for me to play a small role in the Indigenous-led resistance to protect water, land and our climate from tar sands pipelines like the Trans Mountain Expansion. After seeing the dedication of the team behind the Ironworker Bridge blockade, I know that we will win this fight. From Alberta to B.C., the people will stop this pipeline together.

Farid Iskandar is an organizer with Climate Justice Edmonton. He spent 36 hours on a bridge helping to blockade an oil tanker as part of a Greenpeace Canada protest on July 3rd and 4th.

Thank you Farid Iskandar for

Thank you Farid Iskandar for your defence of our Super Natural Environment.

Good. But a politician has to

Good. But a politician has to lead within the milieu of the politics around her. I disagree with Notley but I no longer think she has a choice. On the other hand, I no longer choose to see the NDP in AB as providing solutions and must support other activities. Sad.

Spot on!
Except that there is NO EVIDENCE that Notley has any hope of re-election in 2019 against a united conservative party if she builds pipelines. Mathematically no such possibility exists. Even the NDP's unprecedented 2015 numbers would not yield such a result.
Conservatives wouldn't vote for Notley even if she built a billion pipelines. Notley's bizarre miscalculation has cost her the support of many traditional NDP voters like Farid Iskandar.
And yours truly!

"If anything, [Notley] has out-Kenneyed Kenney. It is her own provincial base that will be her undoing. NDP supporters are not kind to leaders who talk progressivism on the campaign trail and then become corporate cheerleaders in office." (Michael Harris)
• ipolitics [dot] ca/2018/05/24/to-avoid-a-political-divorce-singh-is-going-to-have-to-stand-up-to-notley/

UCP Leader Jason Kenney: “I’ve never believed there is a large number of Alberta voters whose ballot question is energy or pipelines who are likely to vote for the NDP. The NDP electorate is not people who get up in the morning passionate about pipelines and energy.”
• w w w [dot] theglobeandmail [dot] com/canada/alberta/article-trans-mountain-pipeline-fight-is-a-lifeline-for-rachel-notleys-re/

Direct actions certainly get the press coverage and bring out the old white men in wigs and bifocals who shake their fingers and levy fines and jail sentences. Perfect vestiges of the ancien regime, the usual suspects in the crimes of oppression and worship of wealth at whatever cost to others. They were/are the people who supported slavery, Jim Crow, and the genocide of indigenous peoples. They are now engaged in a desperate and vicious rear guard action to maintain the old privileged orders. But they are doomed - come the revolution....

Exactly. Question is, who

Exactly. Question is, who among us are going to join this young man, and all those brave others on the ground, who push against the dominators and move civilization forward? As Trudeau has said repeatedly, "It's communities who give permission".

Will the Canadian community prove how absolutely right he is, and stop this pipeline? In the anthropocene, its not longer possible to watch from the sidelines, and take the long view. Mother Nature has about had it with the lot of us.

I guess I'm going to have to

I guess I'm going to have to adopt you, Farid! (I've been doing that a lot lately!)
In advance of that Alberta election, I too participated in a telephone canpaign from the NDP
headquarters here in Burnaby, and spoke to many hopeful voters. Then, as Farid has so eloquently detailed, everything sunk! The Alberta version of NDP is SO FAR to the right, it's no longer believable!
So we shall indeed see, come 2019...!

Seriously? The Alberta version of the NDP is SO FAR to the right?? What exactly do you understand by the right?
Personally, I think a lot of progressives (whatever that dubious label means) are politically deficit. They've grown up having an enemy, and they feel lost without one. They haven't put their energy into electoral politics in many cases...believing there was little hope of anything but conservative in Alberta. So suddenly, there's an NDP win and they expect everything to change. The left will do in 4 years what the conservatives refused to do in 44....

It's unrealistic. It also overlooks how much power the conservatives yielded to CAPP and the Oil and Gas industry...how embedded all those boys are in everything. So elected in an oil recession, Rachel Notley has tried to work with Alberta's dominant industry....to the extent of supporting a bad pipeline, that seems the last chance of the bitumen extractivists. Anyone who understand climate change can't be happy with that.

But her government has also created a 30% rebate if you put up solar panels. Have you done your roof yet? Her government is building the Cancer centre Cons promised us in at least two elections, and then reneged on having to spend the money. We will have a 15 minimum wage before Kenny sweeps the province, according to your calculations....and perhaps some of us will pay attention long enough to watch him roll that back. If those of us on the loose left, give a rat's ass about the working poor; the far right doesn't.

If you follow politics at all, you'd know that on everything but pipelines and oil royalties, the Notley government has given us better government than anything the Cons have done in the last dozen years. And they defend women's right to choose, the rights of students to participate in gay straight alliances. They've brought our labour laws up to where other province's are, with the result that unions are forming again in low wage occupations. They've moved to protect wilderness areas like the eastern slopes and the Castle wilderness. They've put money back into the court system so murderers don't walk because too much time has elapsed before we can get them into a court room!!!

Do a little research before you throw those left-right labels around. Good government is not a one issue, or a one industry game. And it will always fail, if citizen's don't have the patience and commitment to pay attention and stay involved.

Thank you, Farid Isakandar, for your efforts on behalf of those of us who cherish our natural environment.