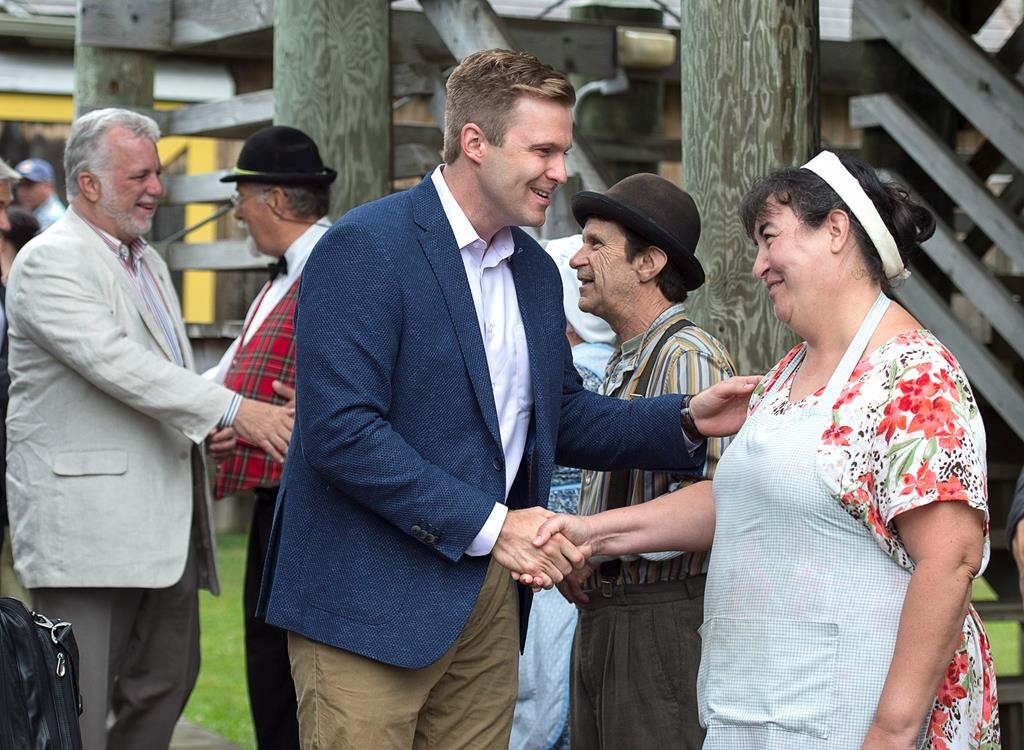 Brian Gallant, followed by Philippe Couillard greets performers as they arrive for a meeting of Canadian premiers and Indigenous leaders at Le Pays de la Sagouine in Bouctouche, N.B. on July 18, 2018. Photo by The Canadian Press/Andrew Vaughan
Previous story
Next story

Canada's premiers emerged from meetings with Indigenous organizations Wednesday with little in the way of concrete initiatives after several major Aboriginal groups refused to participate in the gathering for the second year in a row.

Three of the country's largest Indigenous groups — the Assembly of First Nations, the Inuit Tapiriit Kanatami and the Metis National Council — all bowed out of the talks in Bouctouche, N.B., held a day before provincial leaders are set to gather in St. Andrew's, N.B., for their annual Council of the Federation meetings Thursday and Friday.

However, Congress of Aboriginal Peoples national chief Robert Bertrand, who represents off-reserve Indigenous people, attended the meeting along with Francyne Joe, president of the Native Women's Association of Canada.

"I think that having CAP and the native Women's Association here was beneficial," said Gallant. "I think the presentations were great and I think today would have been that much greater had we had the other three organizations present."

Ahead of the meeting, Northwest Territories Premier Bob McLeod said it may be time to look at other options in order to attract more groups to the table.

"I'll be suggesting that we take another look at it and find a better way, and I think we can do it," he said.

Gallant said finding an alternative to satisfy other Indigenous groups would likely be discussed over the coming days. Three premiers also didn't attend the meeting, including Doug Ford of Ontario, John Horgan of British Columbia and Nova Scotia's Stephen MacNeil.

Still, Bertrand said he believes there is value in meeting the premiers.

"We are not necessarily pushing one organization versus another one. We are all working to improve the life of our constituents, whether it's the on reserve or off reserve," he said. "We've all seen on TV the pictures of poverty and these problems. They have to be resolved."

Joe said the issues facing organizations like her own were far too important for her to pass on the meeting.

"I think the information that was shared with the premiers and the presenters is going to lead us forward and we are going to be able to collaborate in the future to actually make a difference in these areas," Joe said in reference to economic development and child poverty.

But Clement Chartier, president of the Metis National Council, said the three Indigenous organizations are the national representatives of Indigenous Peoples and "should be respected as such."

He said they should be included in official government meetings, not put on the sidelines like a special-interest group.

Assembly of First Nations National Chief Perry Bellegarde said he would not attend the meeting because of ongoing concerns about minimizing the participation of First Nations in the Council of the Federation meetings, pre-meetings and other intergovernmental forums.

Although a regional chief had planned to attend, Bellegarde said in a statement that changed "when we learned First Nations leadership identified on the draft agenda had not been contacted and had not received invitations to date or (been) treated with appropriate protocol and respect."

"The AFN will continue to push for an effective, respectful process for intergovernmental relations that reflects government-to-government relationships, First Nations rights, title and jurisdiction," Bellegarde said.

"This is a meeting that happens only once every four years with representatives from the four circumpolar Inuit regions (Canada, Greenland, US and Russia)," Erin Brandt Filliter said in an email.

She later clarified that the Inuit Tapiriit Kanatami is advocating for closer collaboration in working with the Council of the Federation.

Presentations were made at Wednesday's meeting by other speakers, including Kim Nash-McKinley of the St. Mary's First Nation, Jake Augustine of McGraw Seafood Inc., and Jennifer Dockstator, project director for the National Centre for Collaboration in Indigenous Education.

- With files by Brett Bundale in Halifax

I was just this week