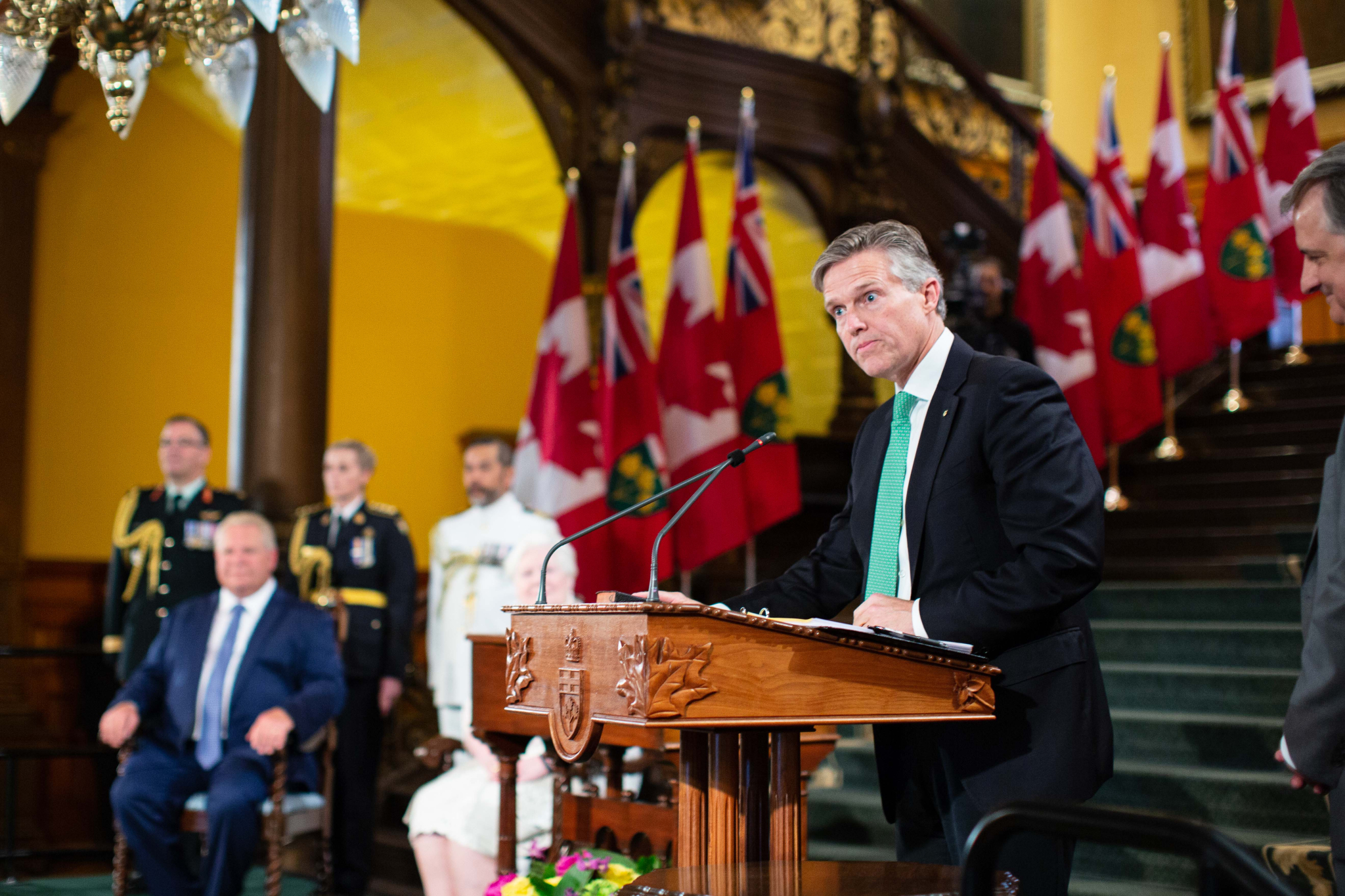 Minister of the Environment, Conservation and Parks Rod Phillips at his swearing in ceremony at Queen's Park, Toronto, on June 28th 2018. Photo by Alex Tétreault
Previous story
Next story

Premier Doug Ford's government has introduced a new plan at the Ontario legislature to minimize the province's losses following its decision to abandon a joint carbon trading market with Quebec and California.

Leading experts and opposition critics have warned the government that the province could lose billions of dollars if it proceeds with plans to cancel the cap and trade market, triggering losses for companies that have already invested in the market.

But Ontario Environment Minister Rod Phillips told reporters at a news conference on Wednesday that the government's new legislation, the Cap and Trade Cancellation Act, would limit losses to $5 million, while requiring him to come up with a new climate change plan, targets to reduce emissions, and progress reports.

"We made it clear that we would fight this tax with all of the resources we had available," said Phillips of cap and trade, which was referred to as such throughout Ford's campaign, "and our government is following through on that."

Phillips took questions from reporters before they had a chance to review the new bill, which was tabled later on Wednesday afternoon.

"I can tell you that our government is looking forward to moving past the previous Liberal government's propensity to just raise taxes and instead focusing on an environmental plan that works," said Phillips.

Phillips unveiled several principles as part of what the government described as an "orderly wind-down" of the Wynne Liberals' climate change plan, estimating that the change in policy will cost taxpayers up to $5 million. The government said in documents released to the media that this would result in "minimizing impact to taxpayers of possible compensation."

The cap and trade market was designed to encourage reductions in greenhouse gas emissions and reward companies that exceed pollution targets by allowing them to sell credits to businesses that fail to meet their targets. Companies that purchased credits under the old system could seek compensation, but the Ford government has argued that consumers would save money on energy bills if it withdraws from the market.

The 272 companies in Ontario’s former carbon trading market have paid $2.87 billion for their allowances. The previous government also gave companies some free credits as part of the launch of the cap and trade program, which was terminated on July 3.

The new legislation also creates a formula for compensation that allows it to avoid counting any credits that were given out for free.

The head of a major industry group, the Ontario Energy Association, told National Observer in an emailed statement that it would support the new government's policies.

"The OEA will support the government in delivering on its commitment for its wind-down of the cap and trade system in an orderly manner,” said Vince Brescia, president and CEO of the association that represents a range of firms and energy companies, including Enbridge, TransCanada and Hydro One. "We continue to see the importance of a lower carbon future that is based on cost effective programs that protect both the environment and a competitive business environment in Ontario."

Phillips added that Ontario households could expect to see an average of $260 in annual savings as a result of the changes. But this estimate doesn't include the impact of federal carbon pricing and rebates that are expected in 2019.

The Ontario bill, if passed, would also require a measure to protect the province from companies that decide to take legal action against the province for leaving the carbon market before the end of the compliance period in 2021.

“We think this is critical to the economic vitality of the province,” Phillips told the press at 900 Bay St. before going to the legislature.

The minister reaffirmed that Ford’s government would pursue efforts with Saskatchewan to challenge the federal carbon tax in court.

'This is going to be pricey'

Peter Tabuns, NDP MPP for Toronto-Danforth​, said that the new legislation was a "really bad move" that demonstrated a failure to manage environmental risks.

“That's going to be a problem for a lot of people, but the other part of this is something like $2.6 billion was collected to deal with climate change — to repair schools, to make them more energy efficient, put money into social housing, to help people make their own homes more energy efficient, and all that's disappeared into some kind of Tory slush fund for some sort of backroom deal that is not apparent to people right now. This is going to be pricey and it's already damaging our climate action."

The cap and trade repeal measure is the fourth bill that Ford's government has tabled during its short time in office, and follows a series of actions that have unwound the province's climate strategy. Earlier this month, Energy Minister Greg Rickford announced legislation that would cancel 758 renewable energy contracts.

"This is a government that's going to keep a lot of lawyers happy for a long time to come," said Tabuns, who introduced legislation in March that would allow people and companies to sue oil and gas companies for their contributions to climate change.

Green Party Leader Mike Schreiner, whose June 7 victory gave the party its first legislative seat in Ontario's history, lambasted the new government's "anti-business agenda," which he says may lock the province out of the $7 trillion green energy economy.

“The only way that's a good news story is if they set better targets,” said Schreiner of the bill's requirement for the government to introduce new emissions targets. “If they're going to use this as an opportunity to weaken targets, that isn't what people voted for. People in Ontario want action on climate – they've already recognized that climate change is costing us big time. Billions of dollars from extreme weather events.

"We need action to protect the people of Ontario."

Editor's note: This article was updated at 4:45 p.m. ET with additional background information and quotes from Rod Phillips. It was updated again at 6:25 p.m with reaction from opposition parties and industry.

"We have delivered a

One question is whether the

One question is whether the federal rebate to Ontario households in 2019 will be more or less than $260. My guess is that it will be far more, enough even to more than compensate most people for the higher prices that will result from the federal levy.
Ontario working at cross-purposes like this is ridiculous. Makes Canada a laughing stock.

Here is one estimate: "In

Here is one estimate: "In 2016, Ontario emitted 160 million tonnes of carbon dioxide. If a carbon price of $20 a tonne was applied to those emissions, the $3.2 billion revenue could be divided equally among Ontario’s 14.2 million residents. An Ontario family of four would receive an annual $900 cheque that could climb to over $2,000 in 2022 when the levy reaches $50 a tonne - an approximation because as the tax rises the tax base will shrink over time." (Source: https://theconversation.com/taxpayers-will-back-a-carbon-tax-if-they-get...). A winning strategy.