Like SLĀV, Kanata is a missed opportunity for Robert Lepage 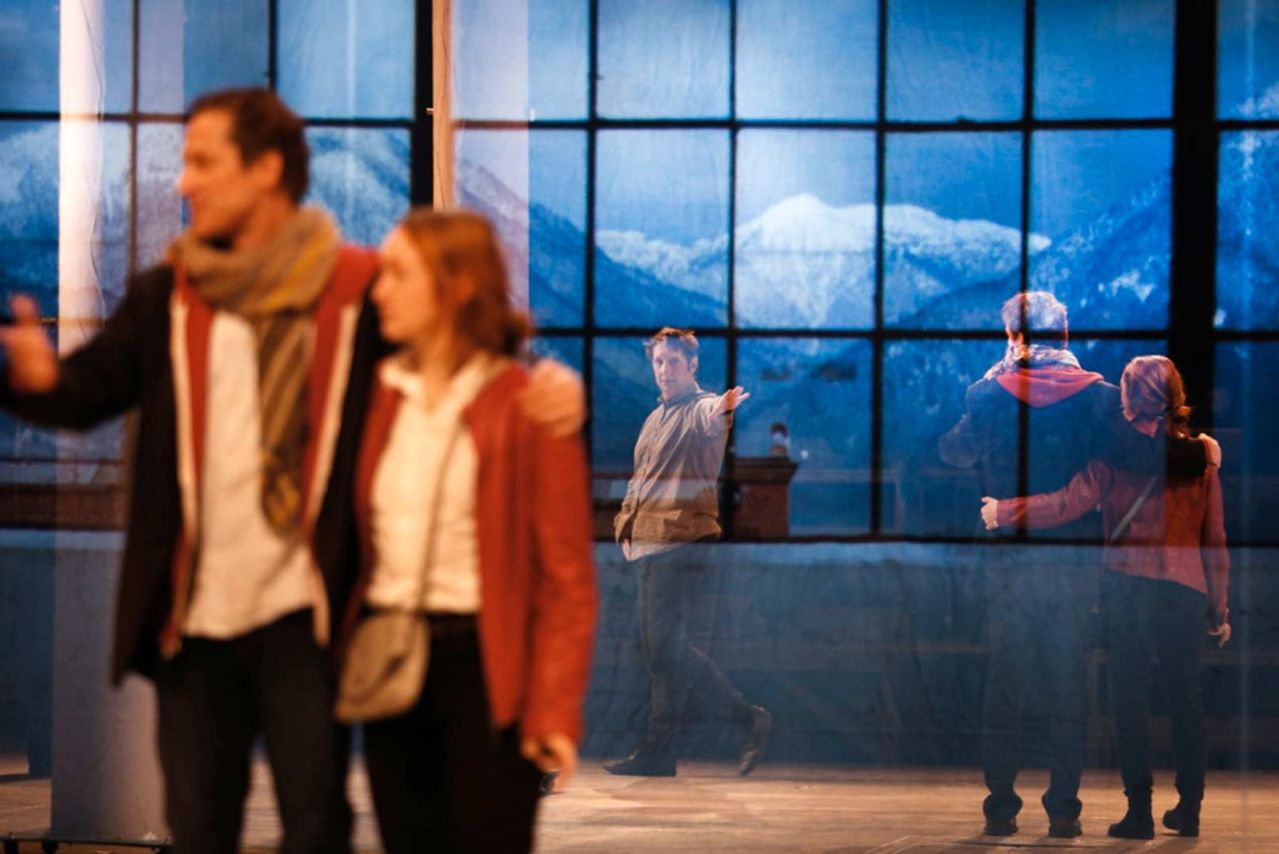 The news that Robert Lepage’s production, Kanata, which explores the relationship between Indigenous and non-Indigenous people, was cancelled this week, caught everyone in Quebec by surprise. According to Lepage, some of the show’s North-American co-producers decided to back out because it was mired in a cultural appropriation controversy. A statement issued by Ex Machina, the director's production company, explained that "without their financial support, we are unable to finish creating Kanata with Théâtre du Soleil. Therefore, we are putting an end to the project.”

In a moment of SLĀV deja-vu, Quebec pundits and politicians rushed to voice their displeasure and anger at the cancellation — many crying censorship and an attack on artistic freedom of expression, once again.

This flurry of outrage flowed out into social media even though it was external and mostly financial factors that were responsible for the production's fate, not government intervention.

Lepage admitted a “judgment error” in the way Kanata was developed, but he unfortunately didn’t do anything concrete to rectify his mistake and appease the people he offended. Even when, in 2016, the Canada Council for the Arts refused to fund the production because of the lack of Indigenous involvement, he still didn't make any changes. He chose, instead, to insist on his right to “creative freedom.” By all appearances, the decision to cancel the production was only made after financial backing was cut off. While I don't think Lepage is racist or malicious, his continued tone deafness displays arrogance and hubris, and this unfortunate turn of events seems to validate Indigenous concerns that Lepage still hasn't figured out that what he did was so offensive.

Lepage has said he won't be commenting further on the cancellation of his show.

A denial of Indigenous culture and retelling of history

Nakuset, the Executive Director of the Montreal Native Women’s Shelter, was one of the people who signed a letter in opposition to the production. Interviewed before Kanata was cancelled, she was clear about why she objected to it.

“We were shoved on to reservations, forced to sign treaties we barely understood, and we weren’t even allowed to leave the reservation unless we had a pass,” she explains. “People don’t know that when they built the first residential school, parents would go to jail if they didn’t give up their children. That’s almost 200 years of forced residential schools where we lost our language, our culture, our way of life. That has been happening to our people since the beginning of contact. Now we are getting to a place where we’re relearning our culture, our dances, our songs, our languages, and Lepage decides that he’s going to present our history, and he doesn’t even consult us?”

Nakuset worries that a lack of consultation will only produce troubling inaccuracies that will perpetuate stereotypes. “When Lepage doesn’t consult, that means he’s going to do his own version of what he thinks the (Indigenous) reality is, and that’s a huge problem. How is he getting his facts right?”

Like most of the project's critics, Nakuset didn’t necessarily want its cancellation, but hoped she could participate and help improve it. She bitterly cites decades-long examples of Hollywood portraying the Indigenous as either wise, glorified heroes or villains — and almost always by non-Indigenous actors.

“Lepage had an opportunity to actually learn about the culture…” she trails off. “What I would have loved is if he had hired a cultural consultant that was with him on set for the duration of the production. […] The costume the woman is wearing in the production is so cheap it looks like a Halloween costume,” she laughs. “It doesn’t even represent any particular nation. He’s presenting some sort of pan-Indian look, and that is damaging to Indigenous people and it’s damaging to the people who are watching because they think it’s an accurate depiction of us when it’s not.”

Steve Bonspiel, editor and publisher of The Eastern Door in Kahnawake, is also baffled by Lepage’s unwillingness to be open to change and collaboration when taking on someone else's history.

“We as Indigenous people have a voice,” he says. “One that Lepage needs to learn from and never dismiss. You cannot, no matter how educated you think you are, tell our stories without us. That is just not possible. You need us to provide the context, the pain, the suffering, the texture. Without that you’re left with a vapid production that continues to perpetuate stereotypes and ignores our very existence today.”

“Artistic license is one thing,” he says, “but continuing to steal what little we have left; to limit our voices and to shut us out; to treat us like we are part of history only: that has to stop!”

Despite the misconception that all critics of SLĀV and Kanata wanted to do was angrily shut down those productions, hellbent on revenge and retaliation, the truth is that these groups made repeated attempts to engage and seek a compromise. They didn’t want them shut down; they wanted them improved. It was in this spirit of reconciliation and collaboration that the group that wrote the letter met with Lepage for six entire hours.

“We were offering Lepage so many points of views, so many ways to include us and he basically said, ‘No, thanks.’ I think I can do a better job,’” says Nakuset. “I don’t understand why he’s now saying that he made an error of judgment. If you admit that you made an error in judgment than you fix it,” she continues. But despite sitting down with them, Lepage wouldn’t budge.

Asked about the accusation that criticism of Lepage’s work has been seen by many (politicians included) as an attack on Quebec culture, Nakuset quickly quips: “Our eleven nations are Quebec culture. We were here first when the boats came and now we’re one per cent of the population. We didn’t just fall over and die. We were slaughtered. We were forced into almost extinction.”

Nakuset insists that if Lepage had been willing to make a few changes — even after the Paris production ended — and acknowledge that improvements could be made by collaborating, they would have been satisfied. But, as it stood, his production was both offensive to Indigenous culture and inaccurate.

“If he insists on his own version of Kanata,” Nakuset says almost in jest, “then he should call it ‘Kanata: Robert Lepage’s version of what he thinks the relationship is between the Indigenous and non-Indigenous people. Do not take this seriously.’ That would at least be the truth."

A good way of breaking down this controversy is to simplistically re-imagine it as the story of two people. Imagine wanting to tell the story of Dave and Mary on stage and insisting on only interviewing Dave. How accurate and complete would your final story be? Now imagine that Dave enjoyed generous financial support and public support, while Mary had been silenced for years. When Mary attempts to add her voice to a story that is equally supposed to be about her, she’s not only told her input isn't required, but any criticism of the fact that her input is lacking is decried as censorship and an attack on artistic freedom. Is it so hard for people to understand why Mary might be a little irate?

No stories about us, without us

“We have lost everything,” Nakuset says. “We have a little bit left. We’re trying to teach our children, trying to regain our culture and our pride, and when Lepage insists on presenting his own inaccurate version of our story he’s rewriting history again. When our voices have been silenced, as they have for so long, just like they have for the black community, now they want to tell a story about us and not even invite us to get the facts right?”

Yet despite the growing understanding of many Quebecers that this kind of cultural appropriation isn’t right, many pundits and politicians are still on the defensive, intent on seeing it as censorship. Whether for easy political gain or genuinely incensed, it shows a disturbing inability to understand the difference between the consequences of public criticism and censorship, as well as a lack of empathy for the legitimate grievances expressed by both SLĀV and Kanata critics.

So appalled are some by the "power" Indigenous community’s demands had to cancel the show that a Quebec City editorial cartoonist tastelessly depicted Lepage as having been “scalped” by them; implying he was the real victim. This is a fear that has been expressed often by many activists who get labeled as violent and aggressive, while those who enjoy great media exposure and financial support get to label themselves as wronged. The fact that so many folks who point out cultural appropriation are treated with such a disproportionate amount of disdain for daring to object, speaks volumes about the establishment’s desire to silence dissent.

“The image maintains the perception and reminds that some still see us as savages,” said Nakuset upon seeing the cartoon.

And that right there is the crux of the problem for Indigenous groups. Even with the best of intentions, Lepage cannot possibly create anything of real value without their input. When misinformation and clichés inform and guide a creative project you are doing everyone a disservice – the audience included. And so-called artistic freedom does not give anyone a license to misinform and perpetuate damaging falsehoods and clichés, no matter how sincere the intent might be. Particularly for a community that has been silenced and erroneously portrayed for so long.

“In a world that is filled with so many stories, so many tragedies and comedies, and such rich texture as the people who lived all of it and can articulate their own experiences, I question why (or how) Robert Lepage, as an artist, fails to see it, and I call on him and his people to change,” says Steve Bonspiel.

“We are a living, breathing, successful and proud people. And we will no longer follow the tides that try to push us to do the bidding of the majority. Those days are over.”

With his undisputable artistry, talent, and years of experience, Lepage could have chosen to cast aside his ego. He could have chosen to serve as a leader by truly hearing the concerns of these two marginalized groups and working with them to ensure better representation and accuracy in his pieces. That type of decision and generosity of spirit could have helped usher in a new era of collaboration. This, in turn, would better represent and reflect the times we are living in, where reconciliation is seen as a government priority and where Black Lives Matter have raised new public awareness about the struggles so often unseen by the white majority.

Instead, Lepage chose to stubbornly stand his ground and reluctantly come to terms with the possibility of inflicted injury, when even minor concessions would have been gratefully greeted as the first step towards an understanding. One can only hope that a man so capable of producing such beauty on stage might — after the dust and disappointment have settled — extend that hand so many are hoping for.

It's not too late for some self-reflection.

Toula Drimonis writes from Montreal. Use the promo code TOULA today and save 20% on an annual subscription to National Observer.

SLĀV: Why was the response to critics so insulting and shaming?

A missed opportunity is a sad

A missed opportunity is a sad thing. We can't undo the past, but we can create our present and future. Here's hoping Lepage will reconsider and collaborate with the people he wanted to present on stage.