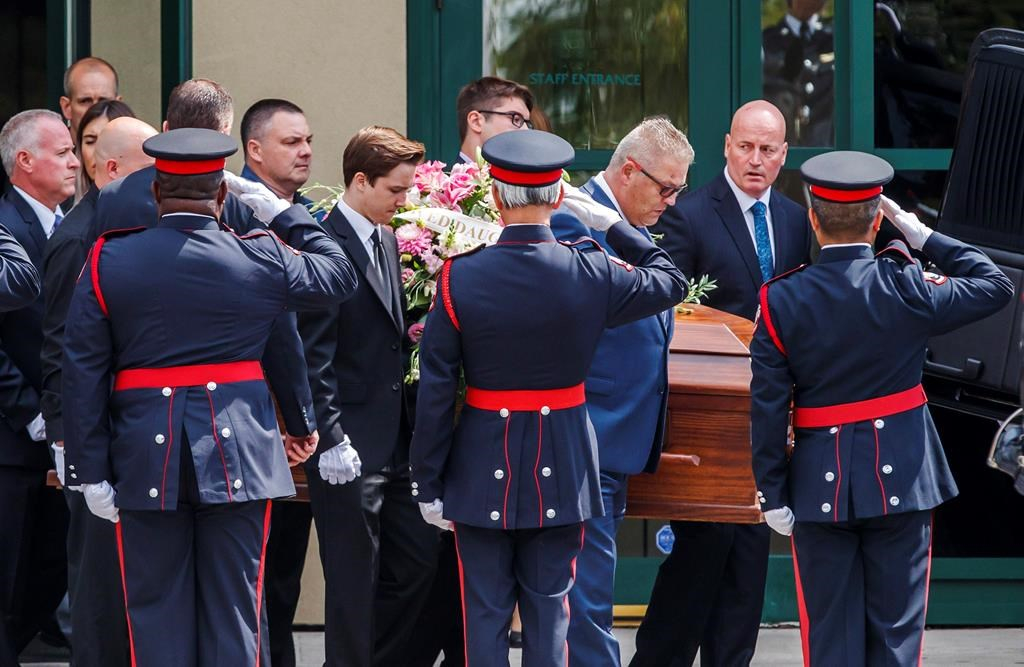 Mourners converged on two private funeral services on Monday to bid goodbye to the two young victims slain in the mass shooting in Toronto's Greektown neighbourhood.

Reese Fallon, 18, and 10-year-old Julianna Kozis were laid to rest in separate funeral services that took place away from the public eye.

Dignitaries including Prime Minister Justin Trudeau and Ontario deputy premier Christine Elliott were on hand at the Toronto funeral home where mourners came to pay their respects to Fallon, a recent high school graduate who was due to start studying nursing at Hamilton's McMaster University in the fall.

With police maintaining a heavy presence around the building, groups of teens holding hands and exchanging hugs quietly entered to say their goodbyes.

Further north in Markham, Ont., mourners arrived at a Greek Orthodox church where a service was taking place to honour Kozis.

A small group of funeral attendees watched as pallbearers lifted a white casket out of a hearse and into the ornate building. Some leaned on each other for support while others stood with their hands clasped in front of them.

The girl's family issued a brief statement expressing gratitude for the community's overwhelming support but requesting privacy as they mourn their daughter.

Kozis, who neighbours described as an outgoing and athletic child, was on a family outing on Danforth Avenue when she was caught in a hail of bullets fired by 29-year-old Faisal Hussain.

Fallon died while enjoying a night out with friends, including fellow members of the Young Liberals youth political organization. In an obituary for Fallon, family members said the teen would be "deeply missed but not forgotten."

After the service, pink and purple flowers covered Fallon's casket as it was placed in the hearse. Her friends and family cried and hugged each other as the procession drove away.

Some of Fallon's friends, as well as Kozis' father, are believed to be among the 13 people injured in Hussain's attack. The gunman himself was found dead shortly after exchanging gunfire with two police officers.

Trudeau is expected to continue paying tribute to the Greektown shooting victims throughout the day on Monday. The Prime Minister is slated to visit a parkette on the Danforth that has become a makeshift memorial for the victims of the attack.

The fountain at Alexander the Great parkette was ringed with bouquets, candles, stuffed animals and other mementos.

Boxes of chalk were left out for mourners to leave messages of love and remembrance.

Dozens of people took photos or stood silently taking in the scene.

Leslie Savlov, who lives just down the street from the parkette, heard gunshots and saw people hiding in the bushes nearby on the night of the shooting.

He has mixed feelings about the crowded memorial site, he said.

"Certainly it's necessary but in a way it's a constant reminder of what happened," Savlov said. "It took me a lot of days to process this, it's very very emotional for me."

— With files from Alanna Rizza and Peter Goffin.