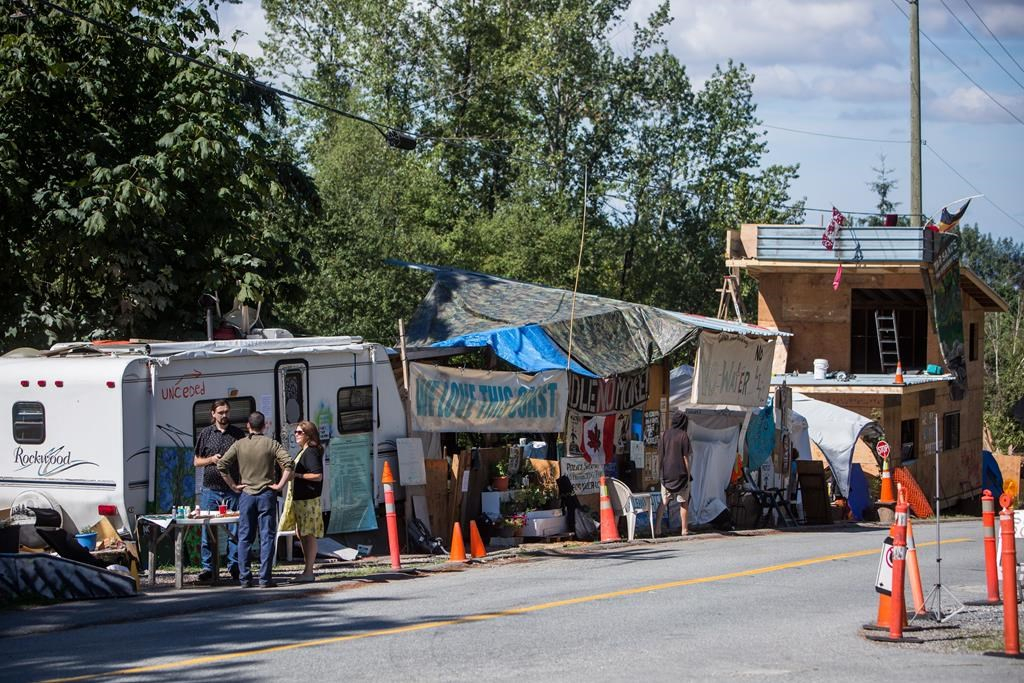 Camp Cloud is pictured near the entrance of the Kinder Morgan Trans Mountain pipeline facility in Burnaby, B.C., on Saturday, July 21, 2018. File photo by The Canadian Press/Ben Nelms
Previous story

A British Columbia Supreme Court judge has granted the City of Burnaby an injunction forcing pipeline protesters to take down their camp outside a Kinder Morgan terminal.

Justice Geoffrey Gomery said all structures, shelters and vehicles must be removed from the site known as Camp Cloud within 48 hours of the order issued on Friday afternoon.

The judge also ordered that a sacred fire burning under very dry conditions and near a Shell aviation fuel tank farm must be extinguished.

However, peaceful protesting is still permitted, he said. Individuals are allowed on the site as long as they do not build more structures and camp overnight.

No one appeared in court on behalf of the protesters, although half a dozen supporters watched proceedings from the gallery.

In his judgment, Gomery noted that an argument based on Aboriginal title claims could have in principle qualified. However he said the position the protesters have advanced through media on that subject, so far as he understands it, is not arguable.

There is no evidence the individuals are associated with the Squamish or Tsleil-Waututh First Nations, which claim rights to the land in question, he said.

Gomery also said he believed the focus of Camp Cloud has shifted over time.

"It is unfortunately clear that the goals of the defendants and occupants of Camp Cloud have evolved. While they established the camp for the purpose of protesting the Kinder Morgan pipeline expansion, they've now begun to view the campsite as their land. They're blocking a public right of way and members of the public have been made to feel unwelcome," he said.

One protester threatened to "drop kick" and "kill" a fire official and an official from the parks department was chased away, he said.

Camp Cloud has grown since November from a single trailer to include a two-storey wooden structure, a cabin, an outdoor shower, more than a dozen tents and multiple vehicles and trailers.

City of Burnaby lawyer Gregory McDade told the judge that while the city supports peaceful protests, the camp violates several bylaws, trespasses on city property and constitutes a public nuisance.

The city has had a positive dialogue with a separate protest group that gathers around a structure known as the Watch House, he said. McDade said when the city communicated the fire ban to the Watch House protesters, they conducted a ceremony and extinguished their own sacred fire.

Camp Cloud spokeswoman Kwitsel Tatel, who is named as a defendant, said in a statement that putting out the sacred fire or removing any of the camp's buildings would be a violation of not only the right to free expression, but also deeply held religious beliefs.

She posted a "call for solidarity" on Facebook, hours before the ruling.

"Our camp is unified and centred around the sacred fire, which since time immemorial, has been central to the governance of Indigenous peoples," the post said.

"We are a peaceful coalition that is gravely concerned for the national interest, respect, dignity of public interest, public health and the protection of safe and clean water for all our generations to come on these sacred lands of so-called Canada."

She said the group is raising awareness about the "ecocide and genocide" that is continuing to take place against Indigenous and non-Indigenous peoples, due to ongoing threats to water.

Asked what she would do if the judge ruled in favour of the city, ahead of the ruling, she said only: "Good question for all 'Canadians!' "

From the beginning, judges

From the beginning, judges assigned to every court date for pipeline protester cases have been prejudiced AGAINST them! The decision here to dismantle Camp Cloud is another weary example of old white men cooped up in their glass courtrooms, oblivious of reality, which reveals that Camp Cloud is NOT obstructing ANYTHING!!!
The ONE THING that would make protesters go home is the STOPPING of this PIPELINE MADNESS!!!

And another thing: although

And another thing: although Burnaby mayor and council are on record as opposing the pipeline, they have yet to put their words into ACTION. Nobody from city hall has been up the mountain so how could they possibly understand the fact that the campers are not even close to the residential area?!
It's PAST TIME for politicians to ACT!!