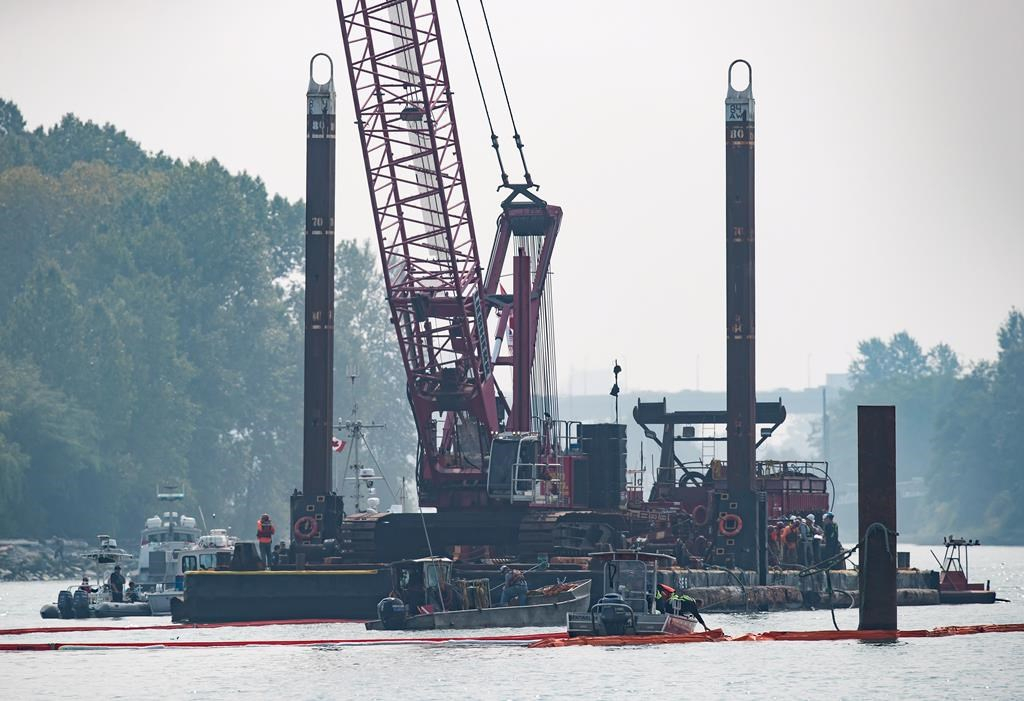 The capsized that sank tug near Vancouver on Monday is now secured. Photo by the Canadian Press.
Previous story

The smell of diesel filled the air as crews worked to recover a capsized tugboat that spilled as much as 22,000 litres of the fuel in the Fraser River between Vancouver and Richmond on Tuesday.

There were four people aboard the vessel and all were rescued by the crew on a nearby tug, Bate said.

The capsized vessel is part of a gravel tug-and-tow operation, but it was not towing a barge at the time. The vessel was about three-quarters submerged and had been secured to pilings, Bate said.

While the tug’s fuel capacity is 22,000 litres, he said crews are still assessing the total volume of the fuel spill.

It’s unclear what the impact of the spill will be on the ecosystem, which is at the north arm of the salmon-bearing Fraser River.

“Right now it’s too early to see what that looks like, obviously it will depend on the quantities and actions that are taken,” Bate said.

Booms and absorbent pads have been placed around the vessel by the coast guard and Western Canada Marine Response Corporation, the organization responsible for responding to oil spills along the B.C. coast.

Michael Lowry with Western Canada Marine Response said the company has been retained by Ledcor, which operates the tug, and about 15 bags of the absorbent pads have already been collected.

It’s unclear what the impact of the spill will be on the ecosystem, which is at the north arm of the salmon-bearing Fraser River. #salmon #bcpoli

He said the pads are put in place when there a “light sheen” on the water, adding it was impossible to tell how much diesel had been soaked up.

David Hoff with Ledcor said crews were working to recover the vessel.

“We have a crane on site and divers have already been down to see the tug and they have been down again to assess how we are going to do a lift,” Hoff said. “We are hoping to do a lift later on this afternoon and hope to have the craft out of the water by around dinner time.”

In a statement, the First Nation said the fuel spill is “of great concern” to the Musqueam people, who have been fishing the biggest salmon return in years on the Fraser River alongside other fishermen.

Musqueam has deployed staff to monitor the containment and cleanup, it said, however Chief Wayne Sparrow expressed frustration that the First Nation has done so without any federal support through the $1.5-billion Oceans Protection Plan.

“The impact of what has happened with this immediate situation is an indication of what is to come as far as additional tanker traffic, barges and pollution. We are not in opposition to Canada’s plan on industrialization of the river, but we need to be there at the front of any kind of emergency response, period,” Sparrow said in the statement.

Another glimpse into our

Another glimpse into our future should the TMX be built. We need to learn from our mistakes and not repeat them! Keep oil/diesel/dilbit out of our waters!!

The answer to spillage would

The answer to spillage would appear to be the genetic modification of marine life in order for them to live in harmony with polluted seas. Would Amarjeet and Jimmy Carr agree? Ms. Notley? Justin Trudeau? Ms. McKenna?