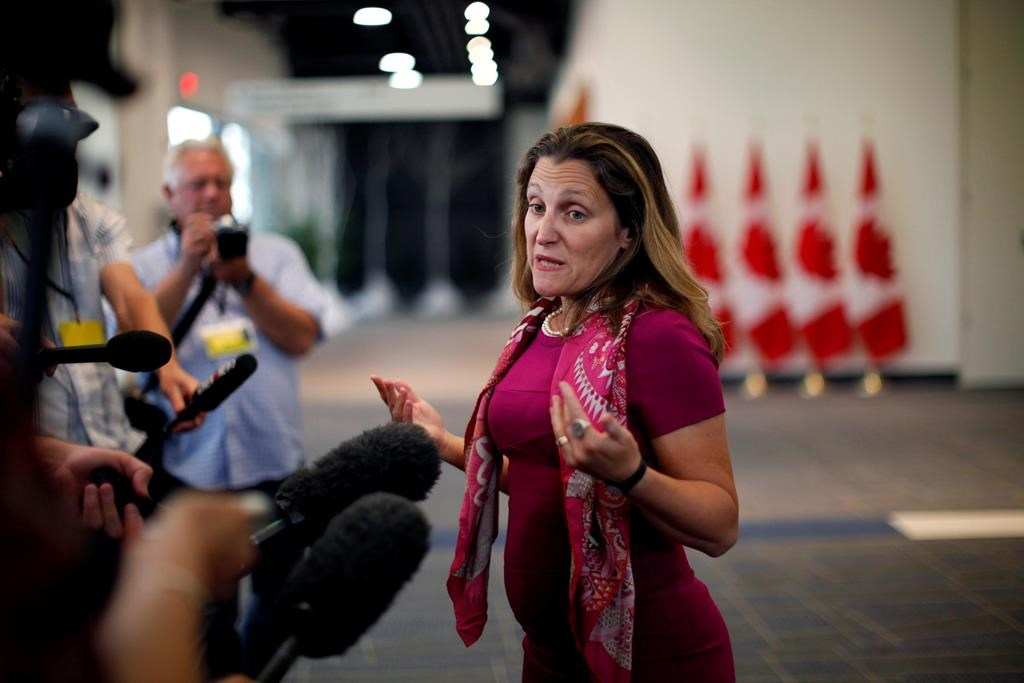 Minister of Foreign Affairs Chrystia Freeland arrives to speak to media at the Vancouver Island Conference Centre during day two of the Liberal cabinet retreat in Nanaimo, B.C., on Wednesday, August 22, 2018. Photo by The Canadian Press/Chad Hipolito
Previous story

Foreign Affairs Minister Chrystia Freeland says she's "very encouraged" by signals from Washington that the United States and Mexico are close to figuring out their bilateral issues within the three-country North American Free Trade Agreement.

But even with the prospect of progress, it remained unclear Wednesday precisely when Canada might be invited back to the bargaining table, let alone when — or even if — the three continental neighbours might wrap up the renegotiation effort that began more than a year ago.

Freeland said she has been in close contact with her U.S. and Mexican counterparts throughout their two-way NAFTA talks, which are now in their fifth week. The issue of rules of origin on autos has been central to the summertime U.S.-Mexico discussions, she added.

"We are very encouraged by what we're hearing from our NAFTA partners," Freeland said in Nanaimo, B.C., where she's taking part in a Liberal government cabinet retreat.

"What we've agreed with the U.S. and Mexico is, once the work on those bilateral issues is done, then Canada is looking forward to joining the negotiation and a swift conclusion of the NAFTA negotiations."

There's optimism that U.S. Trade Representative Robert Lighthizer and Mexican Economy Minister Ildefonso Guajardo could conclude their face-to-face negotiations as early as this week — and open the door for Canada to re-enter the talks.

A report by Politico, based on information from unidentified sources, said the White House is expected to announce a "handshake" deal between the U.S. and Mexico on Thursday. U.S. President Donald Trump is expected to attend the announcement, the report said.

In Washington, Guajardo said Wednesday that he hoped to have a solution in "the next couple of hours, or couple of days." However, on the possibility of a handshake deal, Guajardo said it would have to involve all three countries.

"What we're doing here is trying to get and solve the issues that are most important between the U.S. and Mexico — that will lead to a trilateral meeting with Canada," he said.

"I think the handshake happens when everybody's done."

Some observers believe the Trump administration has sidelined Ottawa from the NAFTA negotiations. The federal government, a few have warned, could find itself forced into deciding whether to accept a less-appetizing deal hashed out between the U.S. and Mexico.

But Canadian officials, as well as officials from the U.S. and Mexico, have insisted the two-way NAFTA talks are necessary before the three-party negotiations can restart.

"NAFTA is a trilateral agreement, but inside that agreement there are a lot of issues that are chiefly bilateral and that is what they're focused on," Freeland said.

The rules of origin on cars is an issue that concerns all three countries — and one where detail matters, she added. "And Canada will very much have a voice in the finalization of all of this."

Last week, Trump suggested that Canada had deliberately been frozen out of the NAFTA talks.

"We're not negotiating with Canada right now," the president said during a televised cabinet meeting. "Their tariffs are too high, their barriers are too strong, so we're not even talking to them right now. But we'll see how that works out. It will only work out to our favour."

Even after the trilateral negotiations resume, the three partners will have to deal with a number of tough sticking points. They include the U.S. proposal that NAFTA include a five-year sunset clause, which has been flatly rejected by the Trudeau Liberals.

This week, media outlets have also said the talks could have a new hurdle: how to address energy issues in a renegotiated NAFTA.

Energy, the Journal reported, was left out of the original NAFTA when it came into force 24 years ago because Mexico's state monopoly on oil didn't allow private investment in the industry. In 2013, however, the Mexican government opened up the industry to investment — a decision opposed by Obrador.

Trudeau affirms importance of NAFTA amid rumbling of U.S.-Mexico deal

Canada seeks intensive NAFTA talks, even if Trump's in no rush to sign