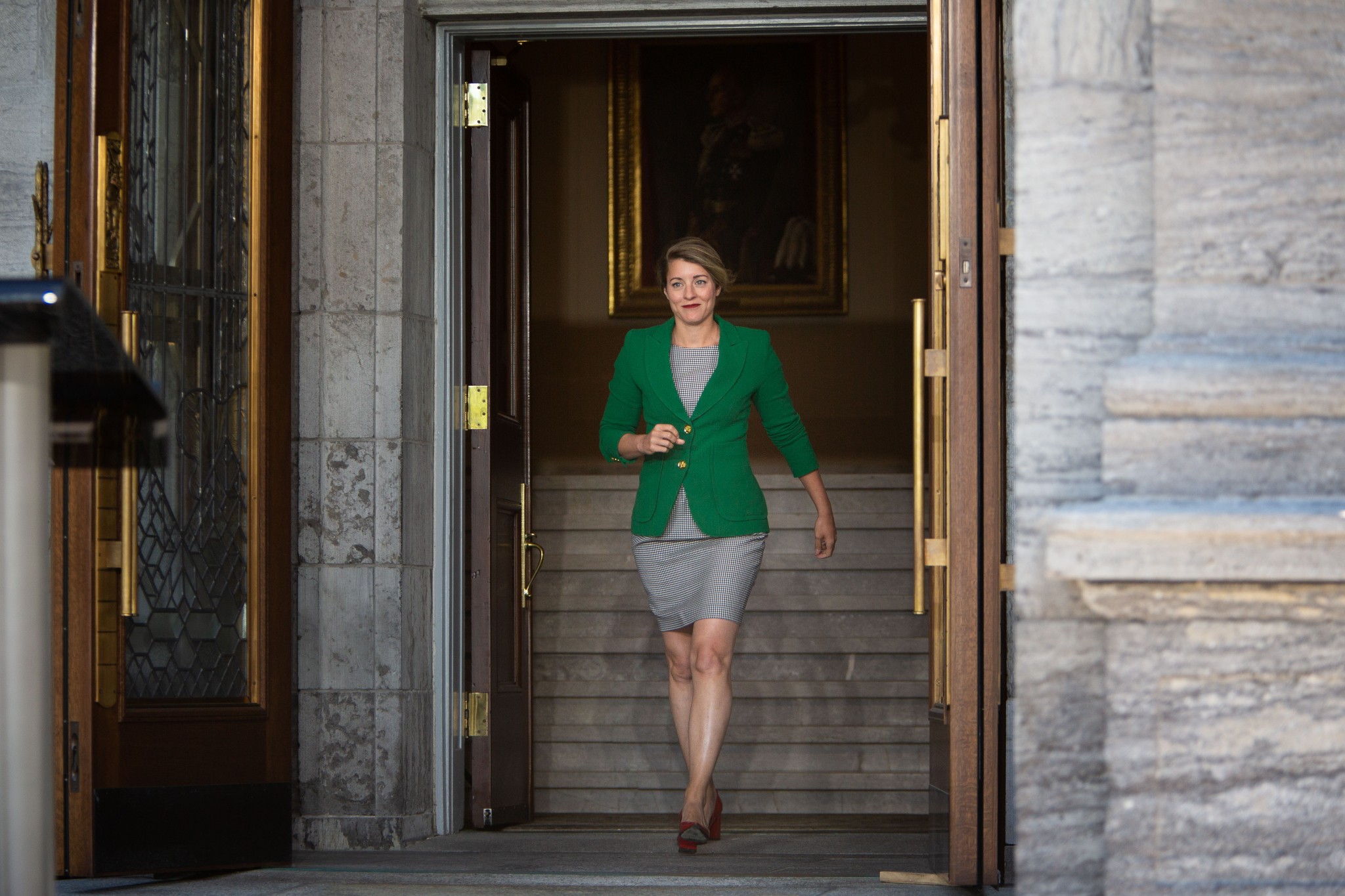 Mélanie Joly, minister of tourism, official languages and La Francophonie, exits Rideau Hall on July 18, 2018. She is the chair of the government's Cabinet Committee on the Environment and Clean Growth. Photo by Alex Tétreault
Previous story
Next story

Prime Minister Justin Trudeau has removed “climate change” from the name of a powerful committee of ministers but says the government is no less committed to the issue.

Trudeau also launched a new cabinet committee devoted entirely to Indigenous reconciliation, as part of a cabinet restructuring that was unveiled Tuesday.

The renaming of the Environment, Climate Change and Energy cabinet committee to Environment and Clean Growth reflects the government's commitment to addressing climate change through growing the economy, Trudeau's office said.

It also noted the committee's mandate remains the same and still includes the consideration of climate change, and the federal environment minister still counts herself a member.

The moves are among a host of changes made Aug. 28 to Canada’s governance, in the wake of last month's cabinet shuffle and in the lead-up to the 2019 election.

New mandate letters for rookie ministers were announced, too, with Bill Blair, the new minister in charge of border security and organized crime, ordered to lead conversations with the United States on the Safe Third Country Agreement governing asylum seekers.

Cabinet committees are influential, often-overlooked gatherings where ministers decide on how to push the government’s agenda forward. They are also an opportunity for ministers to get briefed on the latest tricky issues affecting their files.

Discussions are hidden from the public, ostensibly so ministers can speak frankly. Briefing notes and other cabinet committee records are exempted from freedom of information requests.

Eleanore Catenaro, press secretary in Trudeau's office, said the committee name change was meant to tie together the environment and the economy.

“We see clean growth as how you address climate change, and it underscores the immense economic opportunity and job growth for Canadians, when we invest in climate action and protect the environment," said Catenaro.

Dale Marshall, national program manager at Environmental Defence, said he wasn't as worried about the name change as much as climate action.

"What matters is policy," said Marshall, "how rigorously and how quickly will climate policies be implemented."

While Environment and Climate Change Minister Catherine McKenna stays in the committee, Crown-Indigenous Relations Minister Carolyn Bennett was dropped, but will go to a new Cabinet Committee on Reconciliation, along with Indigenous Services Minister Jane Philpott.

Catenaro said all ministers are "committed to a renewed relationship with Indigenous peoples," and tasked with making sure, when it’s relevant to the minister, that Indigenous Canadians are "better reflected in positions of leadership on their files."

She also noted that Fisheries Minister Jonathan Wilkinson, who must deal with Indigenous issues, has replaced Dominic LeBlanc, who has moved to intergovernmental affairs, on the Environment and Clean Growth committee.

The committee has been expanded to nine members from six, plus a chair and vice-chair, and the ministers attending the committee have changed.

Science and Sport Minister Kirsty Duncan, who holds a doctorate in geography and contributed to the Intergovernmental Panel on Climate Change, had been the committee’s vice chair, but is now a member, with Agriculture Minister Lawrence MacAulay taking her spot.

Mélanie Joly still chairs the committee, although her ministerial role changed this summer from heritage to tourism. Amarjeet Sohi, who switched from infrastructure to natural resources, is also still a committee member.

The committee's mandate is unchanged, and reads that the committee will consider “issues concerning sustainable development, the stewardship of Canada’s natural resources, environment, energy, water and Canada’s contribution to addressing climate change.”

The government said the Cabinet Committee on Reconciliation will “build on the work” that was being previously done by a group of ministers who Trudeau had ordered to review federal laws and policies related to Indigenous relationships with the nation of Canada, Canada’s government and the Crown.

That group, first announced in February 2017, announced earlier this year that it was moving forward with creating a legal framework for the recognition and implementation of Indigenous rights.

The committee's mandate is broad, saying it "examines initiatives designed to strengthen the relationship with Indigenous Canadians."

The agreement says asylum seekers must make refugee claims in the first "safe" country in which they arrive — meaning those who claim refugee status at an official border crossing are automatically sent to the United States instead.

The agreement does not cover irregular asylum seekers — those entering Canada at unofficial points, most notably in Quebec — what the Conservative Party calls a "loophole."

Article 31 of the UN Refugee Convention, to which Canada is a party, says asylum seekers can’t have penalties imposed on them for the way they enter a country, if they present themselves promptly to authorities and show "good cause" for their presence.

Blair’s work will be supported by the departments of Public Safety, Immigration and Foreign Affairs, the letter says. Blair will report to Public Safety.

"The letter contains no formal commitment to renegotiate the Safe Third Country Agreement in such a way that would close the loophole that facilitates the Roxham Road crossing in Quebec. This is because Justin Trudeau has no intention of doing so."

Mr. Trudeau will say or do

Mr. Trudeau will say or do whatever is deemed necessary to secure a second term. Promises will flow from his lips. Will we be taken in again? Justin is banking on it.

This will be the last

This will be the last election by first past the post! No change
We will ban all handguns! Yeah right.
Climate change must be addressed. Build pipelines!
Justin can't stop spinning and lying.

"We can't leave it in the ground," Justin Trudeau - Why not?

"Environment and Clean Growth" is code for the idea that we should increase greenhouse gases through more fracking and oil sands activities in order to have enough money to transition to renewable energy. This is ridiculous, and simply an excuse for industry to keep increasing pollution. Canadians need to stand up and refuse to go along with this blind race to an irredeemable future.