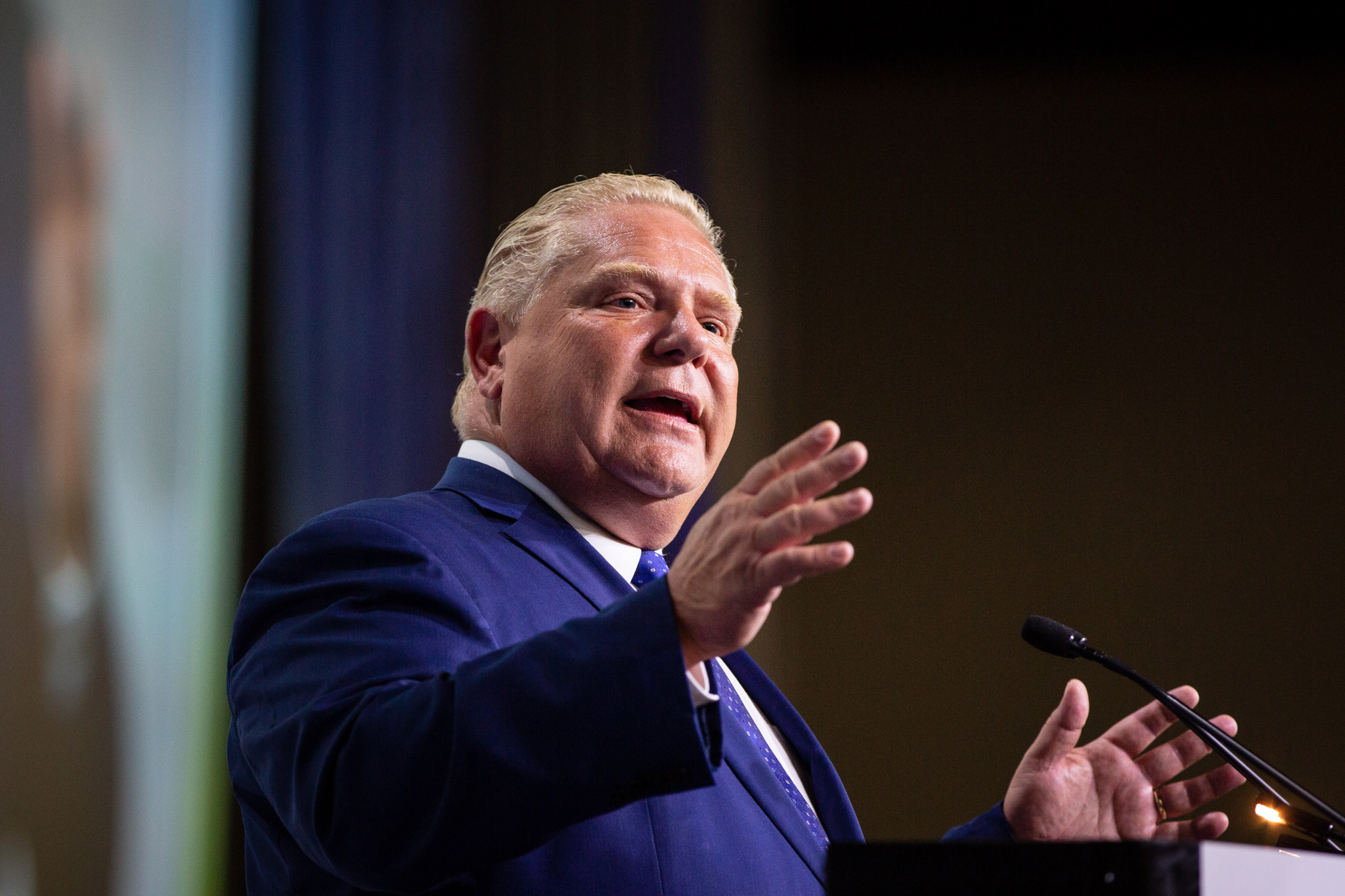 Ontario Premier Doug Ford speaks to the Association of Municipalities of Ontario in Ottawa on Aug. 20, 2018. Photo by Alex Tétreault
Previous story
Next story

Ontario Premier Doug Ford tweeted a selfie of himself with Alberta Opposition leader Jason Kenney criticizing a tax on pollution, as his provincial government faced accusations from federal Liberals of trying to stop some public servants from speaking about climate change.

The accusations, originating from a Toronto website, were later denied by both the premier's office and the environment minister — the latter issuing his own tweet that noted the government of Canada's most populous province took the issue of climate change seriously.

On Thursday, the website, BlogTO, reported it had been leaked a screenshot of an internal email instructing Ontario Parks staff that, “per premier’s office direction, we are not allowed to mention climate change in social media content at this time.”

BlogTO reported Friday in a subsequent story that "multiple staffers had confirmed the veracity of the email screenshot."

This report also mentioned that a director from the communications branch of the Ontario Ministry of Natural Resources and Forestry had also sent an email indicating that Ford's office was "reviewing and approving all social media content from all ministry channels."

National Observer has not been able to independently review the emails described by BlogTO. Ford’s office denied giving any such instructions to public servants and an internal memo from senior public servants indicated that the government had launched an internal investigation to determine why false information was circulating and strengthen security procedures, The Canadian Press reported on Friday.

An Ontario Parks employee who wishes to remain anonymous sent us this: https://t.co/3f8NBkT6m1 #onpoli #climatechange pic.twitter.com/hMtGui8pV3

The website said that the first email came from an Ontario Parks employee who wished to remain anonymous. It is shown to be sent by social media coordinator Anne MacLachlan.

When reached for comment by National Observer, MacLachlan said she was unable to comment and directed questions to the natural resources ministry.

Lisa Sarracini, the MNRF communications director who BlogTO reported sent an email indicating that Ford's office "will not be approving any posts mentioning climate change at this time," had not yet responded to voicemail by publication.

National Observer also reached out to five public servants who supposedly received one of the emails, but did not immediately get a response.

Federal Environment and Climate Change Minister Catherine McKenna used the reports on BlogTO to publicly criticize the Ford government, noting on Twitter that the government "appears to be muzzling Ontario Parks by banning (the) words 'climate change.'"

"Time to focus on climate action," she added. "We have a plan; Ontario has no plan."

In an interview, Schreiner called the BlogTO reports "appalling."

But he said he has yet to hear back from Phillips, and hasn't been able to confirm for himself if the claims that the Ford government is clamping down on climate-related speech online are true.

“It's chilling to think that in 2018, when you literally have forest fires in B.C. and Ontario (and) across the country costing human life, the environment, hundreds of millions of dollars...that you have a government that would be muzzling scientists and telling public servants that you're not allowed to speak truth,” said Schreiner. “It’s shocking actually.”

Phillips later replied to Schreiner's letter confirming that no instructions had been given by the premier's office to restrict the use of the term "climate change" on the government's social media accounts. He also noted that the government had tabled legislation that, if adopted, would require him to introduce a new climate change plan, set targets and report back on progress.

"Our government takes climate change very seriously and we understand the importance of taking steps to ensure we protect our environment," Phillips wrote in the letter, sent on Friday and shared on his Twitter account. "We care a great deal about the environment and remain committed to take action to encourage lower emissions."

What a wonderful time in the beautiful city of Halifax capped off by a breakfast with future Premier of Alberta @jkenney. Looking forward to fighting the job killing carbon tax with you. #CPC18 pic.twitter.com/l452f4hti7

This would not be the first time officials inside a government have sent instructions to discourage a discussion about climate change by public servants and the population.

South of the border, the Trump administration systematically erased the term “climate change” from government-run websites starting in 2017.

The Environmental Data and Governance Initiative, a U.S.-based watchdog group funded by the non-profit Public Lab and other foundation grants, identified in January how the Environmental Protection Agency, the Department of State, Department of Energy and other U.S. agencies removed or reduced the prominence of "climate change" from websites and documents.

In Canada, the government of former prime minister Stephen Harper performed a similar feat when it muzzled its scientists from talking with journalists, which led to media coverage of climate science dropping precipitously.

A federal investigation later found the Harper government had violated its own transparency rules by muzzling federal scientists. Under the Trudeau government, Canada has since moved to introduce new rules to shield scientists and researchers from political interference and enshrine evidence-based decision-making in government.

Ford said during the final leadership debate that he believes in “man-made global warming.” But he ran his campaign largely on the promise to abandon Ontario’s price on carbon pollution, because in his estimation, it did “absolutely nothing to help the environment.”

Many economists say there is ample empirical evidence that carbon pricing works and would be cheaper than the cost of doing nothing and allowing climate change to accelerate unabated. University of Alberta energy and environmental economist Andrew Leach cites evidence showing British Columbia’s emissions would be five to 15 per cent higher without the imposition of a carbon tax in that province a decade ago.

Yet Ford repeated the false idea that carbon taxes are completely useless, when giving a speech at the Conservative convention in Halifax on Thursday. Ford brought the crowd to a standing ovation when he mentioned fighting Trudeau on his plans to make polluters pay.

"We will hold their feet to the fire and make them accountable for the bad, terrible policies that we've seen over the years. And we will start by stopping their punishing carbon tax,” Ford said to the raucous crowd. "It is absolutely the worst tax ever created, a tax that does nothing for the environment.”

Kenney, who leads the United Conservative Party in Alberta, has also criticized carbon pricing, saying he would scrap a provincial carbon tax system introduced by the NDP government of Premier Rachel Notley.

The federal government has said it will introduce a backstop in 2019 to impose taxes on jurisdictions that fail to meet a national standard.

Editor's note: This article was updated at 9:56 p.m. ET on Aug. 24, 2018 with new comments from Ontario Environment Minister Rod Phillips.

Federal Liberals are the

Federal Liberals are the climate deniers. Pre 2015 election..."We will wean Canada off of non renewables." Justin Trudeau
After the election? "We can't leave it in the ground." Justin Trudeau