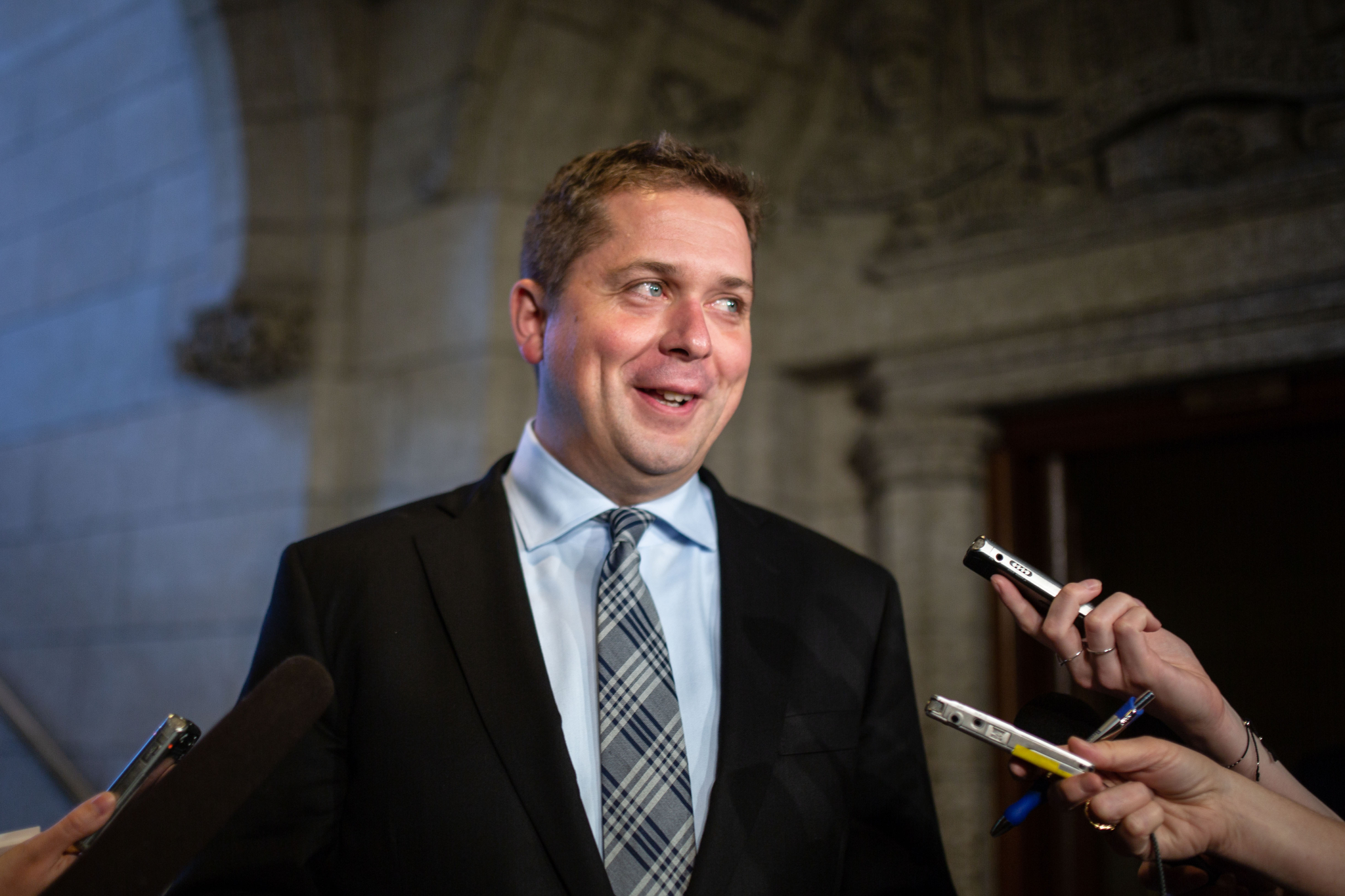 Conservative Party Leader Andrew Scheer speaks to reporters outside the House of Commons on June 19, 2018. Photo by Alex Tétreault
Previous story
Next story

The leader of Canada’s official Opposition party on Friday appeared to walk back an erroneous tweet that describes oil as the cleanest form of energy available.

Andrew Scheer was reacting to the Federal Court of Appeal ruling that quashed the federal government’s approval of the Trans Mountain expansion project, when he tweeted a comment about Prime Minister Justin Trudeau’s energy policy.

“What a total mess Justin Trudeau has made,” Scheer tweeted Thursday, linking to a news story about the ruling. “Canadians are paying, literally, for his utter failure to champion the cleanest, most ethical, environmentally-friendly energy in the world. This has to change.”

If built, the Trans Mountain pipeline expansion would be used to transport up to 890,000 barrels of petroleum products like bitumen, a tar-like heavy oil, from Alberta’s oilpatch to the west coast.

Scheer’s tweet and the context of his link to the ruling suggested he was comparing those petroleum products, which are fossil fuels, to all other forms of energy, including non-polluting sources like wind and solar.

What the opposition leader meant to describe was a comparison between Canadian oil and other forms of oil.

“In the tweet, Mr. Scheer is referring to the excellent ethical and environmental standards of oil extracted in Canada in comparison with oil extracted in many other parts of the world,” Schow said in an emailed response to National Observer‘s questions.

“As Canadians, we should be proud of our energy sector and the example it sets for the rest of the world.”

'Canada is on fire'

“Getting into nuances around whether or not oil is ethical, if it’s sourced from a G8 economy versus another economy, doesn't even make sense in this time that we’re living in,” said Thomas-Müller.

“There is nothing clean, ethical or environmentally-friendly about crude from the oil sands. What a preposterous statement,” wrote Mason.

Scheer shot back, saying “it’s very troubling that a columnist at a national newspaper could be so wrong about Canadian oil.”

“By every possible metric, our oil is the best in the world. If this story was told more, perhaps we wouldn’t be where we are today,” he said.

Scheer’s “story” was told in great detail by the government of former Conservative prime minister Stephen Harper, which budgeted tens of millions of public dollars for an advertising campaign promoting the Canadian oil industry in the U.S., Asia and Europe.

The Harper government also deployed its diplomats to push the pro-oil message to Fortune 500 companies in the United States and counter an environmental advocacy campaign that highlighted the rapidly-expanding carbon pollution from the oil and gas industry.

The rich deposits of heavy oil beneath Canada’s boreal forest, particularly in the northern part of Alberta, make up the world's third-largest reserves of crude oil and are Canada's fastest-growing source of greenhouse gas emissions.

This carbon pollution is released into the air and collects in the Earth’s atmosphere, warming the planet and causing climate change, which is making extreme weather like hurricanes, droughts, floods, wildfires and heat waves more intense and more frequent.

Governments around the world expect fossil fuels like coal, oil and natural gas — which create this carbon pollution when they’re used by things like cars, planes, factories, power plants and other facilities — will need to be replaced with cleaner forms of energy like solar, wind, geothermal and biomass.

The International Energy Agency has concluded, based on peer-reviewed scientific evidence, that no more than one-third of proven reserves of fossil fuels can be consumed prior to 2050, to avoid a climate change tipping point that could cause irreversible damage to the planet's ecosystems.

Trust Scheer to say something stupid like this but then he is doing his best to emulate Trump. I don't know what it is with these Cons/Reps that they must do their best to look like as idiots all the time. He has no solutions to offer only criticism, but that doesn't stop him from shooting off his mouth at every opportunity.

This silliness about 'ethical

This silliness about 'ethical oil' is straight out of the Ezra Levant, Rebel Media talking points play book...but seriously Scheer: things can't be ethical...only people can be ethical. Inanimate objects, industrialized processes, infrastructure pipedreams, in situ use of water to steam free gooey tar, bitumen, dilbit and everything in between is all inanimate stuff.

And the inane claim that it is ethical stuff if STUFF AND NONSENSE. Goddess help us if we elect someone who misses this necessary distinction. Because I suspect if you think oil is ethical your own sense of ethics is undeveloped.

it seemst that in the