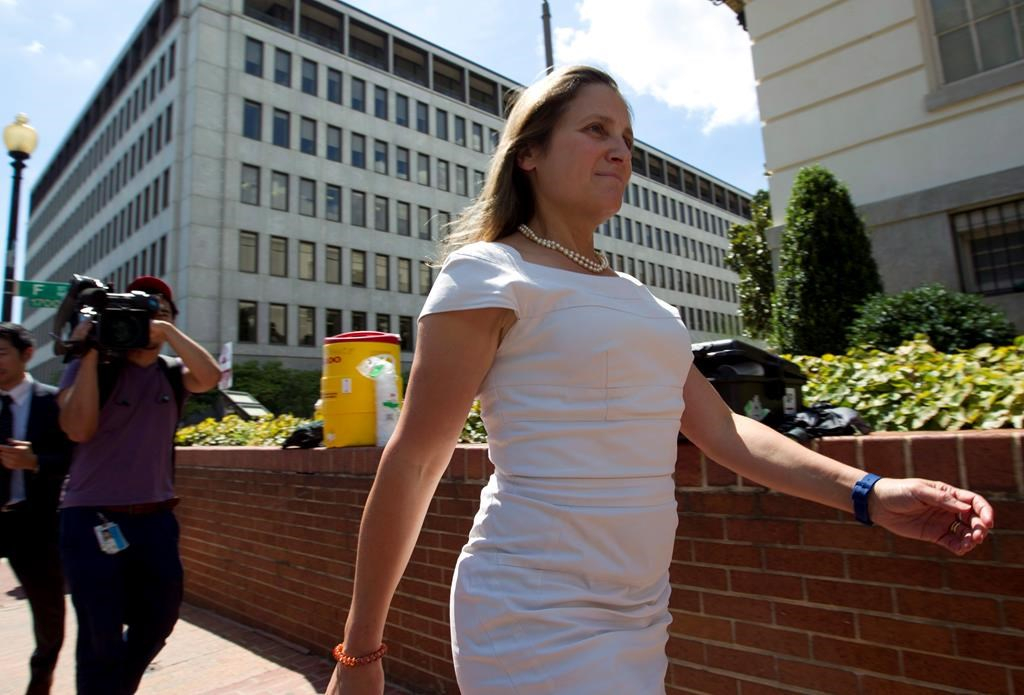 Chrystia Freeland arrives for trade talks at the Office of the United States Trade Representative, in Washington, on Friday, Aug. 31, 2018. File photo by The Associated Press/Jose Luis Magana
Previous story
Next story

Prime Minister Justin Trudeau held firm Tuesday to the lines drawn in sand three decades ago as the latest push to preserve a North American Free Trade Agreement — one that still includes Canada — was poised to unfold.

Trudeau said Canadians will not sign onto a deal that does not include a dispute resolution mechanism and exemptions for cultural industries — two positions that were among the pillars of the original 1988 Canada-U.S. free trade deal.

The prime minister staked out Canada's ground as a fresh Oct. 1 deadline and the encroaching American midterm elections cast a shadow over Wednesday's resumption of negotiations in Washington. Foreign Affairs Minister Chrystia Freeland is to resume talks with U.S. trade czar Robert Lighthizer, whom she has praised as a "good faith" negotiator in the face of President Donald Trump's Twitter barrages.

"We've said from the very beginning that we need a dispute resolution mechanism like Chapter 19 and we will hold firm on that," Trudeau told reporters in Vancouver.

Chapter 19 allows for independent panels to resolve disputes between companies. The Trump administration views it as an infringement of U.S. sovereignty.

It was the hill that former Progressive Conservative prime minister Brian Mulroney was willing to die on during the final hours of the original Canada-U.S. free trade deal in 1988. After consulting with Mulroney over the weekend, Trudeau made clear he shares that view.

The prime minister also said his government won't sign an updated free trade accord with the U.S. and Mexico if the deal doesn't continue exemptions for Canada's cultural industries, which aims to protect Canada's publishing and broadcast industries.

That too was entrenched in the original Canada-U.S. free trade deal that preceded NAFTA. Giving up the exemptions would be tantamount to giving up Canadian sovereignty and identity, Trudeau said.

"It is inconceivable to Canadians that an American network might buy Canadian media affiliates, whether it's newspapers or TV stations or TV networks," he said.

"So we've made it very clear that defending that cultural exemption is something that is fundamental to Canadians."

Canada and the U.S. need to present a text to the U.S. Congress by Oct. 1 in order to join the deal the Trump administration signed with Mexico last week, trade analysts say.

The overall goal is to reach a deal by Dec. 1 so Congress can give its approval to a new NAFTA before Mexico's new president takes office.

Otherwise, Trump is threatening to move ahead on a deal with Mexico that excludes Canada.

She said that's because a recent ruling by the court emphasized that it did not have jurisdiction under the Special Import Measures Act to change so-called "dumping margins."

The two sides broke off talks Friday as Trump formally notified Congress of the deal with Mexico, saying Canada might join later.

But in recent days he has become more aggressive towards Canada on Twitter — bluster that some trade experts are dismissing as a predictable negotiating tactic.

On Saturday, Trump said there is "no political necessity" to keep Canada in NAFTA and he warned Congress not to interfere or he would kill the pact.

U.S. business and labour leaders have warned Trump not to dump Canada from NAFTA.

Trump's "bombastic rhetoric" ought to be ignored because he has no power to override the opposition in Congress to exclude Canada, and he needs 60-days notice to terminate NAFTA, said Derek Holt, vice-president and head of capital markets at Scotiabank Global Economics.

Holt wrote in a Tuesday note that Congress will not allow Trump "to skirt past Canada in NAFTA negotiations given the long line-ups of members of Congress — Democrats and Republicans — saying they will not support a bilateral deal" with Mexico.

With the U.S. midterms eight weeks away, and Trump facing pressure to maintain the Republican hold on the House and Senate, the influence of Congress will permeate the resumption of Wednesday's talks.

Congress must approve any rewrite of the deal and could refuse to endorse an agreement that excludes Canada. But that's not set in stone, said Dan Ujczo, an Ohio-based trade lawyer with Dickinson Wright.

"Congress will support Canada throughout September," he said. "After that, Congress will have a tough choice to make in terms of going forward with a good deal with Mexico, opening Mexico's agricultural markets as we brace for the long haul with China."

At a Liberal party fundraiser in Surrey, B.C., Tuesday night, Trudeau avoided trade talk, instead outlining the approach the Liberal party will take in the coming election.

Speaking to dozens of supporters at a posh banquet hall, he said he believes his party won the 2015 election by putting out a message of positivity. He also condemned the rise of what he called "aggressive nationalism.

"We see there is a tendency to exploit short term emotions as a way of getting that capacity to govern. But one of the things that we know is that once you’ve gone and divided citizens into small groups ... it actually hurts you capacity to govern for the good of all," said Trudeau.

He also noted the seven-year sentence handed down to two Reuters reporters in Myanmar and pointed to reporters gathered at the fundraiser, saying the Liberal party believes it's important to be transparent about the messages it sends to its donors.

"I want everyone to reflect on the fact that it is absolutely essential in any democracy to have a strong, empowered independent media," he said.

— with files from Amy Smart in Vancouver

Trump warns Congress not to 'interfere' with NAFTA negotiations

Tories defend criticism of Liberals on NAFTA, and say they want a deal too