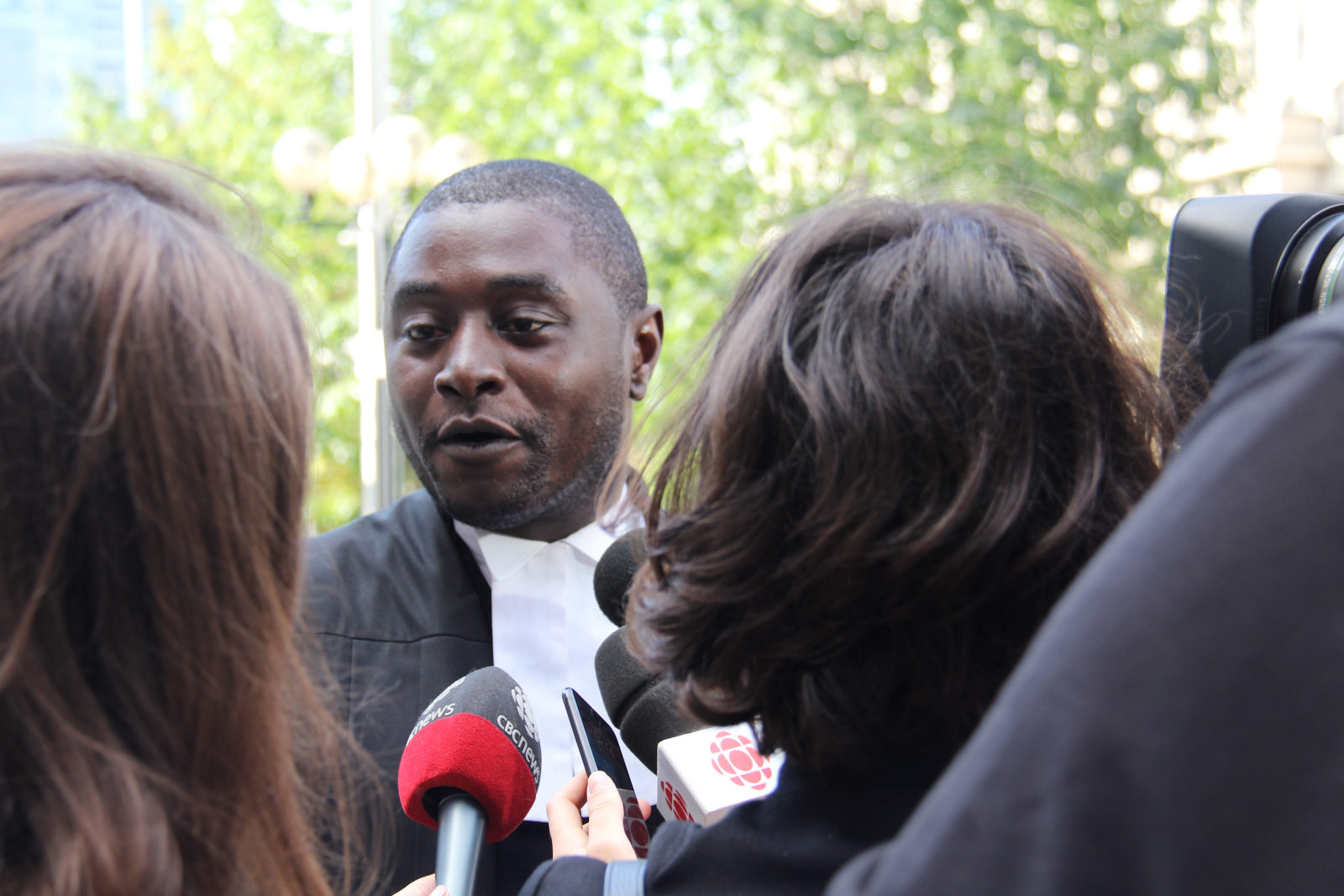 Ontario Superior Court Justice Edward Belobaba is expected to make a critical decision for the future of democracy in Toronto by Monday.

The ruling will decide whether Ontario Premier Doug Ford's government had the authority to enforce sweeping changes to the size and structure of city council, only a few weeks before Toronto residents go to the polls in an Oct. 22 election.

Ford's Tories rushed to adopt Bill 5 — also known as the Better Local Government Act — at Queen's Park, right before the Ontario legislature adjourned for the summer on Aug. 14. They changed the normal rules of the legislature, to limit debate and allow them to adopt it only a few weeks after it was introduced.

Ford had promised to reduce the size of government to save taxpayers money during the 2018 Ontario provincial election campaign, but his party never mentioned that it was musing about this legislation, which unilaterally reduces the size of Toronto's city council from 47 members to 25.

A fleet of lawyers and intervenors made their case in favour and against the bill before Belobaba on Aug. 31, with enough spectators in the room to fill one of the Ontario Superior Court's largest hearing rooms.

A long day in court

After the bill’s passage, a handful of parties applied for intervenor status, the first of which was Rocco Achampong, who had taken a break from his law practice to run as a municipal candidate in Ward 13.

He was swiftly followed by a handful of others including the City of Toronto, and candidates Chris Moise, Jennifer Hollett, and Prabha Khosla.

The candidates argue that the legislation — which received royal assent the day nominations closed — interferes dramatically in an election already underway and undermines the potential for better representation for women, LGBTQ+ residents and racialized communities in local government.

A coalition of lawyers fighting the province on their behalf made use of section 2B in the Charter of Rights and Freedoms to try and convince the judge that the province was violating fundamental rights through the timing of its actions. This section of the Charter says that freedom of thought, belief, opinion and expression, including freedom of the press and other media of communication are fundamental rights under Canada's Constitution..

Heather Ann McConnell, one of the lawyers at the firm representing a spate of intervenors including WomenWinTO, argued that the bill would “not only (freeze) access, it further disadvantages them.”

The ward structure, to be changed by the legislation, was the result of an $800,000 review process, the court heard, undertook while the late mayor Rob Ford and his brother, now Premier Ford, were on council and in support.

“Voter parity was not the motive,” said Achampong, of the province’s legal argument that the 25-ward system would achieve a preferable type of representation.

After reading a press release from Premier Ford outlining his motivations for #Bill5, @Rocco4Toronto calls into question the Province’s lawyer’s argument of voter parity as a reason for the Premier moving to 25 wards.

Lawyers challenging the law made note that there is no evidence to support that a 25-member council would be more effective than a 47-member one, nor of the premier’s estimate of $25 million in savings.

They also suggested during the proceedings that the premier may not have asked for legal advice before tabling the bill.

The city is a creation of the province under the City of Toronto Act, one that it could theoretically “destroy,” noted Belobaba, assuming it doesn’t infringe on Charter rights.

“When governments legislate, sometimes there are winners and losers,” said Robin Basu, representing the province, who also said that representation is a policy choice, rather than a constitutional imperative.

Basu, along with the City of Toronto’s lawyers, declined to comment for this story.

Justice Belobaba acknowledged that after he renders his decision, the unfavoured party will likely appeal.

Each is concerned about what legal precedent could be set in the conclusion of such an unprecedented legal battle.

The Canadian Taxpayer Federation (CTF), an intervenor on the province’s side, applied for status after the city told the court it was battling its case based on the notion of unwritten constitutional principles.

These unwritten principles of "democracy and rule of law," argued the city's lawyers in their factum, are factors that should limit the province's powers, "especially in the context of legislation that purports to arbitrarily interfere with an ongoing election and thereby reduce electoral fairness."

But the federation says it doesn't make sense to argue a case based on an unwritten principle.

“From our perspective, to strike down validly enacted legislation on the basis of an unwritten principle, that's something that's never been done and doing it on the basis of the principal of democracy sort of flies in the face that this was a democratically elected government that was elected with a mandate to save taxpayer money,” Christine Van Geyn, Ontario director at the CTF, told National Observer.

She explained that the federation is intervening in the case because it has a mandate to advocate for smaller government and reducing taxpayer costs — two objectives she says Bill 5 clearly serves.

“The legislation is fully within the scope of provincial powers to enact, and we had concerns that relying on the unwritten principal to undo something that a democratically elected government had been voted in to do was going to be setting a bad constitutional precedent.”

The province’s opponents are also concerned about what it will mean for municipalities if the province can alter their democracies on a whim.

“It’s actually kind of ironic that this government is holding the banner of free speech on university campuses because from a Charter perspective, an attack on a democratic campaign and an attack on your effective right to vote is a very fundamental attack on your rights to political expression,” Gavin Magrath, who is representing Achampong, told National Observer.

As a result, explains Magrath, if the province hasn’t persuaded Belobaba with its arguments, it’s going to have an uphill battle in an appeal.

If Justice Belobaba decides against the province on the merits of the Charter challenge and it chooses to appeal, Ontario’s lawyers are going to have to prove that the province had a pressing and substantial objective in passing Bill 5, Magrath explained, one that would make the law “a reasonable response that minimally impairs democratic rights.”

“It looks to me that that will be absolutely impossible,” he said.

He noted, as did at least one of his peers in the courtroom, that no other municipality has the proportion of representatives the province is angling for, and that the premier has capriciously singled out one of its largest cities for personal reasons.

If the province’s power goes “untrammelled,” he said, there’s nothing to stop it from downloading the legislation into other local governments.

Craig Scott, a professor of law at Osgoode Hall Law School of York University and a former Member of Parliament for Toronto-Danforth, believes that if the judge allows the bill to stand, “It’s a blow and it basically will open the gateways to many possible future pieces of (legislation) … where a premier can act as dictatorially as he or she wants and interrupt any number of things that are fundamental to our collective life in a democratic or rates-based way and get away with it.

“I think it's a danger,” said Scott, who has been observing the proceedings.

If, however, the justice rules against the bill, Scott believes he will be “standing up and doing the job that we need judges to do, which is not to be scared of saying that … democracy is tied to the rule of law,” and not on any one leader or government.

In that case, Scott believes, “it will be a brave decision but an important one.”

What comes next is ‘definitely not well-travelled territory’

The judge's decision is expected Monday, a phase in this process speedily expedited in light of the amended deadline for city council candidates to register on Sept. 14.

While the parties have yet to form the basis of their appeals without details of Justice Belobaba’s ruling, some are preparing for what action they can take if the law stays on the books.

Philip Tunley, a lawyer who has been closely monitoring the city’s proceedings, says he has been discussing with candidates the possibility of a class action lawsuit if Bill 5 is upheld by the courts.

Candidates, he noted, have quit their jobs to accommodate their campaigns, worked to raise funds and registered by a former deadline in compliance with the existing rules.

The sudden upheaval may make them eligible for damages, says Tunley.

“It’s definitely not well-travelled territory,” he explained, adding that “these would be novel claims but there’s authority and close analogies that would support an action. The real issue is what the province would do in response to that. The law is pretty clear that the province can retroactively extinguish claims that are made, so the political question is whether Premier Ford and his government would do that.”

Hmm, I read the articles on

Hmm, I read the articles on this in the wrong order. After reading the argumments for and against I am moved to suggest that neither side has made mention of Canadian historical precedents. The Charter was not created out of someone's flight of fancy but is based not only on centuries of Common law but takes account of Quebec's Napoleonic code as well. Moving forward in time we have the heroic work of Baldwin and Lafontaine and their reform coalition to bring true "representation and responsibility" to Canadian forms of governance - making us one of the world's longest surviving uninterruped democracies. Something we don't acknowledge often enough. From Magna Carta to now, there are powerful principles - perhaps not written in law but evidenced in history - such as the "freedom of the city" wherein a serf who escaped from ties to a feudal overlord who managed to live free in a city for a year (Usuallly as an apprentice) earned the right to permanent freedom. This extraordinary power granted to cities by feudal politics acknowledged the value and power cities wielded in the kingdom. As far as I know no one now is disputing the essential values of cities as economic powers. What higher levels of governance do however, is frequently try to interfere in their workings - to the fury and frustrations of generations of mayors and councils

Municipalities may be the "creatures" of the provinces but that is merely a legal convenience to establish some chain of hierarchy. Historically, cities were the first form of organized and codified human settlement. They usually arose as the seats of government, kings, tyrants, councils, "gods on earth" reigned in cities which supported their power. Then you have the city states - which comes first in that description? And eventually we aspired to "Nation states".
Cities or municipalities are the democratic, representative and responsiple entities closest to the people and should be the governance that best serves them, daily, where they live and work. Overlords should be not only respectful of municipalities but cautious in their manipulations. Many rulers have been undone by the revolts of their city inhabitants.

What is it about democracy,

What is it about democracy, that conservatives don't understand?

Once again, our courts define

Once again, our courts define the rule of law. Thank all the gods that be, for an independent judiciary. A bad poem I know, but its something to skip rope to.

the evil that men do, lives

the evil that men do, lives after them.