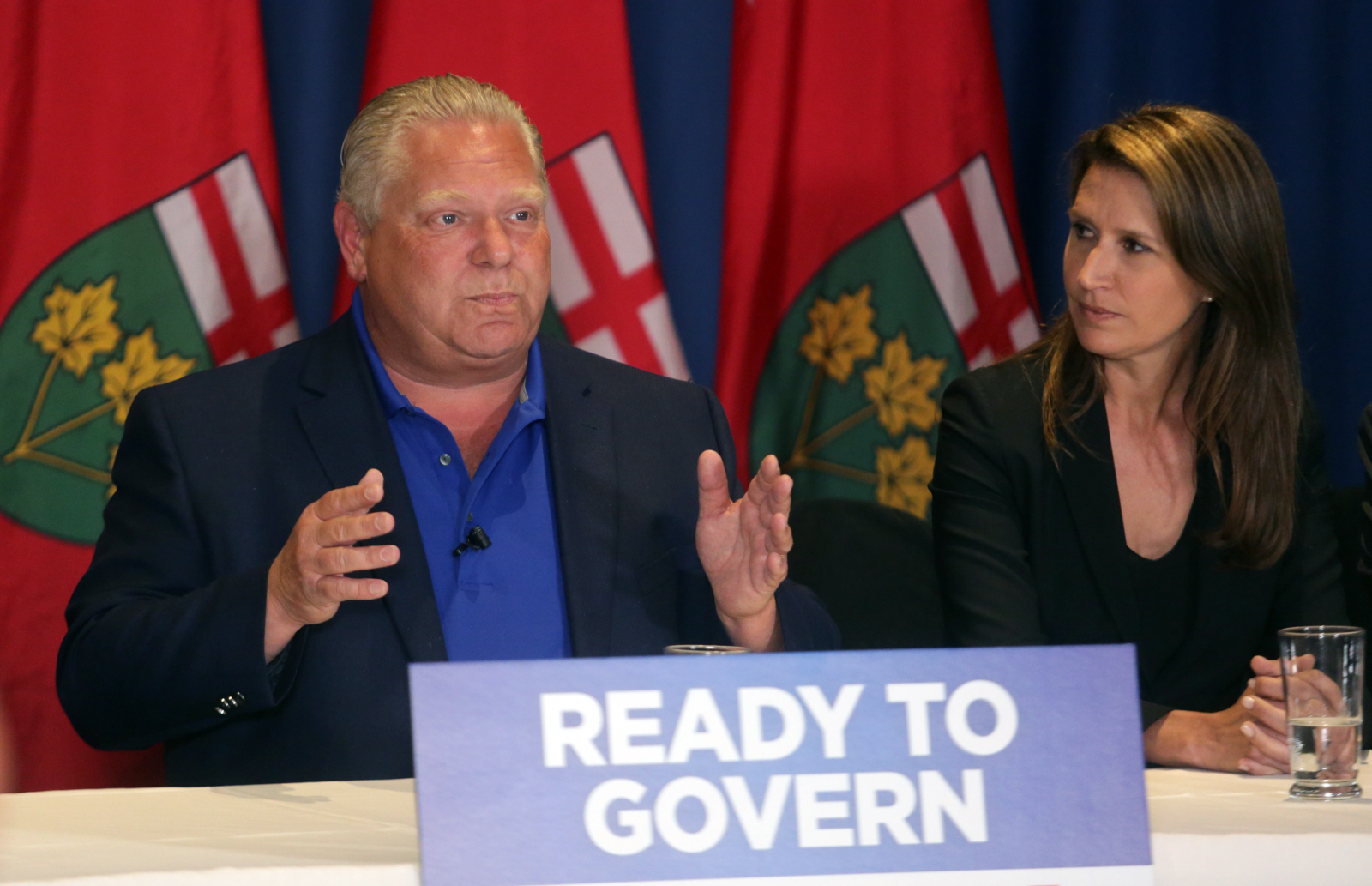 Ontario's attorney general was conspicuously absent as her premier told reporters on Monday afternoon that he planned to suspend constitutional rights in Toronto following a stunning rebuke from the courts.

But by the end of the day, Caroline Mulroney used a short social media message to back Premier Doug Ford’s plan.

The premier was responding to a court decision which found that his government's Bill 5, legislation designed to reduce the number of seats at city hall in the middle of a municipal election campaign, violated the Charter of Rights and Freedoms in the Canadian Constitution.

Ford said he would reconvene the Ontario legislature on Wednesday for an emergency session to adopt a new law, while using a rarely-used section of the Constitution, referred to as the notwithstanding clause — Section 33 of the Charter — to suspend the court's decision.

In a tweet, Mulroney justified the use of the notwithstanding clause, stating "s92 of the Constitution makes it clear that the Province has exclusive jurisdiction over municipalities. It’s why we’re appealing the ruling and will be introducing legislation to invoke s33 to deliver on our commitment of smaller, more effective government."

s92 of the Constitution makes it clear that the Province has exclusive jurisdiction over municipalities. It’s why we’re appealing the ruling and will be introducing legislation to invoke s33 to deliver on our commitment of smaller, more effective government. #onpoli #forthepeople https://t.co/Q0Kk4QX6Vk

Neither Mulroney’s nor the premier's office responded to questions about why she was absent from the news conference held by Ford and Municipal Affairs Minister Steve Clark.

Mulroney's absence and Ford's reaction to the ruling prompted questions from reporters about whether his Progressive Conservative caucus was backing his position.

Ford, who showed up for the news conference nearly two hours behind schedule, said the caucus was "1,000 per cent" behind him.

"I was elected," Ford told reporters, making clear that he had a mandate to enact this legislation and reduce government size. "The judge was appointed," he added. "Only the people will be judge and jury."

Ford’s intention to use the notwithstanding clause — the first time it has ever been invoked in Ontario — prompted a range of responses, with many denouncing the decision.

"Canadians expect all orders of government to uphold their rights and freedoms as guaranteed by the charter and respect the rule of law," said federal Intergovernmental Affairs Minister Dominic LeBlanc.

"The rights and freedoms guaranteed by the Charter are of utmost importance in our society and our government will always stand up to defend them. The notwithstanding clause is an extraordinary part of the Constitution that should only be used in the most exceptional cases, after serious and sober consideration. Today's announcement is disappointing, and Ontarians will ultimately judge the actions of their provincial government. What we'd really like to see is the new Ontario government focusing on working with us to create good, middle class jobs in Toronto and across the province."

"We do not have an elected dictatorship in this province, or in this country," he told National Observer. "We have a government that is elected and is then required to follow the rules of the game."

Rae told National Observer Justice Edward Belobaba’s ruling on Bill 5 was “very sound,” in recognizing the violation of Charter of Rights and Freedoms by the legislation. "I think the clear message from the judge is the power of any government is not unlimited," he said. "It's limited by its commitment to proceed fairly and in full respect of the political rights that are guaranteed by the Charter.

"The Charter does not create rights," Rae said. "The Charter recognizes rights that already exist. I think that argument is going to be very important as we go forward, because I’m not sure that the government can in fact use the notwithstanding clause to limit political rights in this way because those political rights precede the Charter."

Stockwell Day is 'not alarmed'

Former federal Conservative cabinet minister Stockwell Day is "not alarmed" by the Ford government's use of the rare clause. Day was present in the conversations between the provinces and Pierre Trudeau's governments, out of which the notwithstanding clause was borne. In its original intent, he explained, the clause was requested as a temporary "out" for a provincial government in relation to a federal court ruling that conflicted with their legislative agenda.

"It's saying quite literally, notwithstanding what the court said we don’t want this to apply for five years," Day told National Observer. "It wasn’t saying we’re not listening, or we’re not paying attention. We just want, for the sake of our province, we want to put a 5-year hold on this."

The clause has been controversial since it was first inserted in the charter at the 1981 First Ministers’ Conference, during a national debate over the repatriation of the Canadian Constitution. It was introduced to as a compromise between then-prime minister Pierre Trudeau and several premiers who were opposed to the Charter.

According to a May 2018 parliamentary research paper, the notwithstanding clause deals specifically with Section 2 of the Charter, regarding rights such as the freedoms of expression, conscience, association and assembly, and Sec. 7 to 15, regarding the rights to life, liberty and the security of the person.

"(The notwithstanding clause) was never intended as some kind of a thermonuclear warhead of a response by a province," Day said. "I’ve never been one to say this is the last nuclear option available. I think any provincial government has the right to consider to put an issue on hold or not."

Olivia Chow, a former member of Parliament and Toronto city councillor, said that when a provincial government makes the decision to invoke the notwithstanding clause, it suggests the issue is "nationally significant." But she doesn't believe Ford's legislation falls into that category.

"The Charter of Rights is a Canadian policy that protects every Canadian," Chow said. "It's not for (Ford's) personal vendetta against a city council he doesn’t like."

"To go to that extent to punish people, that's so not Canadian," Chow said. In my opinion, it's vindictive, it's mean spirited."

Day recognizes that there is an irrational fear associated with the notwithstanding clause that isn't warranted, noting that it is designed to not be used in any situation. "It hasn't been used a lot but its been used and Canada did not self destruct because of its use," he said. "It's use has never resulted in the end of democracy as we know. It didn’t happen when Saskatchewan used it. It didn’t happen when Quebec used it."

Premier Ford's use of the

Premier Ford's use of the notwithstanding clause is a gross over the top decision. Ontario has more problems than the Toronto City Council requiring urgent action. Leave it alone deal with the Council situation at a later date.

His decision is short sighted and deviates from the original agenda he put forward.

It's time the government addressed the real Ontario problems instead of wasting Tax Dollars on Toronto.

Ford isn't going to "fix" anything. The damage he will do *may* be mitigated if any of the cabinet or caucus has the backbone to defy him although early signs are discouraging. Caroline Mulroney has revealed herself as a spineless coward already. Everything Ford puts hand to will be diminished in capacity to deliver meaningful benefit to the people of the province with the exception of the very wealthy. They're going to make out like gangbusters. Everybody else will be screwed-repeatedly.

Trumpism has arrived in

Trumpism has arrived in Canada! What a waste of s33. A manufactured crisis when he instead could be trying to do something good for the province. Let the people of Toronto decide if their counsel is too big!

Ford has already out-Trumped the dump down south.

"I" was "elected" by "the people" and therefore can do whatever I want.

Justin Trudeau...."If you disagree with me you're a racist." What is the difference?

No matter how Stockwell Day

No matter how Stockwell Day tries to polish this, the use of it to satisfy a personal vendetta - because intent is a factor - is not OK. I hope his supporters realise that those hard-earned dollars that they pay their taxes with, apparently reluctantly, are going to spent in the Courts. How many suits so far? Tesla, which they lost. Now we have Greenpeace, and the sex ed debacle, and the wind turbine company, and what others?

Ms Mulroney
What is your problem?
Your father was/is a great democrat
Ms Elliott,
What is your problem?
You and your late husband were/is great democrats..
Members of the Ontario Conservative government caucus, what is your problem?
Are you not all democrats??
How can you support this very undemocratic legislation to reduce the democratic process in Toronto by reducing the access to the city’s citizens to their local politicians by nearly 50%?
I doubt Brian Mulroney and Jim Flaherty, even Stephen Harper, would support this legislation.
Please show some spine, vote against it. What do you fear? This is not a non-confidence vote, defeating it will not cause a new election. What will the autocrat do should you vote against this legislation en masse? Absolutely nothing, he needs you all more than you need him.
It will also show that you have principles, and are not governed by crass partisanship!
Come on, show you have spine, and principles.

PS: Note that I am NOT from Toronto, I am even not from Ontario, but I do care about democracy in Canada.

What is the difference

What is the difference between Ontario and Ottawa? I don't see the difference. Do you? Justin's transparency ended after he won the Federal election. Democracy? Not anymore.