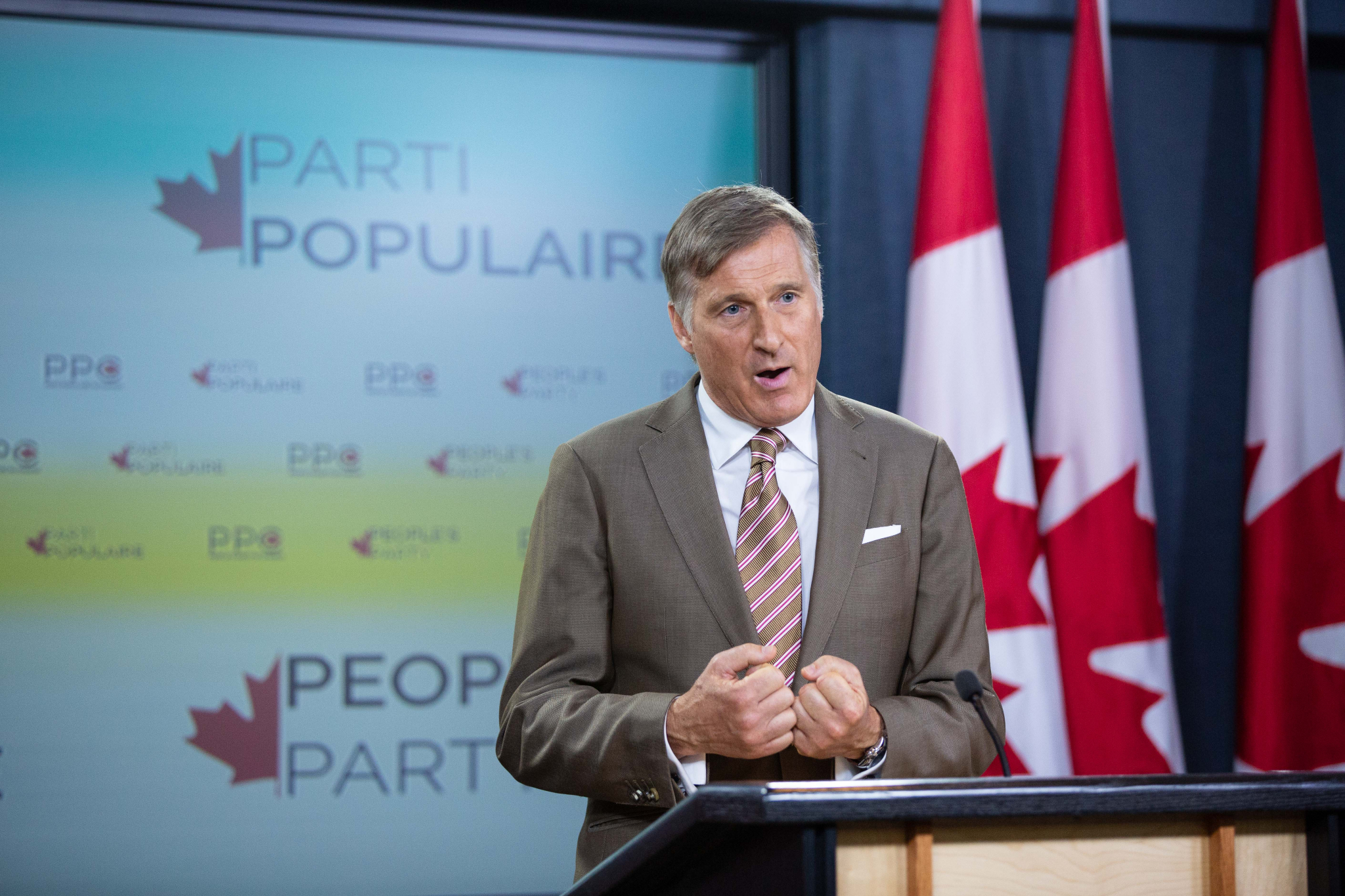 Quebec MP Maxime Bernier unveils the name of his new party at a press conference in Ottawa on Sept. 14, 2018. Photo by Alex Tétreault
Previous story
Next story

Maxime Bernier says his controversial use of Twitter, where he suggested that “more diversity” will “destroy” what has made Canada great, can be compared to an infamous user of the social media platform.

But he says he believes that's where the similarities stop.

"If you want to compare me with Donald Trump, maybe what I’m doing with social media, that can be a comparison. But I think that's it,” he told reporters in Ottawa on Friday, who asked him how he stacked up against the U.S. president and Ontario Premier Doug Ford. "We're using these networks to draw attention to what we're saying.”

The exchange was part of a news conference staged by the Quebec MP to unveil the name, logo and website of his new party: the People's Party of Canada.

The ex-Harper government minister and failed Conservative Party leadership candidate first announced Aug. 23 that he was quitting the Conservatives because they had become "too intellectually and morally corrupt to be reformed.”

Bernier, who represents the federal riding of Beauce, which touches the U.S. border south of Quebec City, has made it clear he wants to see legal immigration to Canada lowered overall, and the ratio of the type of immigration changed at the expense of refugees.

His comments on “ever more diversity” have landed him in hot water before; he was criticized as “racist,” for example, by Liberal MP Adam Vaughan.

He qualified his statements on newcomers Friday by stating he is “very open to immigration” and that "diversity can remain a pillar of this country.” He also said he wants to promote values like respect, “equality before the law” and “equality between men and women.”

At the same time, he adds “it’s important to talk about what unites us.” He says he wants to "have a debate on immigration figures.”

While he wouldn’t yet commit to specific numbers, he said he wants the "appropriate number of new Canadians that Canadian society can actually absorb.”

Bernier wants to see the type of immigrants who come to Canada in order to upgrade their economic status to be increased, while those who come to reunite with families or to escape terrorism or threats to their life as refugees decreased.

He also wants to see the situation at the Quebec border dealt with — although he wouldn’t say specifically how.

"We have a problem right now with migrants crossing the border. The federal government is not able to deal with it right now. Let's have this debate."

Bernier said he picked the name “People’s Party” because "it is time that the government put the Canadian people first when they make decisions and policies.”

He calls his approach "smart populism,” based on “serious reforms, necessary reforms in Canada, serious public policy that are well thought out.”

He said he thought the new party would be able to attract the large portion of Canadians who don’t vote in elections — those who are fed up with politics. And he offered that his party could attract people from across the political spectrum, even “socialists.”

Even so, he said he wasn’t looking to attract the support of his former colleagues. “I don’t have time for that,” he said. "They're not real conservatives.”

On Friday, he rolled out more details about his new party, including the name and party logo, and boasted he had already raised $140,000 from 2,500 donors, although he noted he could not issue tax receipts yet.

He’s got two people on the payroll, he said: Martin Masse, a long-time organizer, and Maxime Hupe, who was his leadership bid spokesman.

Bernier said he is opening his party headquarters in Gatineau, across the river from Ottawa. He hopes to run candidates in all 338 ridings by the next general election, scheduled for Oct. 21, 2019.

He’s got a long way to go: he said he hasn’t finished paperwork with Elections Canada, hasn’t formed a board of directors and hasn’t finalized a constitution.

Although theoretically, he said, he will be the future leader of the party.

Bernier added he’ll have another announcement in two weeks to unveil the party executive.

Bernier says he has raised over $90,000 since quitting the Conservative party