Intrigue, impasse persist over NAFTA as Canada-U.S. talks drag on 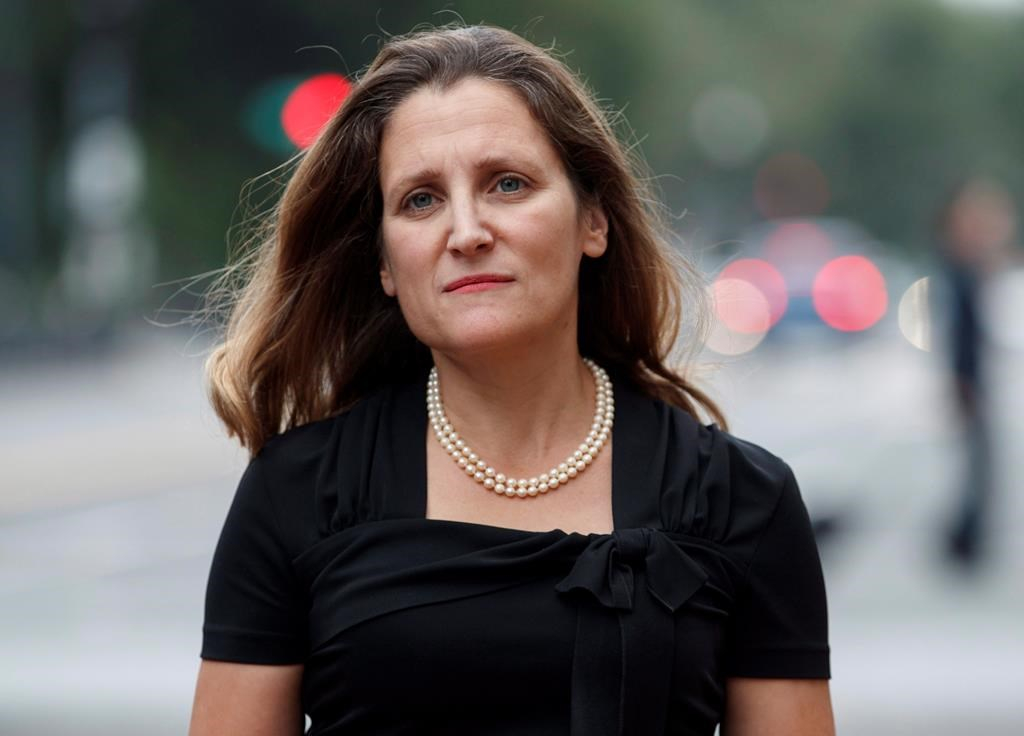 Chrystia Freeland was not happy.

With trilateral NAFTA talks having been on hiatus for most of the summer, the foreign affairs minister was in Berlin, barely one full day into a week-long diplomatic mission to Europe, when news emerged that the United States and Mexico had forged their own trade alliance in Canada's absence.

By Aug. 28, Freeland was back in Washington, hosting a meeting at the Canadian embassy, where sources say she gave members of the Mexican negotiating team a piece of her mind.

"She brought them in for that purpose," said one source familiar with the encounter.

By all indications, things haven't improved much.

Three-way talks with U.S. Trade Representative Robert Lighthizer and Mexican Economy Secretary Ildefonso Guajardo have not taken place since, and none are imminent. Freeland is spending Monday in Ottawa for the return of Parliament.

Last week, in Washington for a full day of meetings with Lighthizer, Freeland insisted the bilateral negotiations have been "constructive," "productive" and brimming with "goodwill."

But multiple sources familiar with the tenor of those talks, speaking on condition of anonymity given the sensitivity of the matter, say the mood has been decidedly less cordial than the minister lets on in public.

"Mexico stated from the beginning of the negotiation that the ideal scenario is for NAFTA to remain trilateral," he tweeted Wednesday from Washington, where he was taking part in a legal review of the agreement in principle with the U.S.

"We hope the U.S. and Canada will conclude their bilateral negotiation shortly. If that is not possible we are ready to advance bilaterally with the U.S."

There's confidence in Ottawa that Congress won't approve a deal without Canada. But with a good Mexico-U.S. deal on the table and the clock ticking toward game-changing U.S. midterms in November, that's not a given, warned Dan Ujczo, an Ohio-based trade lawyer with Dickinson Wright.

"I think while Congress is generally supportive of Canada, given that Canada is playing defence on a lot of these issues, I don't know how long that will hold," said Ujczo, who is well-versed in NAFTA's nuances.

"I envision a scenario where Congress will be very noisy about getting Canada in, but at the end of the day they'll let the U.S.-Mexico deal proceed, so long as the status quo with Canada is maintained while we negotiate."

The prevailing narrative throughout the 13-month saga has revolved around a number of primary sticking points — maintaining an independent dispute resolution mechanism and the way Canada protects its dairy farmers.

Dairy will be on the lips and minds of many Monday on Parliament Hill, especially given U.S. President Donald Trump's penchant for railing against Canada's supply management system for dairy, poultry and eggs, and the pivotal importance of Quebec — home to nearly half the country's dairy farmers and currently in the throes of a provincial election campaign — to the federal government's own electoral fortunes.

One place where supply management hasn't been as hot a topic as advertised? The NAFTA talks themselves, officials suggest.

Canada has already offered to allow limited additional access for American dairy producers, they say, and to drop a new class of milk that effectively shut them out of the Canadian market for milk ingredients like protein concentrates, skim milk and whole milk powder.

"I don't think it's surprising that they would have been able to come up with a creative solution for dairy," given the degree to which the issue has been "right in the U.S. crosshairs," said Ujczo.

Rather, it's dispute resolution that remains the biggest hurdle, insiders say. The U.S. wants to scrap it and allow American courts to judge trade disputes. Mexico has agreed. But Canada is insistent that some form of independent bi-national dispute resolution be part of the deal.

The U.S. has also steadfastly refused to promise that a NAFTA deal would bring an end to punishing tariffs levied against Canadian steel and aluminum on national security grounds.

The U.S. deal with Mexico includes 10 years of data protection for biologics — drugs developed from living organisms or their components — compared to eight years in Canada, meaning cheaper generic equivalents can be made available sooner. In the U.S., the threshold is 12 years.

All the sound and fury over dairy tariffs and dispute resolution has obscured the patent protection issue, to the potential detriment of Canadian drug consumers, warned Marc-Andre Gagnon, a professor at Ottawa's Carleton University who specializes in pharmaceutical policy.

"Right now it's all about supply management and Chapter 19. This is for me another serious issue that could have a huge impact on the cost we are paying for drugs," Gagnon said.

"We're just providing wheelbarrows of money to drug companies without getting anything back in return. If you increase intellectual property protection, that does not bring any additional investment to Canada. It just helps foreign companies make more profit."

If Canada has already agreed to extend data protection for biologics, that might explain why Ottawa remains confident that Congress — awash in Big Pharma lobbying and campaign contributions — won't proceed without it.

Raising the question: are talks indeed stalled? Or is Canada just stalling?

"Nobody can really explain to me how Canada's going to get a better deal in a few months from now than they would today," Ujczo said.

"I think it's more political than procedural at this point. I can't see the U.S. changing its position on a lot of these areas. Why would it?"

Freeland to head back to Washington for high-level NAFTA negotiations