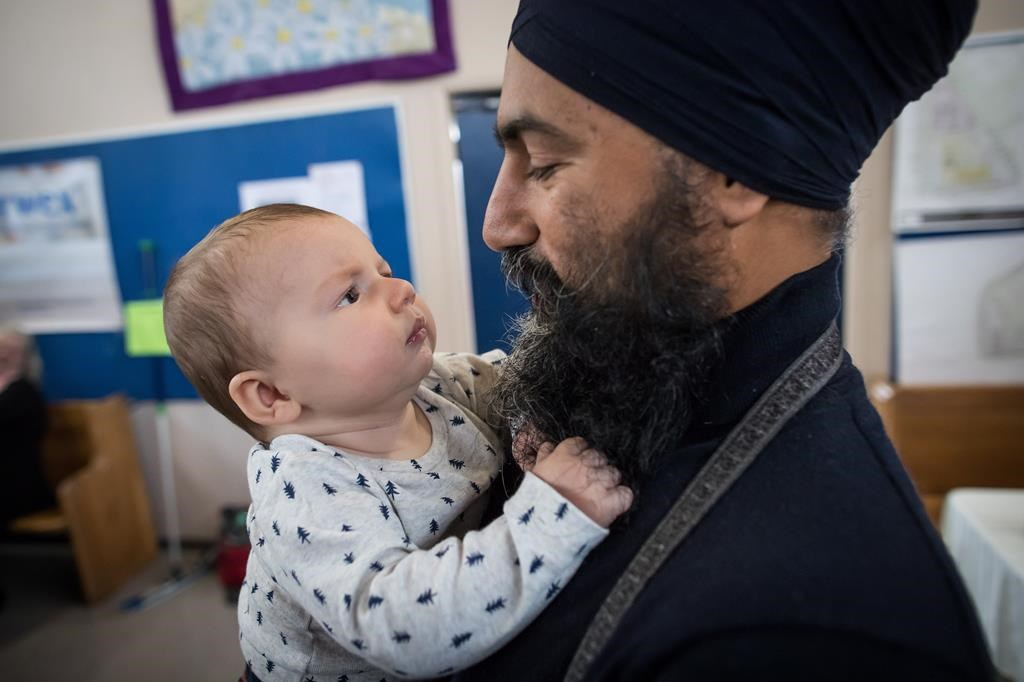 NDP Leader Jagmeet Singh holds Laurier LeSieur, 5 months, while speaking with his parents during a visit to the Rumble on Gray Street Fair, in Burnaby, B.C., on Saturday, September 15, 2018. Photo by The Canadian Press/Darryl Dyck
Previous story
Next story

A crowd cheered and clapped as Singh formally announced his nomination for the riding of Burnaby South at an event Saturday.

Singh told them he wants to have a strategy that will solve the housing crisis in Vancouver, reduce the cost of prescription medications and fight climate change by focusing on clean energy.

"What's at stake is we've got a Liberal government that is not doing what people need," he said.

"Instead of investing and dealing with the national housing crisis, they spent $4.5 billion on buying a pipeline," Singh said as the crowd chanted, "shame."

He blamed the Liberals and Conservatives for the current state of the country, saying the two parties don't get and don't care what people are going through.

"Together we can do it," Singh said, adding that people are counting on the NDP and the party can't let them down.

Singh announced his intention to run in the riding in early August.

Burnaby South was held by former New Democrat MP Kennedy Stewart, who gave it up on Friday to run for mayor of Vancouver.

The 39-year-old Ontario-born Singh, who doesn't live in the riding, is opposed to the expansion of the Trans Mountain pipeline and has called for a more thorough environmental review.

The government, he has said, needs to invest in clean energy jobs.

The federal government's approval of the pipeline was recently overturned by the Federal Court of Appeal.

The pipeline runs from Edmonton to Burnaby and has met strong opposition in the Vancouver area.

Among Singh's supporters in the crowd was Allan Warner, a retired grade 6 teacher and a resident of Vancouver Kingsway. He described Singh as a hard worker, intelligent and a good candidate.

Warer said Singh is not conservative like Conservative Leader Andrew Scheer and is more honest than Prime Minister Justin Trudeau.

If Singh wins the byelection, he has said he will also run in the riding in the general election in 2019.

The date for the byelection has not yet been set.

The prime minister must call a byelection within six months of Stewart's resignation.

Singh represented the Toronto-area riding of Bramalea-Gore-Malton in Ontario's legislature from 2011 to 2017, and served as the provincial NDP's deputy leader before replacing Tom Mulcair as federal leader last fall.

B.C. deputy speaker, Burnaby-Edmonds NDP MLA Raj Chouhan, said he thinks Singh has a "very good chance" of winning the riding in spite of being from Ontario because he has a high profile, which will give the issues that people care about a voice.

"What we have seen under the Harper government and even under Mr. Scheer... all they talk about is how to make it easy and more profitable for the top one per cent."

Singh, he said, is in touch with the grassroots and understands issues affecting the common man.

The difference between Singh and Scheer is "like night and day," he said.

Singh wrapped up a three-day caucus retreat in Surrey, B.C., this week amid criticism from party stalwarts about weak fundraising and his controversial decision to oust a Regina MP over harassment complaints.

Alex Chan a third year undergraduate student at Simon Fraser University who introduced Singh on Saturday at the nomination event said he understands that the party has work to do raising funds, and they will do it.

During the retreat, Singh delivered a campaign-style speech to supporters where he took several jabs at Trudeau, giving a glimpse of what could turn out to be a feisty campaign.

In an interview earlier in the week he acknowledged that it's been tough to achieve his vision as a new federal leader although he has found the experience rewarding.

Singh also said he has to do a better job of communicating with Canadians.