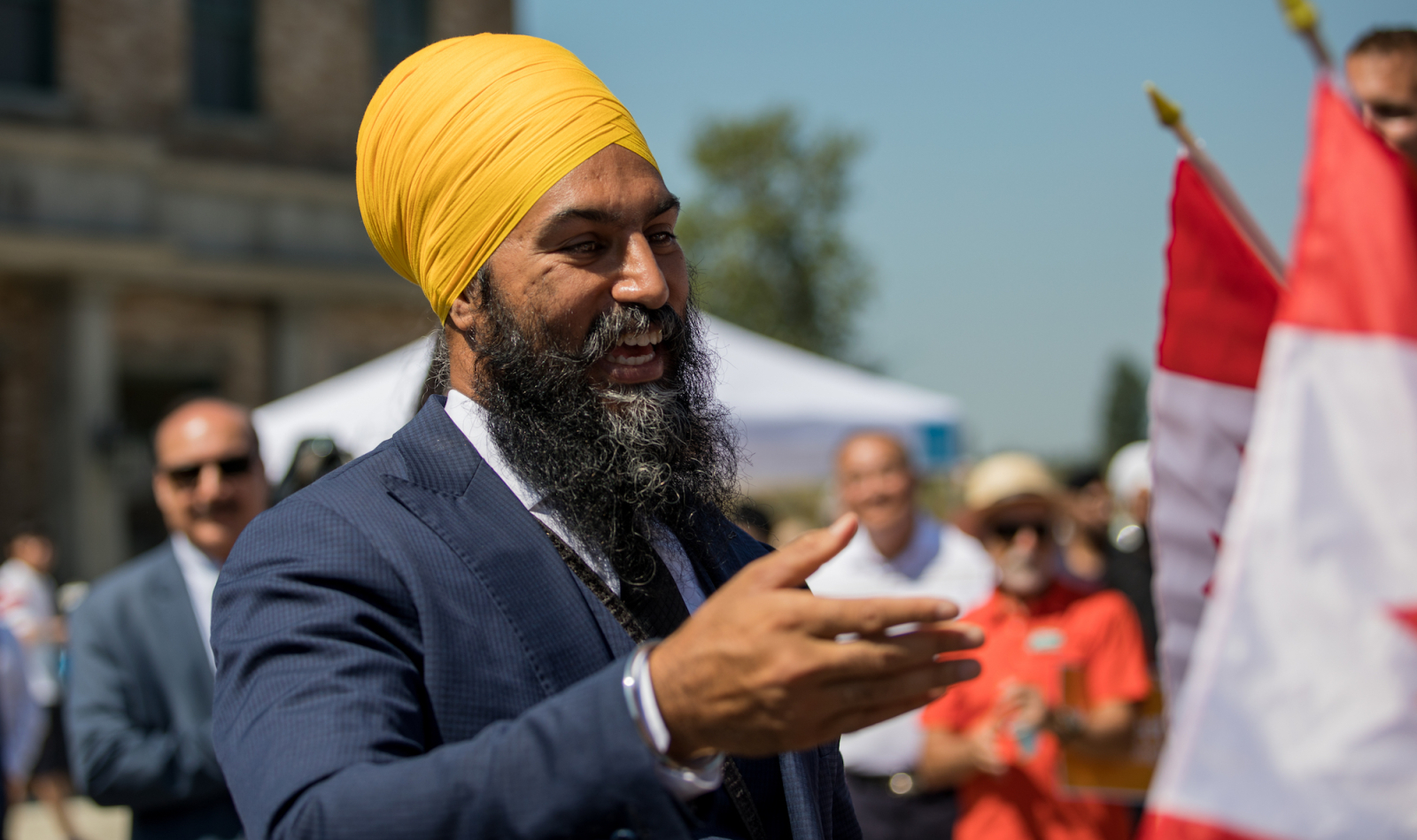 NDP Leader Jagmeet Singh was in Burnaby on August 8, 2018 to announce his run for Parliament. Photo by Michael Ruffolo
Previous story
Next story

“Me and my wifey, we’re coming together,” Singh told a crowd of about 200 supporters and media gathered around an outdoor New York-themed movie set in the metro Vancouver suburb on Wednesday.

Singh was using the occasion to confirm the long-anticipated news that he would be running for a seat in the House of Commons in the Vancouver-area federal riding of Burnaby South.

“I’m committed to Burnaby South,” he said. “I’m all in on Burnaby. My wife and I talked about it. I’m going to run here.”

Prime Minister Justin Trudeau is expected to call a byelection in the riding in the coming months following the departure of NDP MP Kennedy Stewart, who resigned to enter the race to become Vancouver’s next mayor. No date has been set yet for the vote.

The riding has some of the strongest opponents to Kinder Morgan’s Trans Mountain pipeline expansion project, including a mayor, Derek Corrigan, who has said he’s willing to stand in front of a bulldozer to stop construction in his town, which is the site of an oil tanker terminal for the project.

“I’m running because Trudeau lied about electoral reform. We need to have our voices represented in government,” Singh said.

Singh said there were also a number of reasons why Burnaby needs to have him as their representative in the Commons, including resolving issues such as the need for a publicly-funded drug insurance program or pharmacare as well as affordable housing. On both issues, he said that the Liberal government was dragging its feet.

“I’m here to say the people of Burnaby can’t wait,” Singh told the crowd, drawing cheers and applause. “I’m running because we don’t need another study on pharmacare. We need our prescription medication covered now.”

Singh later told reporters he would continue the fight against the government’s plans to spend billions of taxpayer dollars to purchase the Trans Mountain project from Kinder Morgan.

“We should not be spending our dollars that way,” he said in response to a question from National Observer. “We can create jobs and opportunities that are long-lasting and that are sustainable.

Singh was the Ontario NDP's deputy leader and the MPP for Bramalea-Gore-Malton before he won the national party's leadership race in October, 2017. Since his win, Singh has been without a seat.

He brushed off a question about the risk to his leadership if he doesn't do well in the byelection, but said he would remain as leader if he loses.

"We need to have action now and we need to push this government to do the things that we need now."

A statement from the Liberal Party of Canada said members in Burnaby South are looking forward to a campaign focused on Justin Trudeau's positive plan to improve the lives of families in Burnaby.

It said over 10,000 B.C. residents have signed up as new Liberals in the last two years alone.

"We wish Mr. Singh well as his party's candidate in the riding, and we're looking forward to a positive campaign to contrast our ideas with the other parties."

with files from Laura Kane, The Canadian Press

Editor's note: This article was updated at 8:30 p.m. on Aug. 8 with additional quotes from Jagmeet Singh, from the Liberal Party of Canada and additional background information.

Despite the heat, it was a

Despite the heat, it was a great event yesterday. Now we need to HELP Mr. Singh push this aggressive agenda by keeping his feet to the fire!

It seems to me that the NDP

It seems to me that the NDP is the only party at this time looking after the concerns of people living in British Columbia. Certainly that is true Provincially. People of BC who want to protect our coastline, our future energy production and position in the world stage as a result, and our voting rights may agree. I support this platform. Let’s see if he has as much honesty and integrity once elected as Premiere Horgan. Seems to me, in general, politicians think one way when campaigning and then switch their perspective when elected.