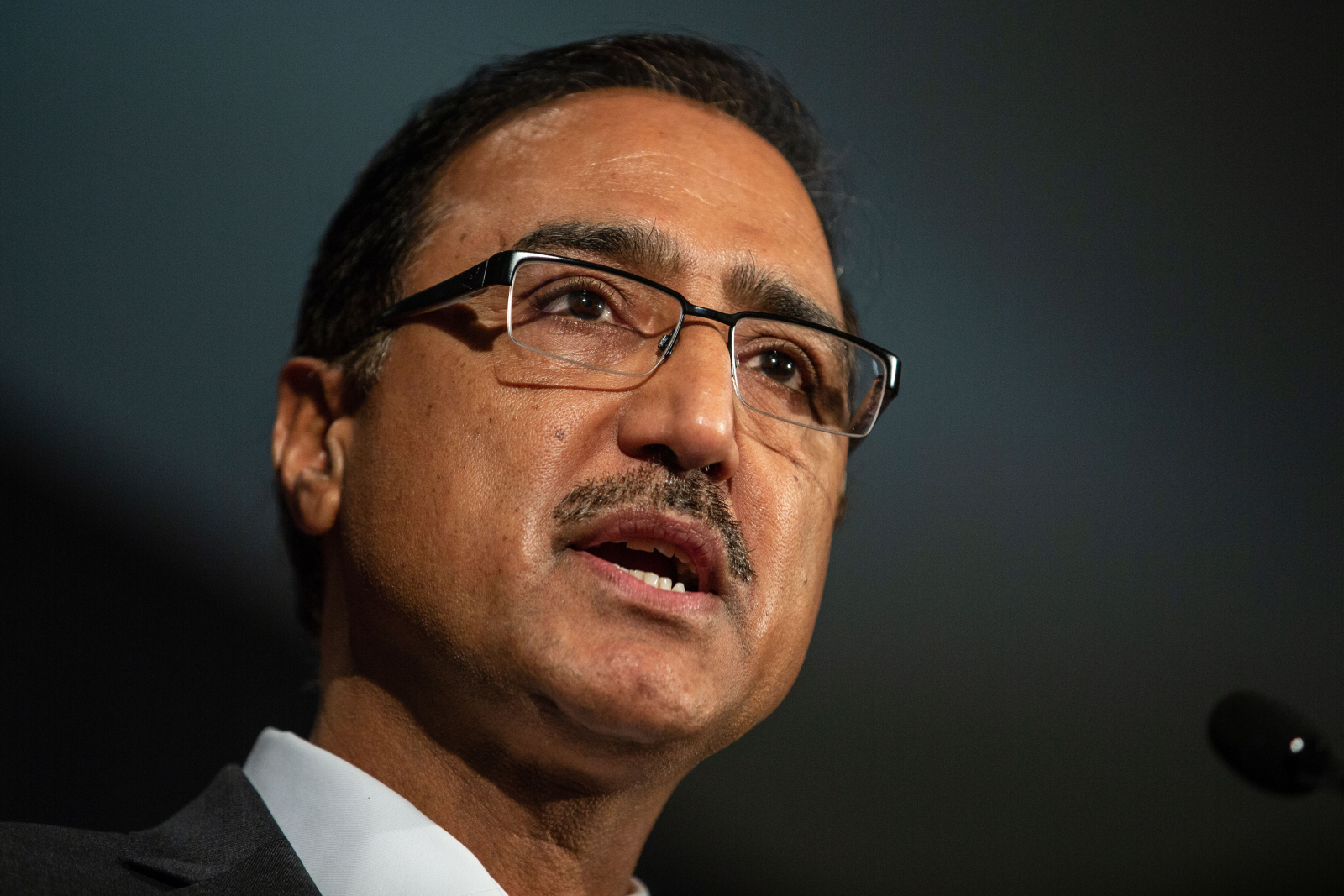 The Trudeau government is asking the National Energy Board to reconsider its recommendations for the Trans Mountain oil pipeline expansion project that was struck down by the courts this summer.

The NEB will now have 22 weeks to "complete a thorough and prompt review" of the decision and deliver its new report, Natural Resources Minister Amarjeet Sohi said Friday in Halifax. That timeframe would place the new deadline on Fri. Feb. 22, 2019.

The Federal Court of Appeal quashed the government’s approval of the Trans Mountain expansion project on Aug. 30 after concluding that Prime Minister Justin Trudeau’s cabinet made its decision without considering all evidence and failed in its legal duty to consult First Nations.

NEB 'confident' it can complete work in time

Canada said on May 29 it would buy the pipeline and expansion project from Kinder Morgan Canada for $4.5 billion, and ordered one of its Crown corporations, Export Development Canada, to help arrange the purchase.

Sohi announced the new review alongside Fisheries and Oceans Minister Jonathan Wilkinson on the sidelines of the G7 meetings that have been taking place this week in the east coast city.

"We are confident that this plan will allow us to meet the highest standards that Canadians expect when it comes to protecting the environment," said Sohi. "Today's decision is one important step to move forward following the court's decision."

The government has issued a new order to the NEB to "reconsider its recommendations as they are relevant to project-related marine shipping," the board announced Friday.

"The NEB is confident that we will be able to complete this work within the required timeline," it said in a statement.

Tsleil-Waututh welcomes recognition of its position

If completed, the Trans Mountain expansion would add new kilometres to an existing pipeline system, to ship up to 890,000 barrels of bitumen and other petroleum products per day from Alberta’s oilpatch to a marine terminal in Metro Vancouver.

Fossil fuel producers in the province, as well as the federal and Alberta governments, have been pushing the project as a way to generate economic growth by accessing new markets for Canadian petroleum across the Pacific Ocean. Both governments say the project is necessary to help Canada finance its transition to a low-carbon economy.

But the Tsleil-Waututh Nation, Coldwater Indian Band, Squamish Nation and dozens of other Indigenous communities, as well as environmentalists and some municipalities say the project is too risky and runs counter to Canada’s climate change goals.

On Friday, the Tsleil-Waututh Nation said it welcomed the government’s "recognition of our long held position" that marine shipping should have been included in the NEB's assessment.

"As the Federal Court of Appeal found, the impacts of marine shipping on Tsleil-Waututh’s title and rights were not addressed in the original approval," it said in a statement. "In the 2015 Tsleil-Waututh assessment of the proposal, we documented the extensive harm increased vessel traffic will bring to the Tsleil-Waututh community."

The coastal nation near Burnaby, B.C. added it anticipates that more review and two-way dialogue "will take more than 22 weeks." It said any plan for additional review "must be developed in collaboration with the Nation."

Keith Stewart, senior energy strategist with Greenpeace Canada, said the government is still proceeding as if environmental assessment and Indigenous consultation was "a box-checking exercise."

"It’s not true consultation or science if you’ve decided on the answer before asking the question,” said Stewart.

New deadline ahead of Alberta election

The NEB's new deadline would mean that the board will have to deliver its new report on the project before the provincial election in Alberta, scheduled to take place between March 1 and May 31, 2019, according to Elections Alberta.

Alberta Premier Rachel Notley pulled the province out of the national climate agreement after the court's ruling, saying she wouldn't agree to raising the price on carbon pollution in the province until the government gets the project back on track.

Sohi wouldn't say whether the new 22-week timeline had anything to do with assisting Alberta before its election.

"What we are focused on at this time, is to make sure that we are taking the right steps, that we are living up to the highest standards when it comes to protection of the environment, and consulting with Indigenous peoples," he said.

"When you look at the work that has been done already, in response to the issues that have been identified by the court...we are very confident that within 22 weeks the NEB will be able to follow the procedural process that it needs to follow."

Sohi also said he would not "pre-judge the outcome" of the NEB's decision. “We will not comment on what the decision of the NEB is going to be," the minister insisted.

"That is something that the NEB will decide after listening to the presentation from various stakeholders. The NEB is an independent party that makes decisions on its own based on the evidence that is presented to them."

'Marine technical advisor' to be sent to NEB

The unanimous federal court of appeal ruling said the NEB made a “critical error” when it decided not to include oil tanker traffic in the scope of its project. That meant the board ignored the consequences to the environment of increased tanker traffic off the B.C. coast, which the court said sparked a chain reaction of “unacceptable deficiencies" that tainted the NEB’s final report.

Wilkinson said the government will now order the board to put that back into its analysis.

“The court, as you know, found that the process with respect to marine effects, and specifically with respect to the impacts, or potential impacts, on additional marine shipping on the southern resident killer whale — and therefore, the government’s obligations under the Species at Risk Act — were improperly scoped out of the process...what we are saying is, we are scoping those back in,” said Wilkinson.

The government is also planning to appoint a "special marine technical advisor" to the NEB as part of a plan to "present" to the NEB "recent government actions" to protect the southern resident killer whale, which the board had found would be significantly adversely affected by oil tanker traffic.

The Trudeau Liberals have undertaken a wide range of actions to encourage the recovery of the whales including adding more fishery officers, requiring mandatory minimum distances to approach them, installing underwater noise monitoring devices, increasing aerial surveillance and working with ferry operators on a noise management plan.

The government also expects to make two more announcements on the project in the coming days, noted Sohi.

Ottawa will announce "shortly" how it plans to deal with the court's ruling that meaningful consultations weren't carried out with Indigenous peoples.

"I have already started reaching out to Indigenous leaders, and even before the decision of the federal court came out, I started that outreach,” said Sohi.

"When that is announced, we will have a more definitive understanding of the timeline" to the project's completion, he added.

As well, the government will make another announcement related to its decision on whether to appeal the federal court's decision to the Supreme Court.

"Whether to appeal or not to appeal, or other options that are on the table, we will be announcing those very, very shortly," said the minister.

The NEB made its decision to exclude tanker traffic from its analysis on April 2, 2014, during the majority government of former Conservative prime minister Stephen Harper. The review was done under new rules that were set up by the Harper government in 2012, after they overhauled environmental laws.

Sohi wasted no time pointing the finger. "This review process was created by the Harper Conservatives," he said in his opening remarks to the press. "We inherited a flawed environmental review process from the previous Conservative government and made efforts to improve it."

But federal Conservatives have denied responsibility for the mistake in comments to National Observer. Instead, Tory MPs have pointed the finger right back at the Trudeau government for failing in its own due diligence.

“To try and blame the Conservatives for something that happened six or seven months after Justin Trudeau took office, for decisions that his government had made exclusively after he took office, is a little bit rich," Tory finance critic Pierre Poilievre said Sept. 4 on Parliament Hill.

On Friday, Conservative natural resources critic Shannon Stubbs said the government had missed an opportunity to provide a "concrete plan."

“While we welcome the preliminary announcement of one small first step, the Liberals have utterly failed to deliver a comprehensive concrete plan to ensure the Trans Mountain expansion can proceed," said Stubbs.

"Thousands of workers have lost their jobs because of Justin Trudeau’s failure. They deserve federal leadership and a clear plan."

Editor's note: This story was updated at 2:10 p.m. ADT and at 4:15 p.m. ADT to include additional information and quotes about the announcement.

22 weeks eh? And using the same "flawed" people and processes originally put in place by the oil/gas people who bent the Harper Govt. to its will - to the extent that throughout the history of the Tar sands development, the lethal effects of the dirty oil coming out of Alberta on the global environment were not even part of the discussion!

This existing NEB is so tainted that the decision is a foregone conclusion. Once again contrary opinions about: the economic viability of dilbit in the world's petro economy will still be ignored; the calculations on how much additional carbon/methane will be released into the atmosphere will not weigh in the balance; the fact that there is NO effective means of "cleaning/removing" spilled fossil fuel from oceans and other waterways; the fact that this particular pipeline is crossing tectonically active territory which makes its integrity problematical - even minor earth tremors can trigger pipeline failure; the fact that the existing pipeline has a dismal record of failures.... None of that has changed, nothing has changed except the ownership of this disaster.

Just how much difference is the new, improved (?) NEB going to make - after the fact?

The NEB des not have the

The NEB des not have the trust of the public, and thus is the wrong outfit to do this.