Toronto police need to answer for their actions 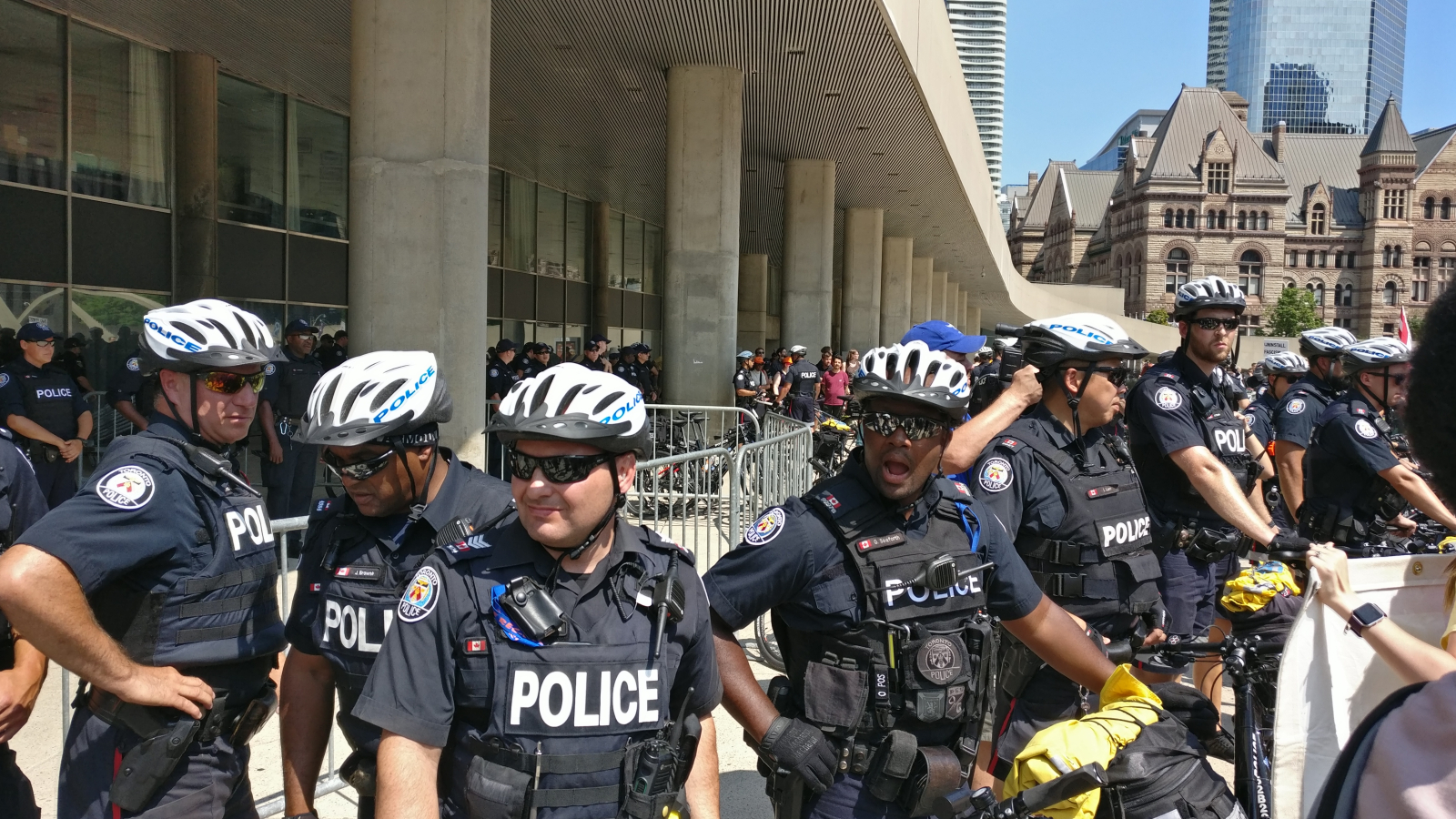 Toronto police keep anti-fascist protestors at bay during a demonstration on Aug. 11, 2018. Photo by Steven Zhou
Previous story
Next story

Toronto police need to answer for their actions at demonstrations where far-right and anti-facist activists are facing off. It's not okay to protect one group and leave the other vulnerable to harm.

The police are supposed to play an impartial role, especially when things devolve into violence. But complaints against police behaviour by leftists, backed by documentary and anecdotal evidence, have been piling up.

Police officials should acknowledge this increasing lack of trust, even if they deny specific accusations.

First impressions are everything

Toronto is a microcosm of how police conduct at far-right rallies have given the police a reputation of favouring the far-right. During far-right rallies, several dozen officers usually set themselves up as a bulwark around the protestors while outwardly facing left-wing counter-protestors.

The optics of this are bad. It makes it look like they’re are on the fascists’ side. This is what happened during a failed anti-Islam “rally” at downtown Toronto’s Nathan Phillips Square last month. The police formation contributed to the impression that police were happy to protect the far-right while turning a blind eye to their aggressive behaviour.

Complaints are mounting from anti-fascist activists (and some journalists) who allege unfair treatment by Toronto police. People associated with hard right groups like the Jewish Defence League and Soldiers of Odin have attended several Islamophobic rallies in downtown Toronto. A good number of them have engaged in physical intimidation and violence, yet the police resistance they’ve faced has been pretty limited.

Journalist Kevin Metcalf, for example, was physically assaulted and received death threats at such a rally while attempting to collect footage. He described the police as having formed “a wall of protection” around far-right protestors while taking a mostly hands-off approach with respect to their often aggressive behaviour. A more extreme example was when a Toronto police officer struck an anti-fascist last November at a far-right rally when the police couldn’t yank away a banner blocking far-right protestors from taking up space at Nathan Phillips Square.

Earlier this month, riot police formed a “human wedge” near another protest at Nathan Phillips to plow through a wall of anti-fascist protestors who wanted to prevent PEGIDA, the notorious anti-Islam hate group, from marching on the streets. Then there was the time when security at Nathan Phillips Square and Toronto police told anti-fascist organizers to pack up and leave a protest last summer because they didn’t get a permit for their sound system — a request that one lead co-ordinator says she’d never heard of despite months of demonstrating.

A Toronto police officer is seen striking a protester on Oct. 21, 2018. Video by Threat on Facebook

"In times like these, reiterating how cops are uniquely shielded from politics and ideas is just weak apologism. No one is totally insulated from the broader social atmosphere," writes @stevenzzhou. #TOpoli #onpoli

As someone who has attended a number of these protests, I've spoken at length to witnesses and participants. And I have to report that fascist protestors look to provoke violent clashes through physical and verbal taunts. Their online rhetoric reveals plans (or at least their desire) to see the other side suffer serious physical harm — a bloodlust that often plays out in reality, particularly when both sides show up with low numbers. Anti-fascists often return the favour with their own taunts and aggressiveness. Once things heat up, the scene becomes so chaotic that it’s almost impossible to trace exactly what is happening. The police step in when things devolve, but they’re almost always engaging menacing, mask-wearing “ANTIFA” agent provocateurs trying to violently de-platform conservative demonstrators.

Things are never so simple. At least in downtown Toronto’s rallies, the far-right has shown itself more than adept at starting and sustaining a significant number of very nasty, violent clashes.

Toronto police have an image problem

But it’s not just how police behave at rallies. The Toronto Police Service’s (TPS) tepid response to two of its officers posing with white nationalist mayoral candidate Faith Goldy shows yet again that law enforcement isn’t interested in reconciling their actions with their apolitical image. The officers in Goldy’s photo were sent over at her request to guard against what she claims might be violent anti-fascists.

According to the TPS spokesperson, the officers had “no idea” who they were sent to protect, nor did they know anything about the political context in which her canvassing session took place. Moreover, TPS said their officers are asked to be photographed lots of times throughout the day — who can keep track? No one, apparently, so why bother? What’s the big deal, anyway?

It's not exactly the kind of answer that alleviates nervousness about policemen harbouring far-right sympathies. It’s an image that squares well with anxieties over anti-Black racism in the force (expressed mainly through police brutality), or with the growing sentiment that police actually take no real issue with the far-right. It’s hardly a helpful reputation for an institution that claims to be perpetually dedicated to building trust with the broader community. Nobody wants neo-Nazis or their sympathizers to be part of their community, except for neo-Nazis.

In times like these, reiterating how cops are uniquely shielded from politics and ideas is just weak apologism. No one is totally insulated from the broader social atmosphere. That a significant number of officers have demonstrated sympathy for far-right ideas is a perception that the Toronto police force needs to explicitly address.

So what happens when the left

So what happens when the left wants a protected protest?

So what happens when the left

So what happens when the left wants a protected protest?