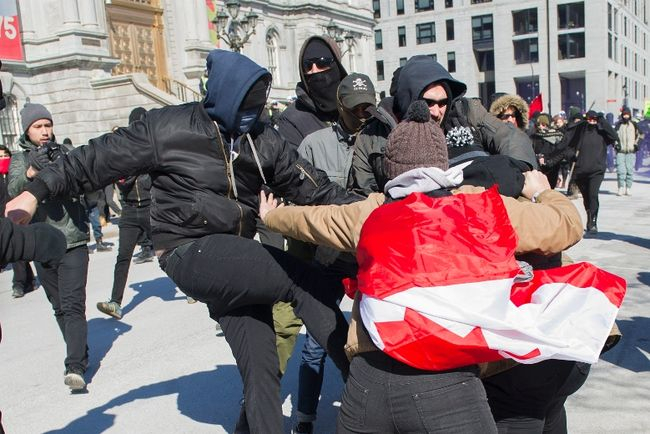 Police-reported hate crimes in Canada rose in 2016 for the third year in a row, and became much more violent, according to new data from Canada's national statistical agency.

Statistics Canada said Tuesday that attacks against a person’s sexual orientation, as well as people identified as South Asian, Arab or West Asian, East or Southeast Asian ethnicities, and as Jewish, all saw increases.

The increase in hate crimes coincides with a surge in rallies organized by far-right groups in Canada. Last weekend, tensions flared at dueling far-right and anti-fascist demonstrations in Quebec City, prompting dozens of arrests. Earlier this month, discriminatory posters appeared on the University of Victoria campus.

The year began with a violent mass shooting that left six men dead in January at a Quebec City mosque.

Violent hate-motivated crimes such as assault, threats, and criminal harassment also jumped to 563 in 2016, up 16 per cent from the year prior.

Meanwhile, the 214 crimes targeting Black populations in 2016 remained by far the most common type of police-reported hate crime in Canada, at 15 per cent of all such crime.

Police-reported hate crimes against the Jewish population also climbed to 221 incidents in 2016, 43 more than the year prior. The spike in anti-Jewish crimes were concentrated in Ontario, Quebec and Manitoba.

Last year, Statistics Canada said incidents targeting Muslims drove a rise in hate crimes in 2015. There continued to be police-reported hate crimes against Muslims, Catholics and Aboriginal peoples in 2016, although these categories declined in 2016 compared to the year prior.

The data only covers criminal incidents that are found by police upon investigation to have been motivated by hate against a defined group. The data agency cautions that police data on hate crimes “likely undercounts the true extent of hate crime in Canada,” as victims aren’t always willing to come forward, and police may not have the expertise or resources to identify the crime.

For example, the 2014 General Social Survey on Victimization, which measures self-reported Canadian hate crimes, showed that two-thirds of the 330,000 criminal incidents seen by victims as hate-motivated were not reported to police.

This hatred is increasingly

This hatred is increasingly coming across our southern border, duty-free.
Be kind to one another.