Tens of thousands without power after tornado in Ottawa region 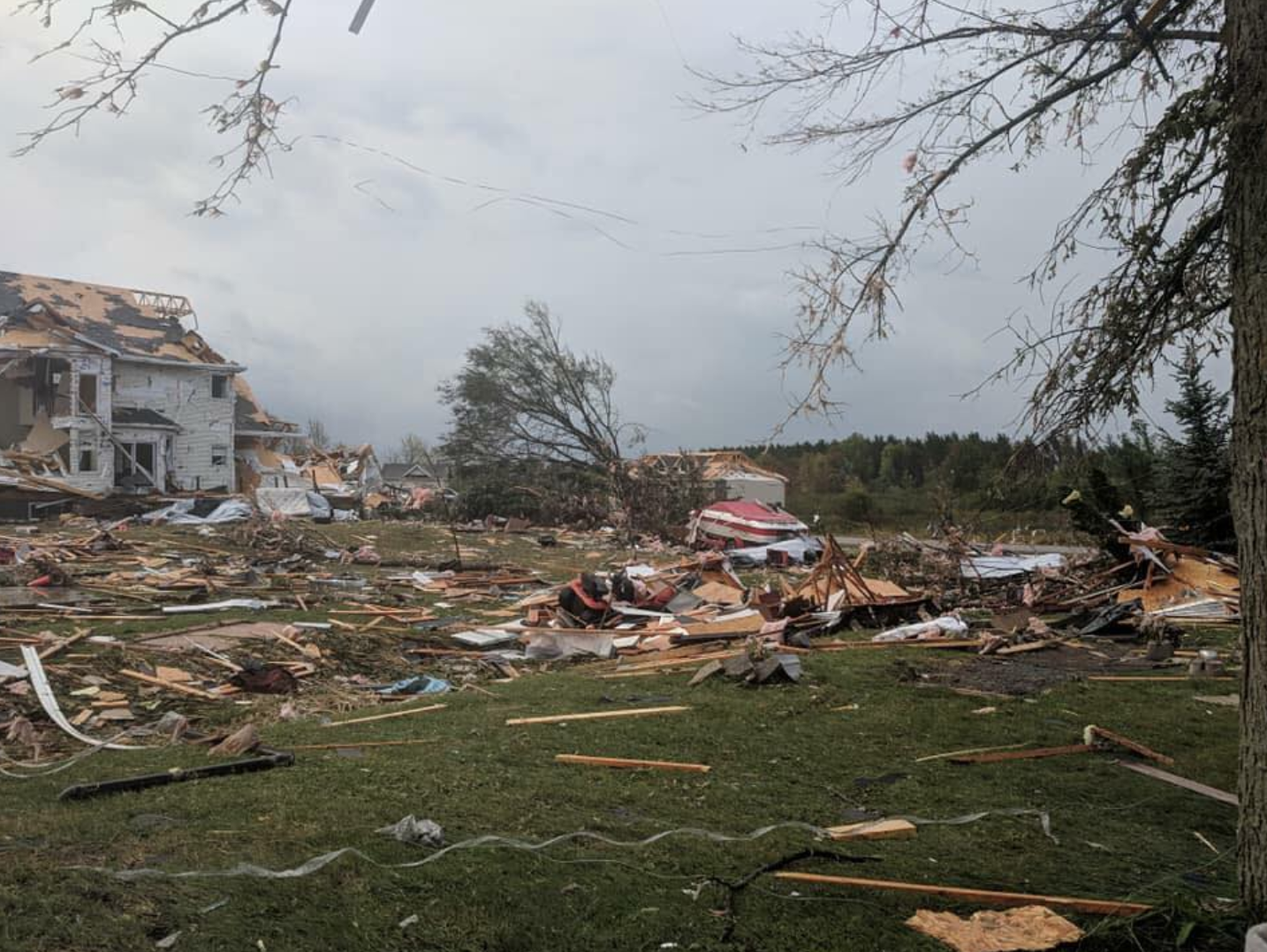 Some Ottawa homes, like the one seen here, were levelled to the ground after a tornado touched down in the region on Sept. 21, 2018. Photo courtesy of Ottawa Paramedics on Facebook
Previous story

Officials are beginning to tally the damage of a tornado that ripped through the Ottawa area yesterday, sending several people to hospital and levelling buildings. No fatalities or missing persons have been reported.

Hydro Ottawa says more than 170,000 customers were without power early this morning as a result of the twister, which blew through Ottawa, Dunrobin, Ont., and Gatineau, Que., late Friday afternoon. At a press conference Saturday morning, the distribution company said it expects the outage will be "multi-day," although it was not able to provide an estimate on when power may return to area homes.

The agency tweeted drone footage on Saturday morning showing a mass of hydro towers, trees and power lines felled by the storm. The footage below was recorded by Ottawa Rooftops on Facebook, and posted early Saturday morning.

Rooftop footage shot from the Tribeca condos in downtown Ottawa shows a tornado touching down in the Mont-Bleu area of Gatineau. Video courtesy of Ottawa Rooftops on Facebook

Meantime, Hydro−Quebec said 114,000 customers were affected by outages in that province.

Damage from the storm is major — roofs have been torn off homes and cars were overturned on Highway 50 — and the cleanup was just beginning on Saturday morning.

Gatineau Mayor Maxime Pedneaud−Jobin says 215 buildings were damaged or destroyed, and a total of 1,686 homes were affected.

The Ottawa Hospital said in a tweet last night that it was treating six people with injuries related to the tornado. The hospital said two patients were in critical condition, one had serious injuries, and the others were listed as either stable or in fair condition.

Officials warned people not to re−enter their homes until they had been deemed safe.

Ottawa Mayor Jim Watson has said the tap water in Ottawa remains safe to drink. Officials are advising residents to collect enough supplies for their homes for three days.

The disaster is being compared to the 1998 ice storm, which left nearly 1.5 million Ontario and Quebec homes without power and caused more than $5 billion in damage.

My sympathies are with the

My sympathies are with the people affected by this Tornado and also wondering if it made our Prime Minister and other Politicians wake up to the new realities of Climate Change.
Are they in too deep with the Fossil Fuel Companies? as Kevin Taft’s new book ( Oils Deep State ) seems to suggest.

I agree 100%. I really hope climate naysayers, including our PM, are paying attention to what our planet and environment are telling them or more of this (and worse) is on the way. Hoping for a full recovery for the people hurt by this tornado, I can't even image how terrifying this must have been for them.

Even this "terror tornado"

Even this "terror tornado" wake up call may not save us, that is if the models of atmospheric physicist Tim Garrett of the University of Utah are accurate.
Garrett’s research makes a decisive case that humanity is facing a global civilization / economic collapse by the end of this century. Based on a 19-page paper he published back in 2008, his models indicate that we're caught in a double-bind between a collapsing global economy, trending towards zero GDP, and an explosive growth in CO2 emissions trending to levels of 1200 ppm. Moreover, our only "emissions impossible" escape would be to build the equivalent of one nuclear plant per day, globally. There's apparently no way out. To put it succinctly and indelicately, "We're Screwed!"
It’s now 2018. So how come so few news and information outlets, and no politicians that I know of, dare whisper Garrett’s name and research publicly? I suspect we all know the answer to that question, but are afraid to speak it. I myself just came across his work a few weeks ago. But physics is not one of my academic strengths, and Garrett’s papers are cognitively intimidating. Until I can find an expert to do a critical analysis of his work, I rely on the efforts of other physics-literate folks who have written easier-to-read pieces about his research. And Garrett himself has provided interpretations of his academic papers that are very helpful.
In the meantime, I’m doing what I can to spread the word about Garrett and encourage others to do likewise. We may not be able to escape our fate, but at the very least we might be better able to navigate the existential collapse. Hope any who see this comment can help in this regard.

To read more by/about Garrett and his research, you might consider visiting my website link to an index of my posts about him: https://tinyurl.com/ya5qj9pd. The title of this page is: "Civilization/Economic Collapse ~ Links to All Posts By or About Dr. Tim Garrett’s Research." So far there are links in the index to 6 posts. I suggest you start with the piece I posted yesterday:
“For CO2 to decline, the global economy will have to collapse – An explanation for ordinary folks : It’s hard to imagine how civilization CANNOT be in dire straights during this century,” says physicist Tim Garrett. No 2375 Posted by fw, September 23, 2018.

This storm warning was meant to help North Carolina prepare