Security Council seat not an end in itself for Canada, says Trudeau

By Mike Blanchfield in News, US News, Politics | September 27th 2018 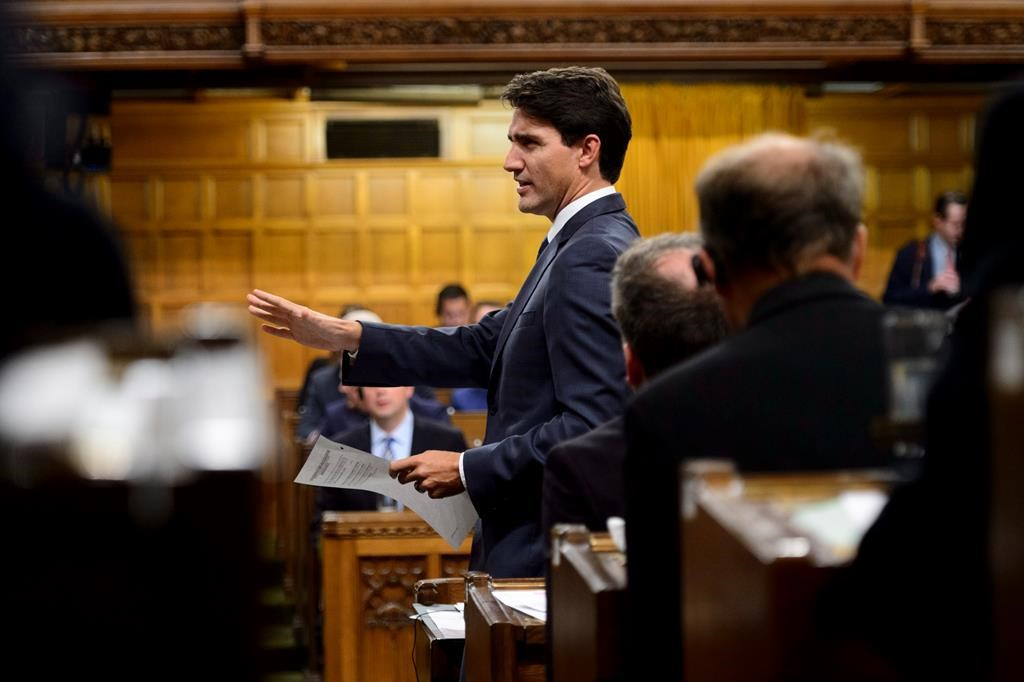 Prime Minister Justin Trudeau stands during question period in the House of Commons on Parliament Hill in Ottawa on Wednesday, Sept. 26, 2018. Photo by The Canadian Press/Sean Kilpatrick
Previous story

Prime Minister Justin Trudeau appeared to play down Canada's bid for a UN Security Council seat, saying Wednesday that winning would not be not an end in itself.

Securing a temporary seat on one of the world's most influential groups would be an opportunity for Canada to stand up for human rights on the world stage, Trudeau said before departing New York after two days at the annual gathering of General Assembly leaders.

Trudeau cited numerous meetings in New York that were focused on advancing his agenda to level economic playing fields across the globe, including getting more girls to school in developing countries.

But his explanation for why Canada belongs on the powerful UN body struck some as a deliberate attempt to tamp down expectations because of the country's low foreign aid spending compared to its competitors.

"I think people need to remember that attaining a seat on the Security Council for Canada is not an end in itself, it's a means to an end," Trudeau said.

"It's a means to ensure that Canadian voices are part of the highest level discussions in advancing democracy, and defending the rule of law, and in defending human rights."

The remark comes shortly after Canada received a negative assessment of its foreign aid spending by the Organization for Economic Co-operation and Development.

Spending on foreign aid is widely seen as one way to win the necessary two-thirds of support from the 190-plus countries in the United Nations General Assembly to win one of the rotating two-year terms on the council.

Canada is running for one of two seats against Ireland and Norway in 2020 for a term that would begin the following year.

Both countries have higher per capita spending on international development than Canada.

"Trudeau's comments are indeed an attempt to temper expectations," said Bessma Momani, an international affairs professor at the University of Waterloo and Balsillie School of International Affairs.

"There are high hopes that we'll resume our place at the UN Security Council, but we're up against stiff competition like Norway and expect to ride on our positive global reputation without having spent a lot of money on campaigning."

New statistics recently tabled in Parliament show Canada is behind the pace of campaign spending it set in the 1990s when it last won a seat.

Global Affairs Canada says in response to a written question that the government has spent $532,780 since 2016 on its campaign, a lower rate than the $1.9 million spent over four years to win its last two-year term in 1999-2000.

The OECD chided Canada for not spending enough on international development for a rich country despite the credit it deserves for its advocacy for the rights of women and girls in developing countries.

France, meanwhile, received plaudits in its OECD review, released just days after Canada's. It said France had increased foreign aid by 15 per cent in 2017 to 0.43 per cent of gross national income, restoring its spending to past levels after years of "steady decline."

"The French report is very significant because it shows a young leader committing his country's resources to make a very significant difference in Africa at a very critical time," said Robert Greenhill, a former managing director of the World Economic Forum and an ex-deputy minister of Canadian international development.

Greenhill said Canada will have trouble winning UN votes if it doesn't put "real resources behind its rhetoric, particularly around international assistance. This means not just shuffling funds from one pile to the other."

Liam Swiss, a development expert at Memorial University in St. John's, N.L., said Trudeau's remarks are aimed at his base in an attempt to brand his "Canada is Back" message.

"But given the structure of the Security Council, the vetoes for permanent members, and the seeming growing dysfunction of the international system, I am not convinced that attaining the seat will really be a means to a very different end than if Canada doesn't win it."

By The Canadian Press in News, US News, Politics | September 25th 2018