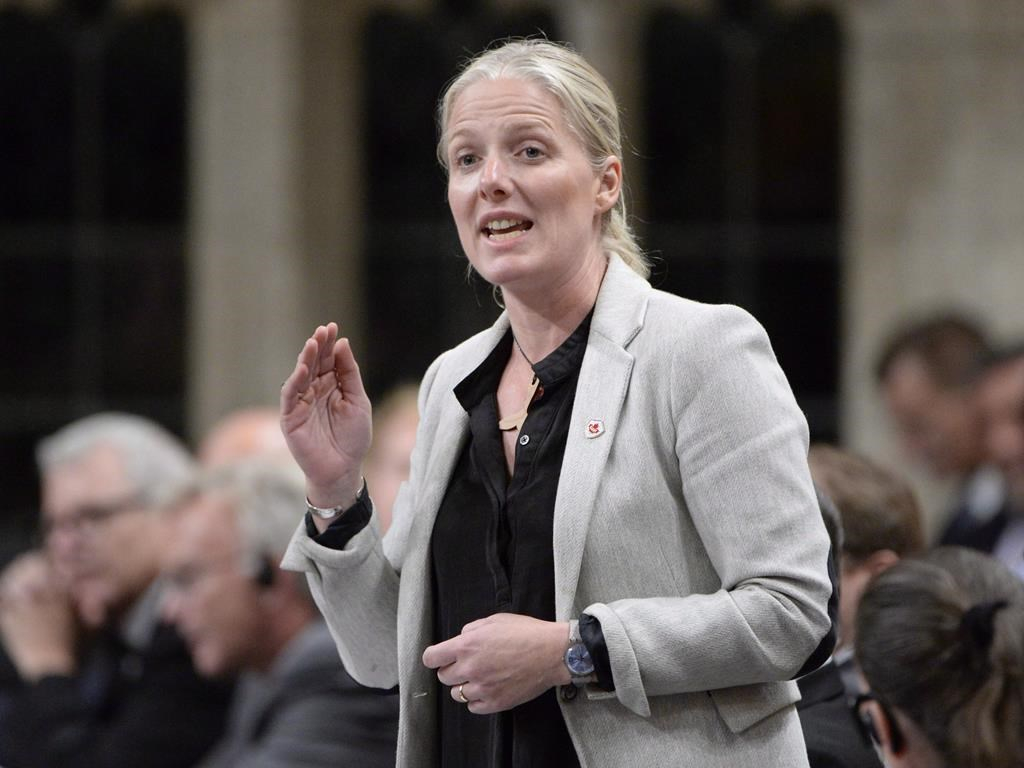 Environment and Climate Change Minister Catherine McKenna rises during question period in the House of Commons on Parliament Hill, in Ottawa on October 4, 2018. File photo by The Canadian Press/Adrian Wyld
Previous story

The world is going to blow past its most stringent climate goal in less than a quarter century unless the political will erupts to act faster and more directly to curb greenhouse gas emissions.

That's the key message in a new report released Sunday by the United Nations Intergovernmental Panel on Climate Change, which says meeting the ambitious goal "would require rapid, far-reaching and unprecedented changes in all aspects of society."

The report is a scientific blueprint for how the world can meet its climate change targets. However, it shows that right now the world is on track to warm up by 1.5 degrees Celsius above pre-industrial levels by 2040.

The world is currently warming up at about 0.2 C each decade, and has already warmed by more than 1 C compared to the mid-19th century.

The 2015 Paris climate change agreement set a goal to reduce emissions by the end of this century enough to keep the world from warming up more than 2 C compared to pre industrial times. But there was also a stronger goal to aim for 1.5 C.

Catherine Abreu, executive director of the Climate Action Network Canada, said the difference between 1.5 C and 2 C may not seem like much but it is actually "huge" when it comes to climate change.

Carbon Brief, a United Kingdom-based website focused on climate science and policy, reviewed 70 peer-reviewed climate studies. Based on that, it estimated Friday that at 1.5 C of warming, global sea levels will rise an average of 48 cm — but at 2 C that goes to 56 cm.

Next year the signatories to the Paris agreement are supposed to take stock of progress in meeting their national emissions goals. Canada is aiming by 2030 to curb emissions to 30 per cent below what they were in 2005. A year ago, Canada told the UN it was 66 million tonnes shy of that goal, despite all the policies and programs in place or planned. That's about what 14.5 million cars emit in a single year.

In an interview with The Canadian Press recently, Environment Minister Catherine McKenna said she knew the IPCC report would say "we're not on track to be hitting 1.5 degrees."

"We acknowledge this and we all know we need to do more," she said. "That's why the Paris agreement is set up the way it is. Every country in the world needs to take action, and then we need to be more ambitious about the action we are willing to take."

But Canada has no immediate plans to increase its own ambition. Instead, the focus is on implementing the current plans, which include a national price on carbon, eliminating coal-fired power plants, making homes and businesses more energy-efficient, and investing in clean technologies and renewable energy.

Blair Feltmate, head of the Intact Centre on Climate Adaptation at the University of Waterloo, said the UN report may "serve as a wake-up call" for some governments. However, he was a bit disheartened at a recent meeting of the G20 climate group in Argentina, where he found most countries were committed to cutting emissions only "at their own pace, without affecting their economies."

"Effectively, what they're saying is the probability of them living up to what they committed to under the Paris accord is negligible to zero," said Feltmate.

The takeaway for Canadians in the report should be the need to not just accelerate emissions cuts, but also to accelerate efforts to protect their homes and businesses from the floods, forest fires and storms that climate change is already bringing with more frequency and more force than before, he said.

The IPCC report comes just days after German environmental non-profit Urgewald published its latest update on the world's addiction to coal. That report says there are 1,380 new coal plants being planned or already in development in 59 countries around the world. If they're all built, the amount of electricity produced from coal will grow by one-third.

Abreu said Canada could play a role internationally on the coal front through its joint anti-coal initiative with the United Kingdom.

Many of the countries adding coal power are doing so to bring electricity to people who don't have access to secure power sources now. Abreu said telling India it can't build power to lift people out of poverty is not the solution, but countries like Canada could step up to help India build cleaner sources of power.

Canada last week announced it was going forward with a $40-billion liquefied natural gas project in British Columbia. Although many environmentalists don't want more natural gas produced or burned either, exporting it to places like China to replace some of their coal would help emissions go down.

Would you please reconsider

Would you please reconsider posting Canadian Press reports like this. The last statement about China using "cleaner" natural gas instead of coal is scientifically incorrect and perfectly matches the federal governments' propaganda on LNG. Canadian Press has a habit of always watering down stories about climate change.

As I see it and I'm not the

As I see it and I'm not the only one, our Canadian Federal Government is blatantly ramping up ever more fossil fuel extraction. They're now bragging they have Premier Horgan of BC onside with implementation of a mega LNG/Fracking industry. We've come a long ways from those heady pre election days when Mr. Trudeau was promising to wean Canada off of fossil fuels. His most recent spin has seen increased extraction. To what end? Not to sell to Canadians, rather the rest of the world. Our part in this? To pay the carbon taxes associated with the increased carbon footprint our federal government is directly responsible for.

Gosh, David, that comment sounds an awful lot like a conspiracy theory. Did you mean it to, because, if so, one has to applaud the creativity.

I'd prefer to call it factual

I'd prefer to call it factual reporting....without the media/governmental sugar coating.

The thing to remember, too,

The thing to remember, too, is that these predictions, that sound so precise, keep getting revised as further research reveals it's worse than we thought it was. New tipping points, new feedback loops, rates of melting that weren't expected for forty years show up in ten, that kind of thing.

Women must be at forefront of global climate action