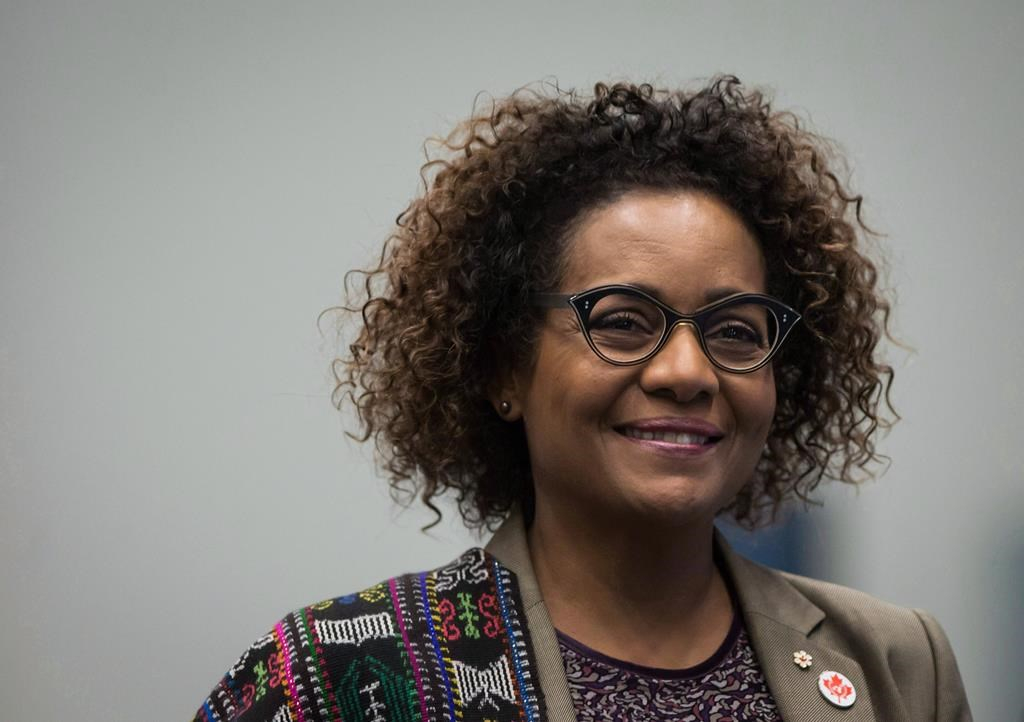 Secretary General of La Francophonie Michaelle Jean walks to the podium to address a youth as peace builders working session at the 2017 UN Peacekeeping Defence Ministerial conference in Vancouver, B.C., on Nov. 14, 2017. File photo by The Canadian Press
Previous story
Next story

Several observers believe Jean has only the faintest of hopes of being chosen for a second mandate when the organization of French-speaking nations chooses a new secretary general this week in Armenia.

But Jean, who has been in the role since 2014, has no intention of giving up, according to her spokesman.

"I confirm she'll be there until the end and probably beyond," Bertin Leblanc said in an email.

Over the past few months, Jean has vigorously defended her record, lambasted what she called the "smear campaigns, disinformation and defamation" from members of the media who accused her of excessive spending, and promised to modernize the multilateral organization's administrative practices.

But in Mushikiwabo, she's facing a candidate whose lead increasingly seems insurmountable. The Rwandan minister enjoys the support of France as well as the all-important African Union.

But beyond that, there are also a number of geopolitical factors that are increasingly lined up against Canada's former governor general, experts say.

"(French President) Emmanuel Macron wants to re-centre, reposition France within la Francophonie, and he sees a Francophonie that is much more about the cultural promotion of French and learning French, while Michaelle Jean and others see a more politicized role," said Martin Normand, a postdoctoral researcher at the University of Ottawa.

"France is determined to maintain and consolidate its status as the first major power in Africa," the researcher said.

Yet another factor, he said, relates to Canada's own ambitions.

"Ottawa is thinking of its campaign for a seat on the UN Security Council," he said.

"The votes of Africans will be decisive. Fighting an African candidacy would be wrong."

As for the reports of Jean's excessive spending, Normand doesn't think they factored into her re-election bid.

"I don't know to what extent the controversy (on spending) has resonated outside of Canada," he said. "The story has hurt Michaelle Jean's reputation in Canada more than internationally."

The alleged expenses, which were reported by Quebecor media outlets, include a $500,000 renovation to her rented Paris residence and a $20,000 piano.

The Rwandan candidate, for her part, has also had to endure criticism over her country's human rights record and for choosing to replace French with English in its teaching curriculum in 2010.

However, Coulon points out that some 20 of la Francophonie's 54 member states are dictatorships or authoritarian regimes, and Jean appears to have been able to work with them.

If Mushikiwabo is victorious, the world's French-speaking nations organization will be led by someone from a country where less than one per cent of the population speak French — chosen at a summit in Armenia, where the percentage may be even lower.

Many of the organization's 84 members, associates and observers do not have French as their official or common language, which raises the question: what purpose does it serve, and why do non-French speaking countries want to join?

It's all about the power of networks, Normand answers.

"French remains the second international language, and there are countries who want to rely on French to integrate into international networks," he said.

"There may be countries in there that have trouble dealing with English and the Commonwealth and who see an alternative in la Francophonie."

The member organizations of la Francophonie will choose its leader at a summit in Armenia on Oct. 11-12.

Why would Michaelle John

Why would Michaelle John think half a mil for renos and a piano that is beyond grand appropriate expenses for an organisation having many members from countries that are economically struggling?