Doug Ford should create a climate plan and not fly across the country to oppose one: Dominic LeBlanc 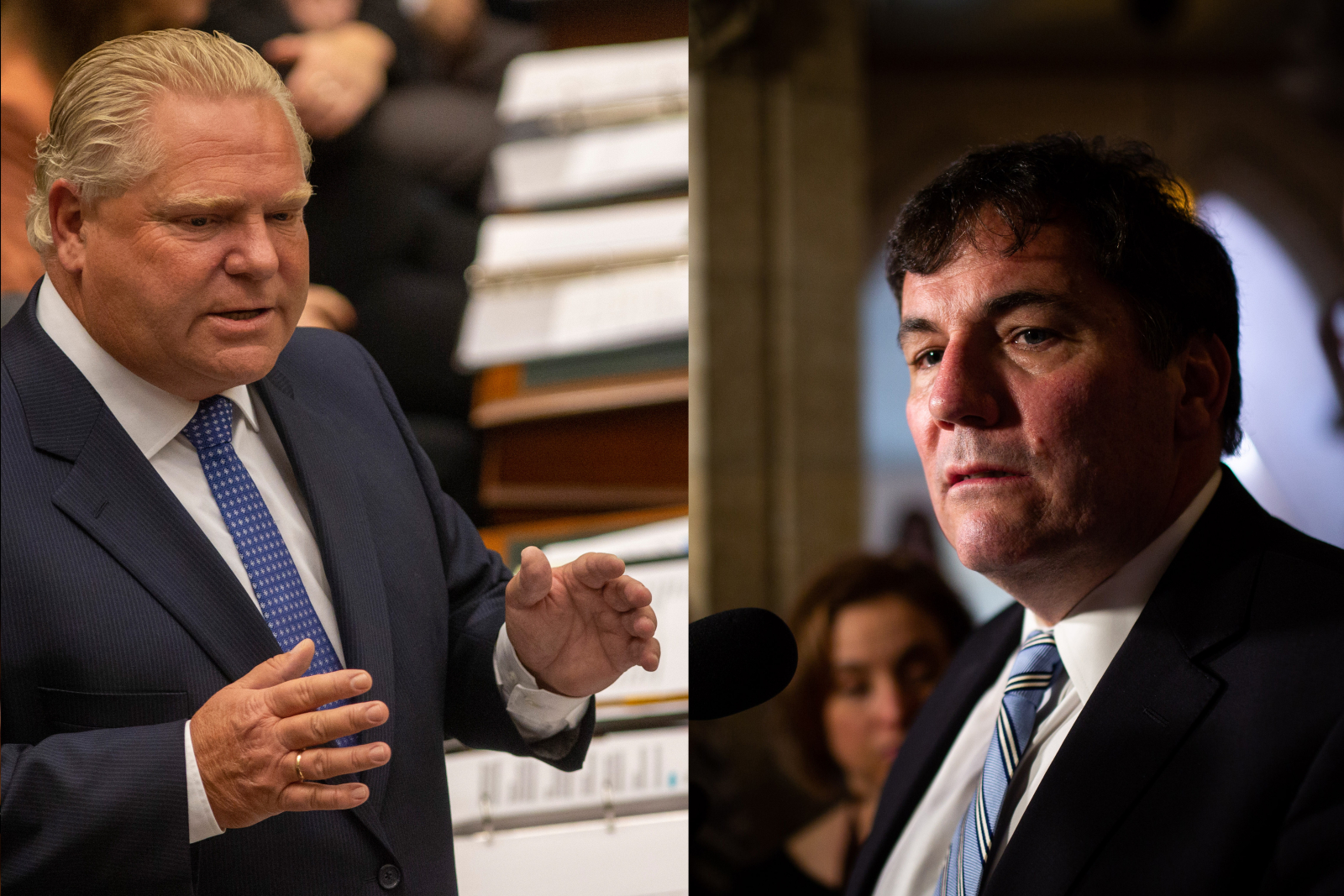 Ontario Premier Doug Ford has turned to the public for help in drafting a new climate plan — news that one Trudeau government minister found surprising in light of his strong opposition to a federal plan to price pollution.

Federal Intergovernmental Affairs Minister Dominic LeBlanc said he was "surprised" Thursday during his first trip to Toronto in his new role after listening to question period at Queen's Park, where Ontario Environment Minister Rod Phillips assured the provincial legislature that a Ford-approved climate plan is forthcoming, while also announcing that for a two-week period between Oct. 18 and Nov. 1, Ontarians can submit their ideas for such a plan via a newly-updated website.

In response to NDP Leader Andrea Horwath's question about why Ford's PC government was being so secretive about their climate policies, Phillips said "we are of course going to have a climate plan."

"Now Ontarians can give us contributions to that at ontario.ca/climatechange, where we’re collecting information on the climate plan."

The contradiction was not lost on LeBlanc.

"They don't seem to have a climate plan," he told reporters outside the legislature on Thursday, adding that the federal government would have more to say about this in the coming weeks.

"I was surprised to see during question period they're acknowledging that they don't have a climate plan, but they certainly have a lot to say about our effective climate plan."

LeBlanc spoke to media after question period, in which Phillips continued to take shots at the federal government's carbon pricing plan on Thursday, this time with LeBlanc in the room.

"Mr. Speaker, with respect to our visitor in the gallery: I’m not sure what they’re smoking up in Ottawa, but this is not going to fly with Ontarians," Phillips told the legislature.

He said a report by Ontario's fiscal watchdog released on Tuesday found that the federal scheme, which Phillips called "a Trudeau carbon tax," would cost $648 by 2022.

While @JustinTrudeau won’t tell Canadians how much his #CarbonTax will cost them, the FAO revealed Ontario households will pay $648/year by 2022. Families can’t afford this. We will challenge the federal governments authority to impose this unconstitutional tax. #ONPoli #CDNpoli pic.twitter.com/ST65vV9mWD

Recent international reports and agreements have shown that the cost of taking action to address climate change is low in comparison with the cost, in the trillions of dollars, of having to adapt to a more violent climate in the future.

In July, the Ford government said all of the programs funded by cap and trade would be cancelled. The watchdog report also said the cancellation would worsen Ontario's deficit by $3 billion.

But despite the government’s announcement, the provincial financial officer's report also revealed that not all programs were canned.

On Thursday, Phillips admitted that, while "an orderly wind down" of all the programs were underway, those pertaining to transit and housing would be continuing until the end of October.

Once they end, "there will be further reporting on the details," Phillips said.

"We will make sure that Ontarians, unlike the previous government, see where the money has gone and they see that cap-and-trade is gone and that a carbon tax doesn’t replace it."

Phillips comments were top of mind when LeBlanc spoke to reporters after question period.

Ford also went to Saskatchewan to meet with Premier Scott Moe on the same topic.

In August, Ford attended the federal Tory policy convention in Halifax, where he told delegates that uniting behind federal Conservative Leader Andrew Scheer would be key to the Tories winning the 2019 federal election.

"You get a four-year job and you're 10 per cent into it and you're already looking to upgrade to go somewhere else, I cant imagine that's very constructive," LeBlanc said.

"If I was worried about a problem with my children's education in a public school in Ontario, or I was on a waiting list in a hospital, I might find it more useful to see the premier here worrying about those issues than see the premier in Alberta."

LeBlanc was in Toronto to meet with Jim Wilson, the Ontario minister of economic development, job creation and trade, about interprovincial trade. The meeting was a "positive discussion," LeBlanc said.

Their conversation did not include any talk of the disagreements over cap and trade or carbon pricing plans, both he and Wilson confirmed.

"We shouldn't be traumatized or destabilized because a liberal federal government does not agree with a provincial conservative government on every issue," LeBlanc said.

"We’ve said publicly that Mr. Ford and Mr. Scheer want to advocate the policies that we think don't deal with significant issues like climate change or want to quickly resort to the notwithstanding clause, a rather extraordinary measure, which we thought was unwise and said so, then we’re prepared to say that publicly."

Dominic is nobody's role model. He and Trudeau were both found guilty of a conflict of interest and neither to my knowledge ever suffered a penalty. Seems to be the Liberal, sunny way. I wish them the best on October 21, 2019.

….and Mr. Trudeau should lay

….and Mr. Trudeau should lay off the plane trips too.