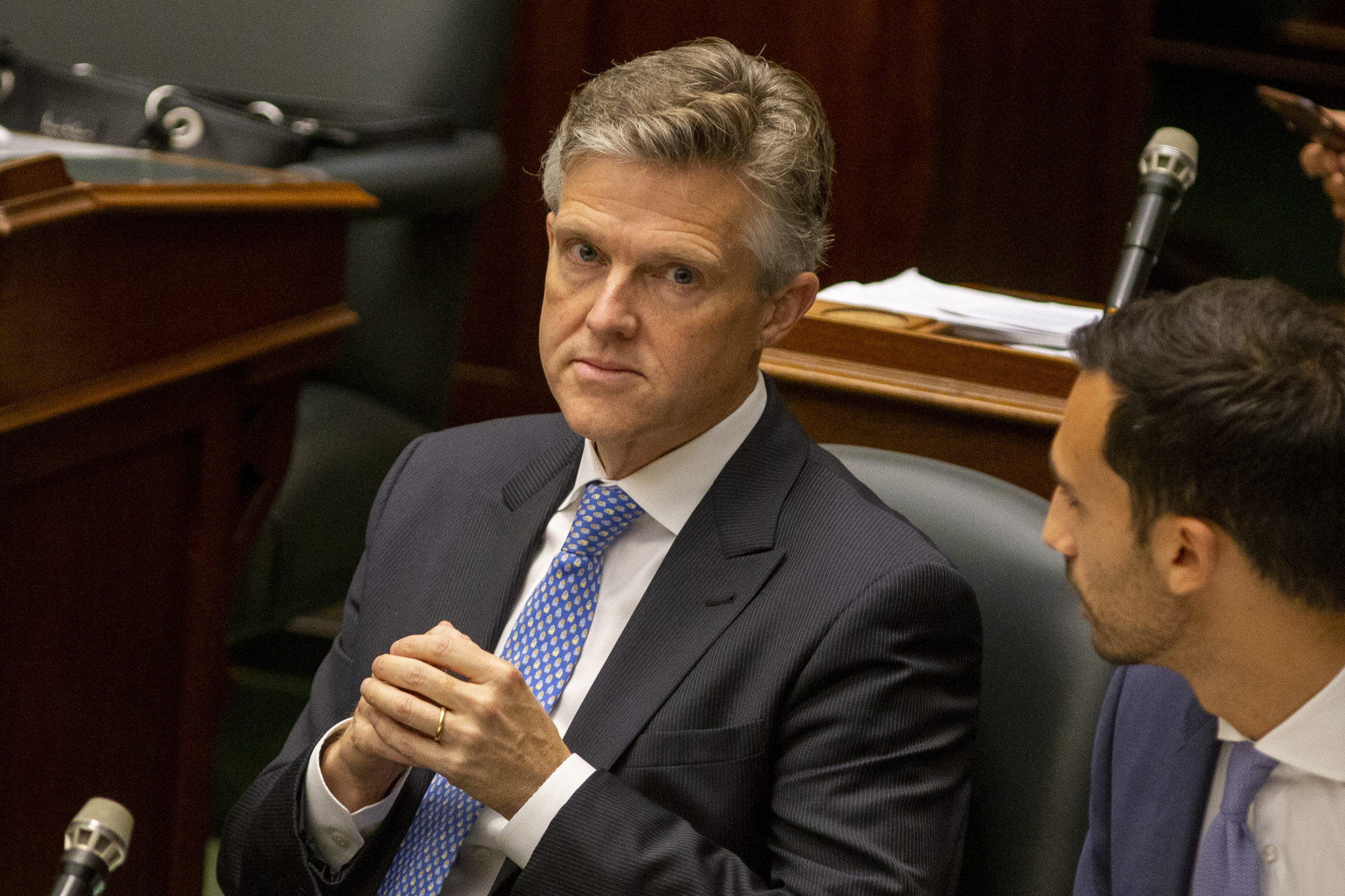 Ontario’s deficit will grow by $3 billion as a result of Premier Doug Ford’s decisions to undo the province’s climate change policies, says a new independent analysis.

The report, released on Tuesday by the province’s Financial Accountability Officer, said the losses have already begun: Ontario’s “budget balance is expected to deteriorate by $841 million” in the first fiscal year of cancellation alone.

“This deterioration in the province’s budget balance occurs because the loss of cap and trade revenues will exceed the savings from cancelling the related spending programs,” Peter Weltman, the accountability officer, told reporters at Queen’s Park.

The province will incur significant costs in the wind-down of the cap and trade system amounting to $600 million, Weltman said, and another $5 million in compensation costs for businesses.

The report notes that less than one per cent of the credits bought by companies are being reimbursed by the government. It also found that most of the companies that are not being compensated have already passed on these costs to consumers.

Annually, cap and trade revenues were set to raise $1.9 billion that were designated for greenhouse gas reduction projects, such as retrofitting social housing, schools and subsidizing electric vehicles.

One of the cancelled programs was Ontario’s participation in an international market with Quebec and California, commonly referred to as cap and trade. This system allowed businesses to meet emissions targets by buying and selling allowances, initially auctioned off by the government, and then sold at a price set by the market.

The auditor’s report, which was prompted by a request from Opposition Leader Andrea Horwath, projected that Ontario families will pay $264 in 2019 – $4 more than the premier said they’d save when the legislation was first announced in July.

Ford’s decision to cancel the cap and trade program put Ontario at odds with the federal government's commitment to ensure that all provinces set a minimum price on heat-trapping pollution to ensure that businesses and citizens are no longer allowed to pollute for free.

Scientists, economists and governments around the world have agreed in international reports and agreements that the cost of taking action to address climate change is much lower than the cost of doing business as usual. But, in July, the Ford government said all of the programs funded by cap and trade would be cancelled.

Despite the government’s announcement, the FAO report revealed that not all programs were cancelled. But the office says it wasn’t able to identify them because it “cannot disclose the remaining cap and trade related spending programs as the province has deemed this information to be a cabinet record,” which must be kept secret. Weltman estimated the remaining programs account for $500 million of planned cap and trade spending this year.

​​Weltman also noted that there were many unknowns that could impact the financial costs of the cancellation moving forward, including how a forthcoming federal carbon-pricing scheme (set to begin on January 1, 2019) would be distributed. The Trudeau government withheld $420 million in transfer payments from its Low Carbon Economy Fund from Ontario shortly after the Ford government first announced it was pulling the province out of cap and trade and winding down renewable energy programs. Whether this money will be sent in rebates directly to households is under consideration and could impact the FAO’s financial cost assessment.

“The federal government has not yet indicated how revenue from non-compliant provinces would be recycled, would be put back in the system,” Weltman told reporters Tuesday. “How the backstop revenue is used would determine the net impact on households.”

Nonetheless, Weltman said that efforts to balance the province’s budget, already at $15 billion, have become “more difficult,” in light of this report.

.@infoFAO “Cancelling the cap and trade program will worsen the ON’s budget balance by a total of $3 billion over the next four years.” https://t.co/RpNm0tOgfL #onpoli

“If it’s something that hits the deficit and hits the province’s budget deficit, then the province needs to borrow money to fund that and the taxpayers ultimately pay those debts,” he said.

Phillips says province has more work to do

Moments after the report was made public, NDP MPP Peter Tabuns pressed Environment Minister Rod Phillips in the legislature about how the government would address the increased deficit, describing the Ontario government’s actions as a "$3 billion mess."

Phillips responded by staying on message. The $3 billion dollars assessed by the province’s fiscal watchdog was “$3 billion back in the pockets of Ontario’s taxpayers,” he said, proceeding to cite selective sections of the report that illustrated the short-term financial gains the cancellation of cap-and-trade would result in according to the report to defend the government's decision.

“We committed to the orderly wind-down of this program that was killing jobs, that was regressive, and we will follow that through. It’s a promise we made. It’s a promise we’ll keep,” Phillips told the legislature. “Some $264 per family is confirmed in this report today. Yes, that means less money for government; that’s more money for families. We’ll talk about that all day.”

Phillips reiterated that the government "believe(s) and understand(s) climate change is important,” but they “will not punish Ontario's families.” He promised to release a "made-in-Ontario plan that will balance the economy and the environment."

Last week, the United Nations Intergovernmental Panel on Climate Change predicted there are 12 years to contain global warming to a maximum of 1.5C or risk further extreme weather occurrences.

Outside the legislature, Phillips told reporters he had seen the UN report (“It’s 700 pages, you know?”) and felt the province had more work to do in identifying local impacts. “It adds to the body of information around climate change overall,” he said, ”but we need to focus on dealing with the effects here.”

“What we have also learned, which is startling to me, is that there is no comprehensive risk assessment for the province of Ontario with regards to climate change. Shocking in a way,” he said. “When we take global studies we have to extrapolate.”

Still, Phillips deflected questions about what Ontario’s climate action plan would include. He admitted that there were some cap and trade programs that are still ongoing, including a window retrofit program. He said the government had been transparent with the FAO about what it is cancelling, and that it will create a plan that doesn’t include a “punitive carbon tax.”

Phillips also noted that the deficit calculations were due largely because of “accounting tricks from the previous government.”

Opposition leaders and MPPs worried that the oversize cost calculated by the FAO would result in spending cuts down the line that would hurt Ontario’s education and healthcare services and increase the burden on families.

Tabuns, who called cap and trade repeal “Doug Ford’s favour to big polluters,” in a statement expressed dismay outside the legislature. Today was the first time he had heard some of the cap and trade programs were still in place, and because of cabinet secrecy, he wasn’t allowed any more information.

“The fact that they’ve abandoned a plan that was not as good as it needed to be but doing something indicates to me they don’t have a sense of urgency about this,” he said. “In every way this is a step backwards in what’s needed to actually deal with climate change and Ontario’s finances.

Liberal interim leader John Fraser said that the absence of a repeal-and-replace system in Ford’s policy-making was setting a dangerous precedent for future legislation. “You can’t just tear things apart,” Fraser said. His colleague, MPP Nathalie Des Rosiers agreed, noting that Ford “cancelled it so quickly and without thinking.”

“It’s going to cost every family quite a bit of money,” she said, noting too how taxpayers will have to foot the $30 million bill for Ford’s legal challenge against the federal carbon pricing plan.

​​​​​​Schreiner has repeatedly warned about mounting losses caused by weather events. He has also warned about the threat of legal penalties triggered by claims from companies that bought the now worthless emissions allowances.

“The only climate plan we’ve seen from the premier so far is ‘I’m going to personally speak to companies.’ To me, that sounds like something a South American left wing dictator like (Hugo) Chavez or someone (like him) would do,” Schreiner told reporters outside the legislature.

Both Schreiner and Tabuns are on the government committee debating Bill 4, the Cap and Trade Cancellation Act. Schreiner noted that the organizations that had testified so far had expressed the importance of having a price on pollution and allowing the marketplace to solve the climate crisis.

“We can’t have the heavy hand of the government solving this,” Schreiner said. “If the premier personally goes and meets with companies...it will be expensive and it’s not the way Canadians do business.”

Members of the federal government, too, expressed their dismay that the Ontario government had yet to produce a climate plan that tackled the findings of the FAO report.

“Canadians expect their governments to have a plan to fight climate change. Like the Harper and Scheer Conservatives, the Ford government has no plan,” a spokesman for Dominic LeBlanc, federal minister of intergovernmental affairs, said in an email, noting that Ford’s decision to cancel the cap and trade program was “disappointing, but it’s not surprising.”

“Our government has a serious plan to grow the economy and create good middle class jobs,” he wrote.