Voters give Winnipeg mayor second term, say no to Portage and Main question 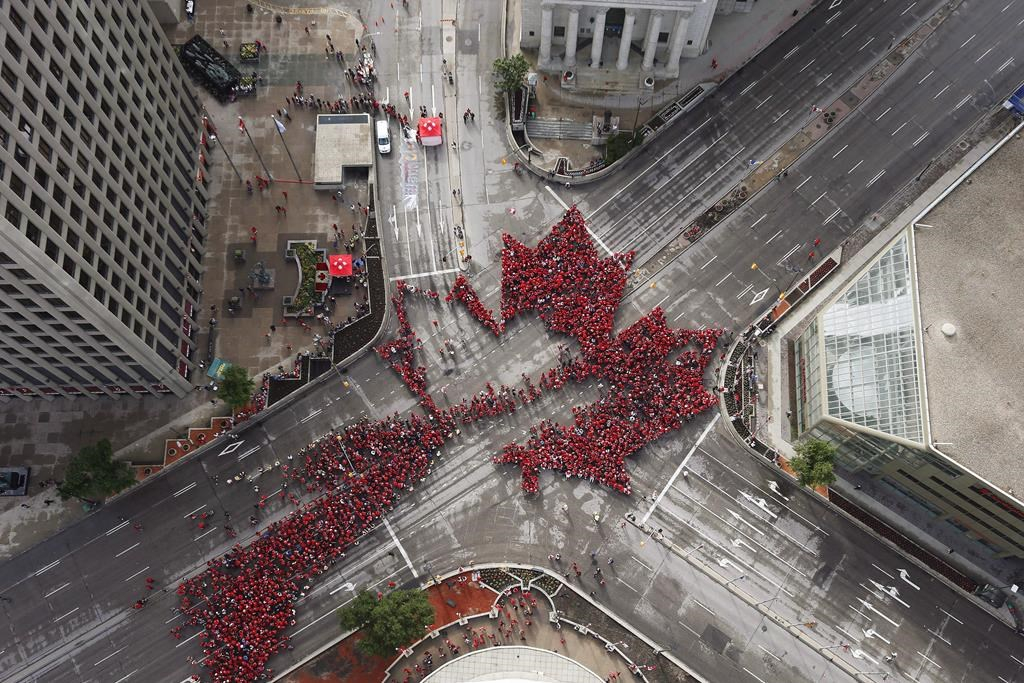 Winnipeggers got together today to celebrate Canada's 150th birthday by forming a "Living Leaf" at the historic downtown intersection of Portage and Main, on Saturday, July 1, 2017. File photo by The Canadian Press/John Woods
Previous story

Winnipeg residents have voted to retain their mayor and keep the city's landmark intersection closed to pedestrians.

Brian Bowman was elected to a second term Wednesday night, handily beating second-place Jenny Motkaluk, a business consultant who made her first attempt at the mayor's chair.

Voters also cast ballots in a non-binding plebiscite on whether to re-open the intersection of Portage Ave. and Main St. to foot traffic, and rejected the idea by nearly a two-to-one margin.

Bowman said he voted to open the corner — a windy gateway to the West which has been featured in song and postage — but will respect the outcome of the plebiscite.

"I'm not going to apologize for listening to Winnipegers and they spoke today pretty clearly," Bowman said after his victory speech.

Bowman campaigned in 2014 on a promise to open the intersection. But the idea ran into opposition from residents who said the move would cost millions of dollars and add to traffic tie-ups. He backtracked on his promise and backed a councillor who wanted the matter put to a plebiscite.

Concrete barriers have kept the downtown corner off-limits to crossings on foot for 39 years. Some residents said opening it would make the area more vibrant, boost business and be more accommodating to people with mobility issues.

Currently, people who want to cross the streets must walk a long block in either direction or navigate an underground circle that can confuse visitors. Access via elevators after business hours can be touch-and-go, and some people have expressed fear for their safety in the dark stairwells and walkways.

Vote Open Winnipeg, a group formed in the summer to push for the opening of the intersection, was disappointed with the result.

"We hope that future city councils will see the light and see the benefits of pedestrian traffic in the heart of our city," spokesman Adam Dooley said.

Across Manitoba, eight rural communities, including Winkler and Steinbach, were holding plebiscites on whether to allow cannabis stores to open within their boundaries.

In Brandon, the province's second-largest city, Rick Chrest was acclaimed for another term because no one ran against him. Winkler Mayor Martin Harder was unopposed as well.

In Portage la Prairie, incumbent mayor Irvine Ferris was re-elected over Erik Lee, a former construction company owner who jumped into the race days before the deadline.

Banning pedestrians from Portage & Main MAY improve traffic flows and convenience for transit and vehicles but it also without doubt tears the human heart out of the city core. Given the extended climate misery Winnipeggers endure it also appears that if the City wants to maintain its vitality and enhance its economy, it needs to drastically upgrade pedestrian mobility. In this day and age there is no excuse for dark and dangerous underpasses, non-functional elevators, escalators or failures to accommodate the mobility challenged.

When I think of city re-vitalization I think of the miraculous NYC Highline park and beautifully designed sparkling overpasses through which people pass, able to view the city beneath them and evidence to all of the city's life and spirit. Winnipeg should establish a competition to revitalize Portage and Main - both underground and overhead. Perhaps a city vehicular tax could fund the project?