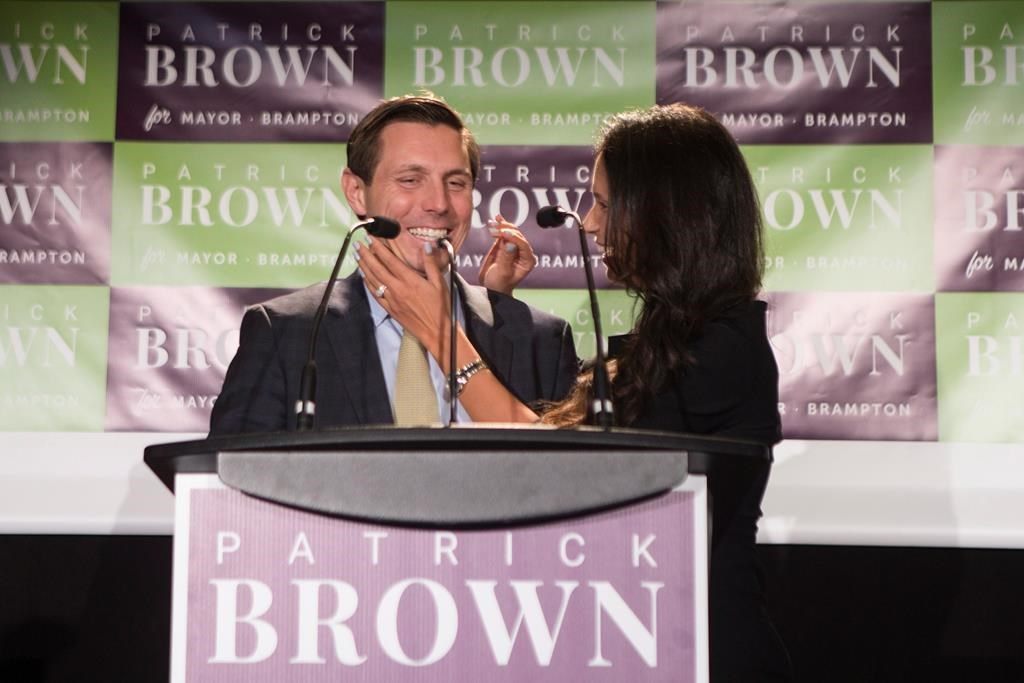 Brampton Mayor Patrick Brown stands on stage with his wife Genevieve Gualtieri after winning the Brampton Mayoral Election during a campaign celebration in Brampton, Ont. on Monday, October 22, 2018. Photo by The Canadian Press/Chris Young
Previous story
Next story

Months after sexual misconduct allegations forced him to step down as leader of Ontario's Progressive Conservatives, Patrick Brown has made a political comeback — this time as a city mayor.

The embattled politician has defeated Brampton Mayor Linda Jeffrey, a former provincial Liberal cabinet minister who was backed by several high-profile politicians, including some of Brown's former colleagues.

Jeffrey, who called Brown a political opportunist during the campaign, appeared shocked at her loss.

"Tonight's results were not what, I think, any of us expected. We fought a hard and challenging race," she said in her concession speech. "I can confidently say that our city is in better shape than when I found it."

The municipal election in the city northwest of Toronto was Brown's latest attempt at resurrecting his political career after his dramatic resignation in January amid allegations he has vehemently denied.

As the party sought to choose his successor, Brown threw his hat in the ring, only to withdraw before the vote. Doug Ford, who became Progressive Conservative leader after a turbulent party convention, took the Tories to a majority win in the spring provincial election.

The 40-year-old politician has also taken legal steps in an effort to move past the scandal that erupted when CTV News reported the allegations made by two women. The former Tory leader is suing CTV News for defamation, although the broadcaster has said it stands by its reporting and will defend itself in court.

Brown is also writing a tell-all book about what he has described as his "political assassination."

But his days at the provincial legislature remain under scrutiny, and a government document leaked to the media just days before Monday's vote has drawn criticism about his spending.

The document showed Brown spent nearly $300,000 on support staff and office operations after resigning as leader and being turfed from Tory caucus, though he defended the move in a statement, saying the expenses were in line with legislative rules and involved severance payments to staff.

Brown — who represented residents of Barrie, Ont., municipally and federally before becoming a provincial legislator for an area north of the city — recently moved to Brampton with his newly wed wife.

The sequence of events in the

The sequence of events in the Brown saga and the election of Ford raises deeply disturbing questions about the probity of the entire PC party apparatus. Brampton has now, unfortunately elected an experienced political operative/manipulator who may, nevertheless find himself up against a solid brick wall of resistance from his erstwhile party colleagues. Brampton had better not count on much provincial help or even cooperation during the current electoral cycle. The city and its voters had also better be sharply alert to the financial operations of the Mayor and Council and be wary of the impacts of this administration on female employees and businesswomen in the city. The rise of misogyny under these two "leaders" is well nigh inevitable.