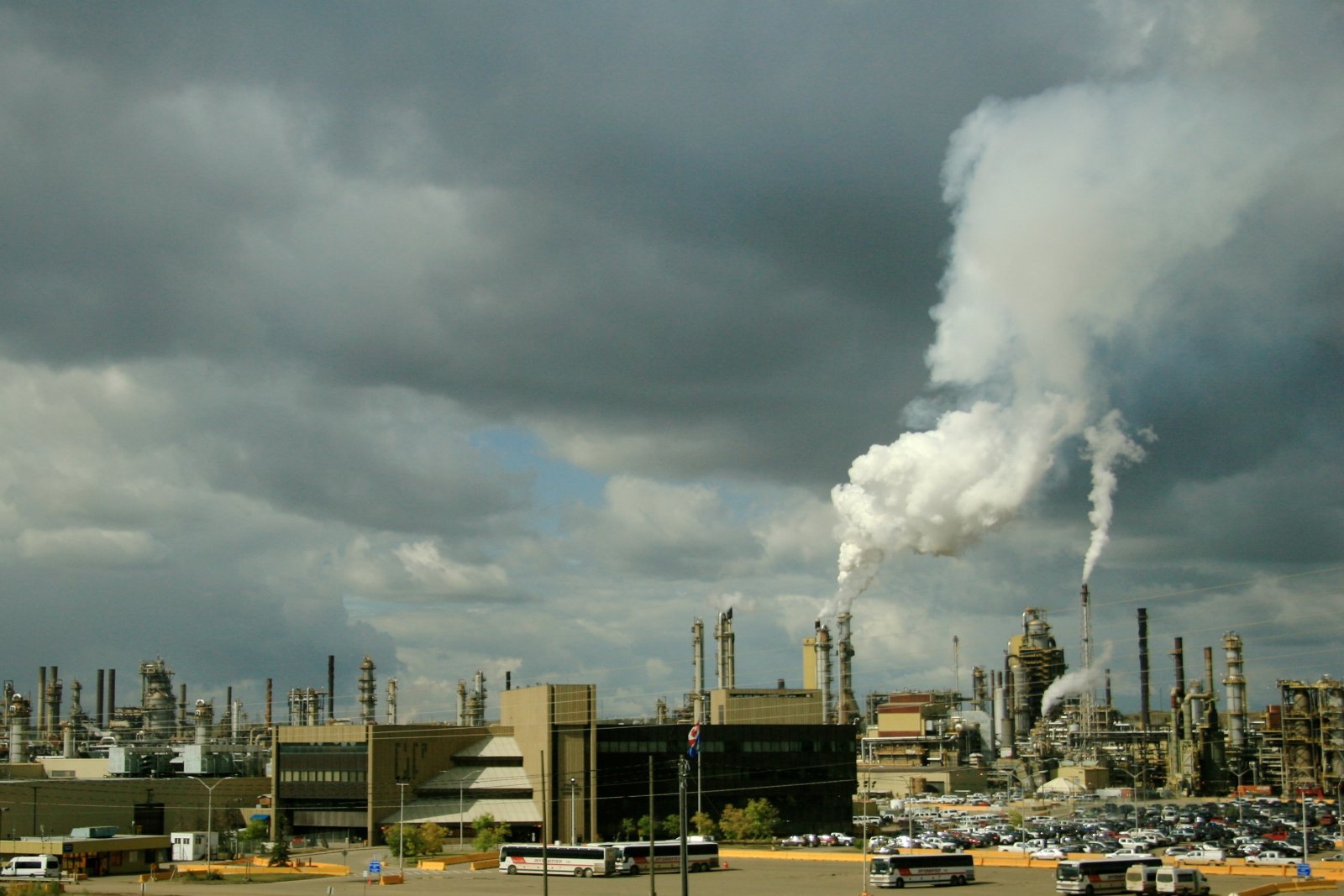 File photo of the Syncrude oilsands facility in Alberta. New York's attorney general alleged in a lawsuit that Exxon Mobil misled investors over its stake in the facility. Photo by Pembina Institute / Julia Kilpatrick
Previous story
Next story

But Canadian federal prosecutors and Imperial Oil are staying mum so far about the lawsuit brought by New York state Attorney General Barbara D. Underwood against Exxon, the Texas-based oil giant. The suit leans heavily on evidence related to its 14 oilsands projects in Alberta, run by Imperial, its Calgary-based subsidiary.

“Through its fraudulent scheme, Exxon in effect erected a Potemkin village to create the illusion that it had fully considered the risks of future climate change regulation and had factored those risks into its business operations,” the lawsuit reads.

Exxon, with roughly 70,000 employees and an enterprise value close to $500 billion, is one of the world's largest companies and a top global producer of fossil fuels. It depends heavily on its oilsands assets, according to the lawsuit, which made up nearly a quarter of its resource base as of February 2016. None of the allegations have been proven in court.

Fossil fuels create carbon pollution when they’re burned for energy, such as when powering cars with gasoline or heating buildings with natural gas. Carbon pollution traps heat and causes a rise in global temperatures, leading to climate change that is making natural disasters like wildfires and droughts more extreme and more frequent.

The world's top climate scientists recently said there only a dozen years are left to drastically cut society’s dumping of carbon pollution in the atmosphere and limit global warming to a maximum rise of 1.5 degrees Celsius above pre-industrial levels, in order to avoid climate change's more destructive effects.

The oilsands are the fastest-growing source of carbon pollution in Canada, and Alberta sits on the world's third-largest oil reserves after Saudi Arabia and Venezuela. Much of the material in the oilsands, crude bitumen, requires large amounts of energy to produce. "Exxon’s oilsands assets (are) very greenhouse gas-intensive, and are thus particularly vulnerable to climate change regulation," the suit stated.

In a carbon-constrained world, the oil industry would face serious challenges, based on projections by the International Energy Agency (IEA). Nearly two-thirds of fossil fuels must be left in the ground to prevent a two-degree rise in global temperatures, the IEA has estimated.

For years, Exxon marketed itself as a safe long-term bet to attract big institutional investors like life insurance and pension funds.

The lawsuit alleges the company told investors it was taking seriously the likelihood of its carbon pollution becoming increasingly monitored and controlled. It said it was applying an escalating “proxy cost” to its pollution in its business planning to protect it against all types of government actions or policies related to climate change. In reality, “Exxon often did no such thing,” Underwood said in a press release about the lawsuit. This meant the company understated its costs in its projections by approximately $30 billion, the suit reads.

Even after the company recognized that applying its publicly-acknowledged stronger costs to pollution would provoke huge write-downs, the lawsuit added, the company applied what it called an “alternate methodology” that assumed existing regulations would remain flat indefinitely.

For Exxon’s largest Canadian oilsands investment, Kearl, the company applied the “alternate methodology” that reduced projections by roughly 94 per cent or roughly $14 billion, the lawsuit alleges.

Exxon says on its website that its Kearl project "will help meet North America’s energy needs for the next 40 years." The suit said the company applied a cost of US$24 per tonne of emissions instead of the $80 per tonne it stated publicly, and "held that cost flat through the end of the asset’s projected life in 2065." It also applied it only to a small portion of its emissions.

"Exxon’s application of existing legislated costs cannot be squared with its numerous public statements that it was projecting that governments would impose increasing costs on greenhouse gas emissions over time," the suit stated.

At another location, Cold Lake, employees admitted its projected life was shorter by 28 years and 300 million barrels of oil equivalent, representing billions of dollars. "Exxon’s corporate planning department decided that a proxy cost should not be applied in assessing company reserves at Cold Lake," stated the suit.

"By not applying the publicly represented proxy costs, Exxon projected that it would be profitable for the company to continue producing at Cold Lake for a significantly longer period of time, which led the company to report inflated company reserves and resource base figures."

At the Syncrude joint venture, where Exxon has a 25 per cent interest through Imperial, "Exxon did not incorporate proxy costs into its cost projections when deciding to invest nearly $1 billion in 2011 and 2012," the suit stated.

"Exxon’s failure to inform investors that its proxy cost representations did not apply to massive and greenhouse gas-intensive joint ventures like Syncrude rendered those representations misleading."

“In reality, Exxon knew that its representations were not supported by the facts and were contrary to its internal business practices,” reads the lawsuit. “As a result of Exxon’s fraud, the company was exposed to far greater risk from climate change regulations than investors were led to believe.”

Greenpeace asks 'how many other companies?'

The investigation unfolded over more than three years and across two New York attorneys general. It utilizes the Martin Act, considered the most stringent anti-fraud law in the United States.

“The big question for me is, how many other companies are facing a similar dilemma, where they’re telling investors, ‘Don’t worry, our assets aren’t stranded,’ but they had to do some creative accounting to get that result?” said Keith Stewart, senior energy strategist at Greenpeace Canada, in an interview.

“I think governments and security regulators in Canada should be looking at the documents underlying this case, looking at the arguments, and saying, ‘Hey, do we need to be doing this same kind of due diligence?’”

Jon Harding, public affairs advisor at Imperial Oil, declined to take questions including those related to Canadian operations. In a response, he said “the issue is between the New York State attorney general and Exxon Mobil,” and forwarded an Oct. 24 statement made by the company.

The company’s statement called the New York Attorney General’s investigation "tainted" and "meritless," and sought to frame the allegations made in the suit as politically motivated by Democratic Party operatives and "activists."

"These baseless allegations are a product of closed-door lobbying by special interests, political opportunism and the attorney general’s inability to admit that a three-year investigation has uncovered no wrongdoing," Exxon's statement reads.

“The company looks forward to refuting these claims as soon as possible and getting this meritless civil lawsuit dismissed. There is no evidence to support these allegations, which come after a 2016 press conference by former New York Attorney General Eric Schneiderman, Al Gore and other Democrat attorneys general, a discredited media campaign and lobbying by anti-fossil fuel activists."

At one point last year, a key figure in the probe was an employee named Jason Iwanika at Imperial Oil. Court documents alleged that Iwanika "pushed back" against management instructions to break the corporation's internal policies.

The New York attorney general’s office acknowledged questions from National Observer about Iwanika and other aspects of the case but did not respond in time for publication.

Nathalie Houle, media relations advisor for the Public Prosecution Service of Canada, the agency responsible for prosecuting offences under federal jurisdiction, said the agency had "no information to provide."

Questions to Alberta Justice Minister Kathleen Ganley and the Alberta Securities Commission were not answered in time for publication.

The New York state attorney general’s lawsuit comes on the heels of other legal action against fossil fuel firms across the United States.

“Defendants have allegedly long known the threat fossil fuels pose to the global climate,” wrote Alsup in his decision. “The issue is not over science. All parties agree that fossil fuels have led to global warming and ocean rise and will continue to do so, and that eventually the navigable waters of the United States will intrude upon Oakland and San Francisco.”

But, he added, “it remains proper for the scope of plantiffs’ claims to be decided under federal law, given the international reach of the alleged wrong.”

Another lawsuit early this year by New York City sought damages from Exxon and the same other firms for billions of dollars that the city expected to spend to protect against climate change. The mayor’s office said at the time that the city was already spending over $20 billion on climate change resiliency programs.

U.S. District Court judge John F. Keenan also dismissed that lawsuit in July along similar lines: while Keenan wrote that "climate change is a fact of life” and “not contested by defendants,” he added the issue “must be addressed by the two other branches of government," in other words the federal Cabinet and U.S. Congress.

I am what might be called a micro, if not nano, investor. My fossil fuel holdings and oil patcch infrastructure stocks are minuscule but I am in the process of dumping all of them and hunting for sustainable replacements. When will the BIG investors wake up to the true values of their petro-related investments. At this point, over the long term I think those investments are worth zilch.