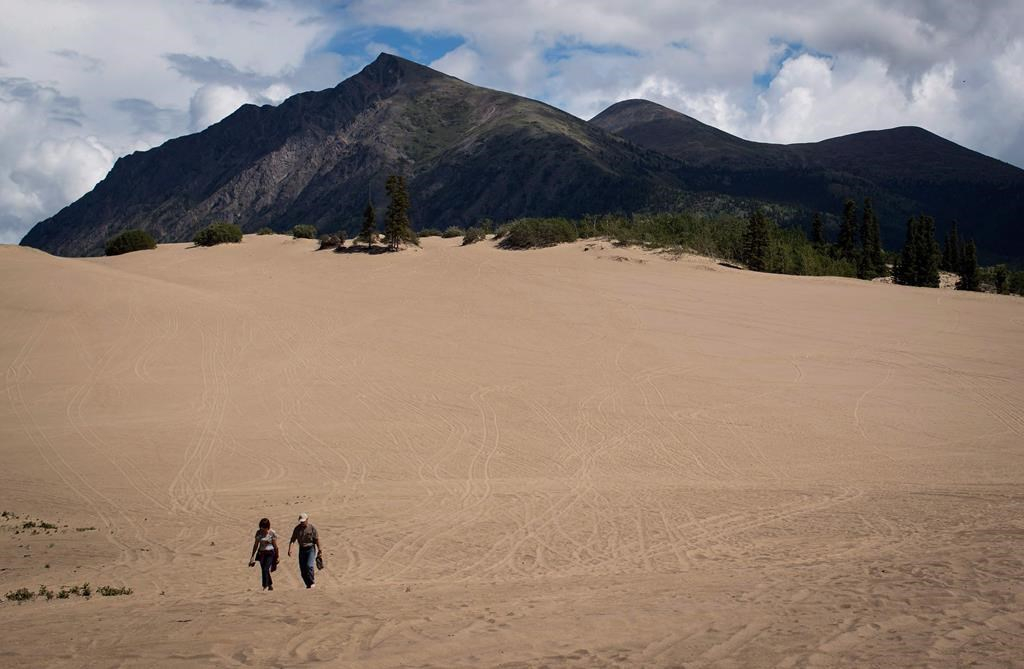 A woman and man walk on the Carcross Dunes in Carcross, Yukon, on Monday, July 2, 2018. File photo by The Canadian Press/Darryl Dyck
Previous story
Next story

Researchers who have produced a map of the world's remaining intact land and ocean areas are urging international delegates at an upcoming meeting on biodiversity to set a target and push governments to conserve what's left of the wild.

Oscar Venter, associate professor of forestry in the ecosystems science and management department at the University of Northern British Columbia, said the map shows human activity has encroached on 87 per cent of the ocean and more than 77 per cent of Earth's land, excluding Antarctica.

"There's normally this idea that wilderness is kind of remote and it's far from people and it's safe but through our work we've shown this is really not the case," he said.

He said the 14th gathering of a biodiversity convention, hosted by Egypt and involving 190 nations later this month, should include a mandated global target beyond 2020 to save all remaining intact ecosystems.

Venter and scientists from Australia and the United States have outlined their concerns in a paper published in the journal Nature.

They say a century ago, only 15 per cent of Earth's land was used to grow crops and raise livestock and between 1993 and 2009, an area larger than India — 3.3 million square kilometres — was lost to human settlement, farming, mining and other industries.

As for the ocean, the only areas that are free of industrial fishing, pollution and shipping are almost completely confined to the polar regions, say the authors.

Their mapping methods for terrestrial wilderness included data such as population density, night-time lights and major roadways and indicators such as fishing, fertilizer run-off and industrial shipping to determine ocean ecosystems.

The authors say more than 70 per cent of the world's remaining land mass is in five countries: Russia, Canada, Australia, the United States and Brazil.

Venter said those countries have a role to play in preserving wilderness, including the boreal forest of Canada, which could be impacted by climate change according to the Prairie Climate Centre at the University of Winnipeg.

However, recent gutting of environmental regulations in the United States and possible exploitation of the Amazon under Brazil's new president are adding to the urgency for nations to take action.

The authors say the steps that countries take, or do not, to limit the expansion of roads and shipping lanes and to reduce large-scale developments in mining, forestry, agriculture, aquaculture and industrial fishing will be critical.

"This is a very important time to raise awareness about the value of these systems, about how imperilled they are and to help decision-making that balances human needs and environmental needs and think strategically about where we develop and how we develop," Venter said. "I don't think the conservation community is calling for no development, we're calling for strategic development, and development that's both sustainable ecologically and socially."

Wilderness areas with pure water, uncontaminated fish stocks and a high abundance of game species are also important for the livelihood of the world's Indigenous people, who must be consulted, Venter said, adding governments in Brazil and Australia have high levels of involvement by Indigenous communities in their decision-making.

"I think that's the model we really need to look to in Canada," he said.

First Nations who fought a five-year legal battle to protect the Peel watershed in Yukon won a Supreme Court of Canada victory in 2017, forcing the government to consider an independent commission's plan to save 80 per cent of the swath of pristine sub-Arctic wilderness from development.

Jay Ritchlin, the David Suzuki Foundation's director for Western Canada, said the mapping of remaining wilderness areas is a clear signal for governments to create policies that support people and the environment.

"Right now there isn't really an incentive to be efficient. It's just go to the next undisturbed place and take more," he said.

Ritchlin noted one example of action that made a difference in the waters of Howe Sound, northwest of Vancouver, where pollution from pulp mills and mining had created a "dead zone" for decades.

"Now we have a thriving ecosystem starting to return there. We have herring and porpoises and a return of killer whales to this area that had been devoid of those things for 50 years."

Dozens of scientists from over 20 countries explain how mining, logging and fossil fuels disrupt the water on earth

By Carl Meyer | News, Energy, Politics | July 12th 2018
Reports from the Race to a Safer World

By Bob Weber | News, Politics | January 8th 2018
Reports from the Race to a Safer World

I'm so glad Ms Bains adds doubt about the situation in Brazil! If the new president carries out his campaign promises, the country - and specifically the Amazon - are in BIG TROUBLE!!!