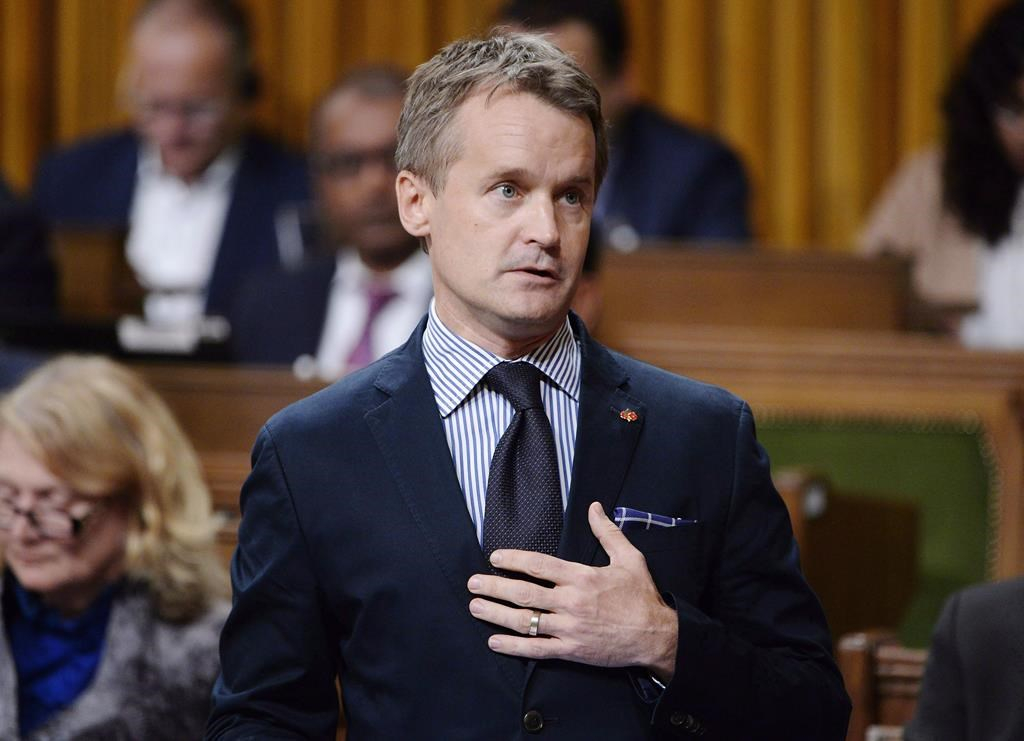 Minister of Veterans Affairs Seamus O'Regan rises during question period in the House of Commons on Parliament Hill in Ottawa on Thursday, Sept. 27, 2018. File photo by The Canadian Press/Adrian Wyld
Previous story
Next story

Repaying hundreds of thousands of disabled veterans and their survivors for a calculating error that deprived them of some of their pensions for seven years will cost $165 million, the federal government says.

Veterans Affairs Minister Seamus O'Regan revealed the error and compensation package Monday, on the eve of Remembrance Day, even as the federal NDP called on the government to ensure all money earmarked for veterans' benefits is actually spent.

O'Regan's department miscalculated adjustments to the disability pensions of 270,000 veterans, RCMP members and their survivors between 2003 and 2010 because it didn't properly account for a change in personal tax exemptions, he said.

"Most individuals will receive a few hundred dollars, while the maximum amount to be paid would be a couple of thousand dollars," he said.

The miscalculation was identified last year by veterans' ombudsman Guy Parent, who told The Canadian Press that his team stumbled upon the problem while looking at another issue and subsequently flagged it to the government.

While O'Regan promised that all veterans would be compensated, payments aren't expected to begin until 2020, which the minister blamed on the sheer number of Canadians affected by the problem.

Complicating matters is the fact as many as 120,000 of the affected veterans, notably those who served in the Second World War and in Korea, have died. O'Regan's spokesman, Alex Wellstead, said their survivors and estates will still be eligible.

Parent said the error would have had a disproportionate impact on low-income veterans from the Second World War and Korea who relied on their pensions, and while he couldn't say exactly how it happened, he hoped the government will ensure it is not repeated.

News of the error and compensation came as the New Democrats tabled a motion on Monday designed to pressure the Liberals to spend $372 million that's been earmarked for veterans' benefits in recent years but wasn't spent.

NDP Leader Jagmeet Singh said veterans have received inadequate assistance and faced barriers when it comes to accessing services and support for far too long because money approved by Parliament ends up going unused and being returned to the treasury.

The routine of letting money "lapse" needs to end, Singh said, which is why the NDP decided to use a rare opposition day to introduce a non-binding motion calling on the government to roll unspent money into budgets for the next year.

Members of Parliament were scheduled to debate the motion into the evening on Monday and vote on it Tuesday.

Successive governments have defended their inability to spend all the money set aside for veterans, saying they often ask Parliament for too much money to ensure there isn't a shortfall when former service members need assistance.

O'Regan was to make the same point in the House of Commons on Monday night, saying in prepared remarks: "Whether 10 veterans come forward or 10,000, no veteran who is eligible for a benefit will be turned away because we do not have the funds.

"If a veteran is eligible for a benefit, they get it. When that pendulum swings the other way and there are fewer veterans seeking a particular benefit; the money stays in the consolidated revenue."

Critics, however, have blamed the lapses on long wait times and other barriers that make it difficult for veterans to access services, and said the unspent money could be used to help veterans in a variety of other ways.

There also remains an ongoing issue with many veterans not knowing what benefits and services are actually available, Parent said.

"If you're going to allocate funds to administer and deliver benefits, you should make sure that the population that you're actually trying to help knows about it," he said. "If communications in Veterans Affairs Canada would be better, more people may apply for benefits and therefore there wouldn't be any more funds lapsing at the end of the year."

- with reporting by Janice Dickson

Most likely the "error"

Most likely the "error" happened because politicians, especially governing parties are always pressuring civil servants to find ways to lessen expenditures. A serendipitous miscalculation that can be buried in the arcane rules for taxation is a welcome bonus that escaped the eyes of successive auditors general simply becuase the auditors are probably unable to follow-up on every small anomaly. The largest cohort of aging pensionable veterans was a fruitful source to mine as they - like most of us - cannot make sense of the income tax documents and if unable to afford competent accountants who might challenge such errors, become profitable pigeons to pluck.