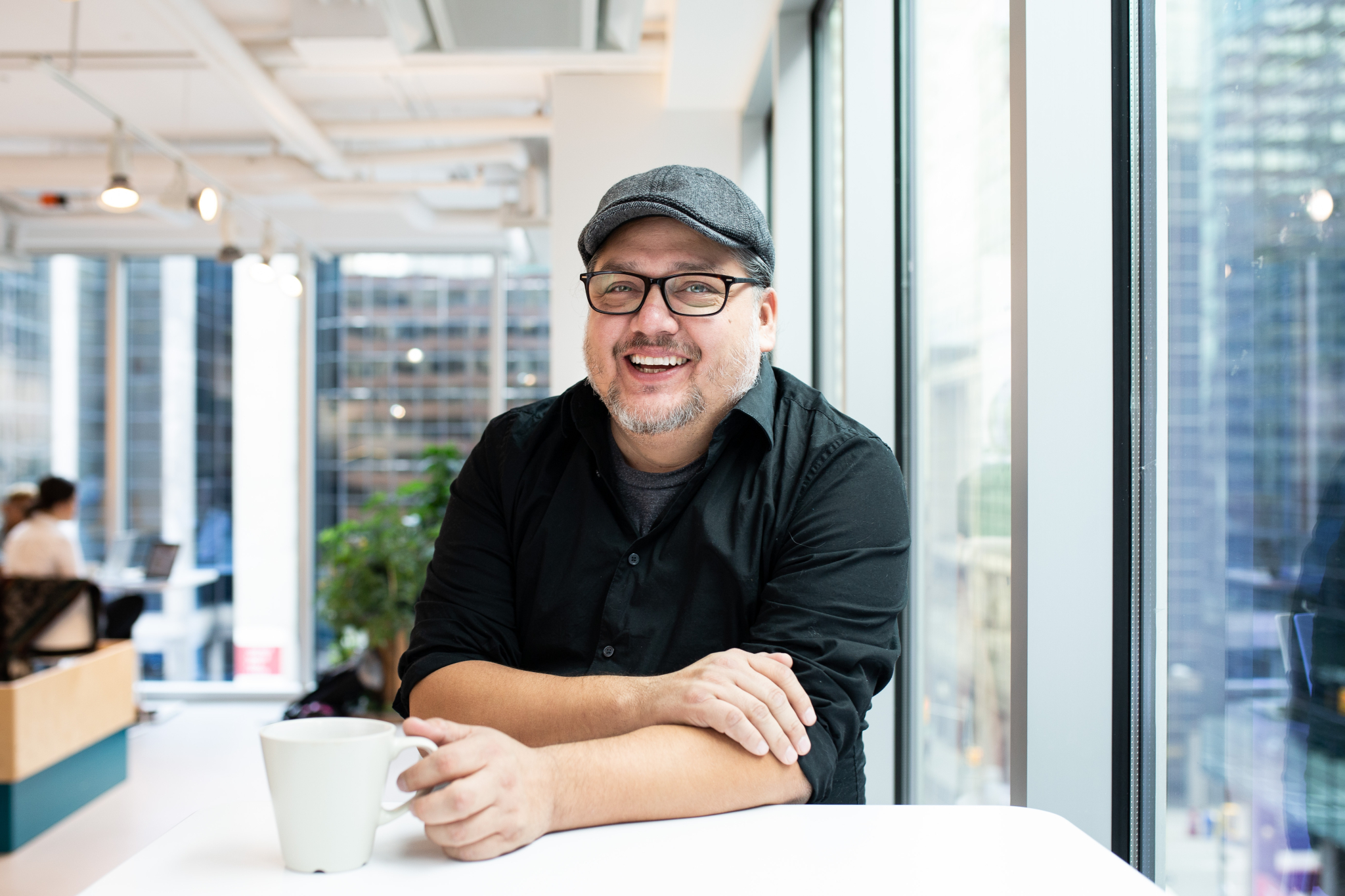 Tim Fontaine, the self-described Editor-in-Grand-Chief of Walking Eagle News, laughs over a coffee in Ottawa on Nov. 7, 2018. Photo By Alex Tétreault
Previous story
Next story

Some of it is inspired by jokes Tim Fontaine kept bottled up for years.

Some of it comes from comments that the former journalist thinks Indigenous people might make while they're watching the news.

And some of it is just plain silly.

This is how Fontaine describes his satirical Indigenous news outlet, Walking Eagle News.

Fontaine launched the site about a year ago after "walking away" from a lengthy career as a news reporter covering Indigenous issues in Canada for CBC and the Aboriginal Peoples Television Network (APTN).

Today, tongue firmly in cheek, he gives himself the titles Editor-in-Grand-Chief and Head Writer of "your finest source of Indigenous news, anywhere."

Walking Eagle News follows in the footsteps of such satirical news operations as the Onion and the Beaverton. But it is perhaps the first of its kind to do so from the perspective of Indigenous people.

As Fontaine told National Observer’s Carl Meyer during an interview in Ottawa, the seeds for Walking Eagle News were probably planted when he started writing serious articles in 1999, covering the news and working on documentaries.

"And then one day I had enough and I walked away from journalism in August of last year and lit my whole career on fire by starting this website,” he said with a chuckle. “Not right after I left, but eventually, that’s one of the things I did.”

"When you sit around with Indigenous people and you watch the news, you'll hear some of the comments that people make and that's really what this is," @anishinaboy told @ottawacarl in an interview about the prestigious @TheEagleist #cdnmedia

Fontaine says Walking Eagle has had more impact than his journalism

Initially, he wrote opinion pieces after leaving news reporting. At the same time, he was reading the book On Writing, by novelist Stephen King.

"So I figured, I'm going to start writing again, but everything that came out — because all I had done was online news for five years — everything seemed like news," Fontaine recalled.

Eventually, he realized he had a handful of "news stories" ready to publish, and opted to launch the new project.

"I started and I couldn't stop," he said. "It all came together in about a day. Basically, I built the site, I created the social media accounts, I had written about five stories that were ready to go."

The Editor-in-Grand-Chief says he has produced some 216 stories since launching the site. They are all his own other than a handful written by a friend who wants anonymity.

Occasionally, he knows that some people are fooled, including the time a Winnipeg radio host, Ace Burpee, started talking about a satirical Walking Eagle story about how APTN was going to create a new channel featuring dogs on Indigenous reserves.

"Basically, it was going to be (a channel that would broadcast) 24 hours of dogs going through their lives on the reserves," Fontaine explained, trying to suppress his laughter.

Burpee and his colleagues discussed the story on air, suggesting that it was an interesting concept, while questioning whether it was a good idea, Fontaine explained.

"They were going on about it and (then) in the span of this segment, they did a bit of research on my site and realized what it was," he added. "And so they were fooled by this on air as they were doing their show. That's never my intention to do that, but I thought it was funny."

Fontaine notes that his stories reach large audiences and he has unexpectedly helped educate the population about Indigenous issues.

"I feel like I've made a bigger impact through humour now, than I did as a straight journalist," Fontaine said. "It was never my intention to do that, but I had people, particularly early on, who emailed me and said, 'I didn't know what the punch line was so I looked it up.' So it has the effect of educating people about Indigenous issues and Canadian issues. That's not my goal, but I'll take it."

Sometimes the stories are inspired by real news events, such as a National Observer investigation in April that revealed how public servants were instructed to find a way to approve the Trans Mountain pipeline expansion project, before the government had concluded its consultations with First Nations.

Fontaine’s satirical take on that story was a piece with the headline ‘Kinder Morgan approval wasn’t rigged, we just entered the process really, really, really wanting the pipeline,’: Carr. It poked fun at statements made federal ministers such as then natural resources minister Jim Carr, who said that the process wasn’t rigged.

"What you guys (at National Observer) proved was what a lot of people felt," Fontaine said. "They were going to approve this anyway. You can enter a process all you want but if your goal is already made up then that's going to be the outcome."

But not all of his stories have been well received.

Fontaine had to apologize and retract a story that ridiculed "an inquiry into the inquiry," in reference to the federal government’s inquiry into missing and murdered Indigenous women and girls.

'Just my sense of humour'

Overall, he says he’s surprised to see how popular the site has become and he has no detailed plan of where to take it next.

"Some of these are jokes that I've been saying for years in my own way. And so I finally had a home for them where I could kind of share them with people," he said. "So that's just my sense of humour and I draw a lot on my career as a journalist and the stuff that I've covered to come up with some of these jokes now. I'm not a journalist any more, but I'm always watching the news, I'm always online, checking stuff out, because, for me, that's fodder. I'm interested in it but I also draw on it to tell these jokes."

He also says he's surprised that no one created a satirical Indigenous news site like Walking Eagle News earlier.

"There's all of these different really well-established satire sites and it's kind of weird that there hasn't been an Indigenous one," he said.

"There's this sort of deadpan, sarcastic humour in a lot of Indigenous communities. When you sit around with Indigenous people and you watch the news, you'll hear some of the comments that people make and that's really what this is. It's kind of a reflection of that sort of sarcastic or just funny way of looking at the world.

"Some of it is gallows humour because a lot of the topics are pretty serious but that's basically what it is. And that's where it came from and I guess that's why it's successful because people can see the humour and people can understand what it's getting at."