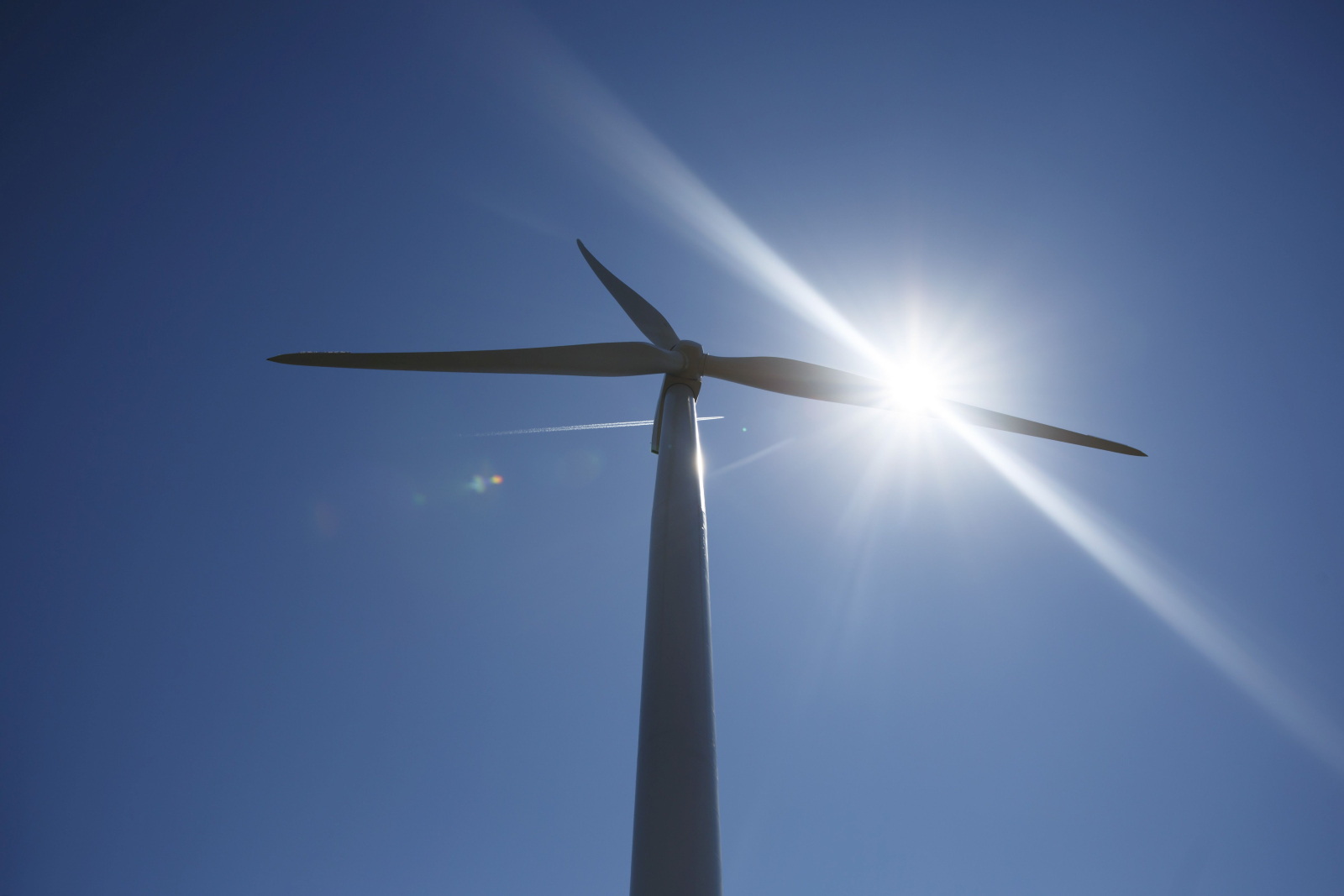 A windmill blade against the sky at the White Pines Wind Farm in Ontario, July 19, 2018. Photo by Cole Burston
Previous story
Next story

The fate of a proposed wind project on Quebec’s North Shore is up in the air amid resignations at Hydro-Quebec and signals from Francois Legault's new government that it is doomed.

Penner supported the proposed construction of the Apuiat project, a 200-megawatt wind farm being developed by the Innu Nation in partnership with renewable energy developer Boralex not far from Port-Cartier, a town 600 kilometres northeast of Quebec City.

This put him at odds with Eric Martel, Hydro-Quebec's president and CEO, who wrote a letter to Apuiat stakeholders in August saying that the project would incur up to $2 billion of losses for the utility provider.

Hydro-Quebec would buy power from the wind farm under a provisional agreement made with the Innu Nation, a group that represents all nine Innu communities in Quebec, and Boralex in late August. It had been agreed to wait until after the Oct. 1 election to finalize the deal. The farm would cost $600 million to build and would create 400 jobs during the construction phase.

After a technical briefing last week with representatives of Boralex and Innu Nation, Energy Minister Jonatan Julien was scheduled to meet Innu leaders Thursday and Friday to discuss the project.

Hydro-Quebec spokesperson Louis-Olivier Batty told National Observer that, contrary to reports, the project is not off the table. The utility provider is “open to discuss various options," he said. It is “looking for a project that is profitable for Hydro-Quebec but is also win-win for Hydro-Quebec and our Innu partners,” he explained.

“No decisions have been made at this point,” he added.

However, cabinet spokesperson Ewan Sauves told National Observer that the "project is not profitable" and that his party's position "has not changed." He explained an official decision will be announced only after the government meets with "all partners and First Nations."

The Innu Nation and Boralex ​​​​​said in a joint statement last week that they were “surprised and disappointed” to find out through press reports that the government planned to override the current proposal. They had not yet had the opportunity to present the project to the new government, they said.

Boralex spokesperson Julie Cusson told National Observer on Thursday that the company is "really hopeful" that once the new government "opens the books, opens the discussions with us, they will see its a very positive project, not only for Innu Nation but for the Quebec economy as a whole."

What is Plan B?

TVA Nouvelles reported on Friday that people within Hydro-Quebec believe the cost of the wind farm’s energy could be reduced in a “significant” way by eliminating Boralex's involvement and making Hydro-Quebec the project's co-owner. Boralex currently has a 50 per cent stake in the project's profits.

The speculation was buoyed by a press conference held by minister Julien at the National Assembly on Friday, Nov. 2. When questioned by reporters about whether the state utility provider could become part owner of the wind farm on Friday, he said “Hydro-Quebec and the government are looking at all the options.”

Boralex's Cusson said that the company had not heard anything official to corroborate reports that the project is doomed. "The government keeps telling us its not the case, they want to talk to the stakeholders, and first of all to us, as partners as the project. Which is why last week we had technical meetings last week and there will be political meetings over the course of the next weeks."

The Innu Nation took to Twitter to reaffirm Boralex's involvement.

Hydro-Quebec spokesperson Batty told National Observer on Thursday that the news reports were “speculation” and that the state utility provider is not considering purchasing the wind farm at present. "It’s not what we are looking for because we are currently have situation where we have energy surpluses. It’s not profitable to develop energy production, be it wind or solar,” he said.

As to whether a falling out out over Apuiat was partially responsible for prompting the resignations of Cormier and Penner, Batty declined to comment.

Ghislain Picard, regional chief for Quebec and Labrador of the Assembly of First Nations, told National Observer on Thursday that he will be watching developments closely. According to him, the project is important in that it “sets the stage” for future relationships between Quebec’s new government and First Nations communities. The way this issue evolves, he explained, is going to “impact [AFNQL’s] attempts in engaging Quebec as a provincial government.”

Picard said he met with Legault and his minister for native affairs, Sylvie D’Amours, in late October and they agreed on a number of issues, in particular that “economy for and by First Nations is very key.”

Apuiat is a good example of this, he said. The Innu Nation are not just partners in the wind farm, but have been its developers from the very start. “This is a project that helps the Innu Nation build itself," he said. "Nation building is about communities having access to their own economy."

Alain Thibault, mayor of Port-Cartier, told National Observer on Thursday that he was behind the project and supports the Innu Nation.

The project will generate construction jobs and have immediate economic spinoffs for the Port-Carier community, he said. The construction of a hydroelectric complex on the Romaine River will be complete in the next 15 months and local construction workers will want a new assignment.

Thibault added that the “unifying” project “is part of a reconciliation process between the Innu Nation, the government and the general population. It’s the front door for the government [in that process] and its in the government’s interest to come to an agreement."